Prada to unveil ad campaign and a new capsule collection of eyewear tonight. 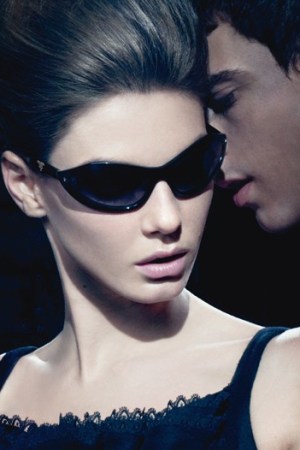 Both projects will be unveiled globally tonight in New York at Joe’s Pub, one of the city’s better-known jazz clubs. The $245 eyewear will arrive in stores in October and meld the retro femininity of the Fifties with a Nineties’ minimalism. It will be carried in all Prada stores and in Luxottica’s Sunglass Hut retail chain.

The new undertaking comes with an artsy perk — a collaboration with international comic-book illustrators. Prada has lured a roster of participants, spanning well-known comic-book-design schools and independent illustrators, who will design their fantasy heroine. The requirement? That Prada Swing shades are worn in the strip. Submissions can be made from July 14 through Aug. 31, and the winning heroine will become the protagonist of a Prada comic.

The new fall campaign was filmed by Steven Meisel at Joe’s Pub. Inside the smoky and ink-blue-lit locale, male and female models dance provocatively, showing off their winter clothes and sunglasses. Done up as a latter-day nightclub singer, model Angela Lindvall performs “Fever,” her hair swept up in a beehive bun and her eyes heavily made up. Stills of the video serve as Prada’s fall campaign. “We wanted to give continuity to the essence of the fall collection throughout all the product categories, and we really liked the idea of men and women interacting in a real context,” said Stefano Cantino, group communications director.