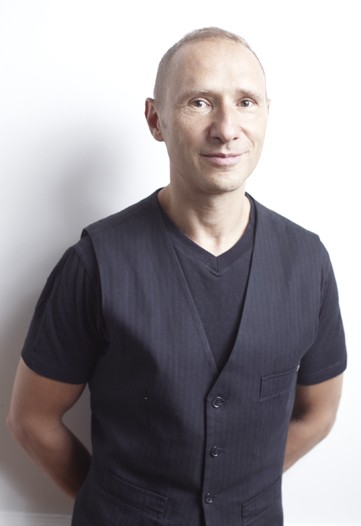 Philippe Apeloig is a man out of time.

The graphic designer and typographer defiantly closes his eyes to trends and fashions of the moment. He draws inspiration for his work from a more than occasional look at the paintings and urban architecture that move him — and from a place he described as his “own world.”

Yet one of Apeloig’s current projects is designing the poster, catalogue and signs for a fashion retrospective, “Yves Saint Laurent,” encompassing 40 years of the fashion designer’s creations, which opens March 11 at the Petit Palais in Paris. Apeloig admitted he had some catching up to do. “I didn’t know so much about Yves before,” he said.

For Apeloig, 47, this has meant hours of reading, viewing images, and visiting fashion closets rife with Saint Laurent’s work. “It is magical to see it is a means of creation, freedom and then an incredible, rigorous way of producing things,” he said.

The Parisian graphic designer, whose work is in the Museum of Modern Art’s permanent collection, was in New York recently to visit the French Institute, whose fall festival poster, catalogue and promotional pieces he designed, incorporating dot drawings referencing pointillism.

While noting the brief shelf life — scant days or weeks — for the typical poster, Apeloig also conceives a poster as “a timeless moment” based in a broader concept than an event itself. The poster he created for the Saint Laurent show, for example, shows a large-scale version of the Yves Saint Laurent logo, originally designed in 1961 by Adolphe Mouron Cassandre. It’s Apeloig’s nod to Mondrian — and the Mondrian-inspired dress of the French fashion designer.

The colors of this YSL logo flow from white into red, yellow and blue. “They are the colors from the Mondrian dress he did, exactly in the same proportion,” Apeloig said. “The face of Yves Saint Laurent is treated with a big screen, almost like Pop Art,” he added of the subtle pattern he placed on the black and blue portrait of the designer, who fills up the poster, gazing off to the right.

WWD: In an age skewing to visual images over the printed word, what is the impact on typography’s role in the media and marketing?
Philippe Apeloig: There are two answers. The first is: Who cares about the quality because everything is created to disappear right away? We don’t keep anything anymore. It’s on the screen; it’s made to disappear. That’s a kind of danger for the quality of the composition. On the other hand, because technology goes on a high level in sophistication, then we can expect the typography would follow that sophistication.

WWD: You mentioned on your Web site [apeloig.com] that you see advertising as having a negative effect on typography.
P.A.: What is more important for the advertising world is the image. The text is on the second level. You don’t need photography to make advertising. It’s unique when you see advertising done only with typography. New, fresh, risky. Most of the time [advertising] is nothing that’s surprising you, unfortunately. It has a lot to do with our civilization and our culture, which is based on image and not abstraction.

WWD: Does it matter to people if we go more and more down this route?
P.A.: The advertisers, because they go through so many marketing steps, do not care enough about the design. They care about what the market is.

WWD: What have you seen lately that has inspired you or excited you?
P.A.: Painting. That’s where I find inspiration, emotion. It’s always surprising me. Monet was a fabulous painter. Titian, Veronese, Georges Seurat, Juan Miro. From the modern times, Ellsworth Kelly, Sol Lewitt.

WWD: Have you seen any eye-catching advertising recently?
P.A.: No. I’ve learned to not watch. To clean your vision it is important to be able to not look at everything. There is so much pollution.

WWD: What do you look at?
P.A.: Architecture in the cities. I’m interested in seeing signage for people in buildings — something connected to the buildings — more than advertising.

WWD: What is noteworthy in the ad world?
P.A.: You can change the way people behave, by advertising, if the advertising is well done. If it’s creative, respectful to the people. If it’s new.

WWD: How is the digital age influencing typography?
P.A.: The type can evolve. Maybe smaller or maybe faster; maybe the alphabet can change. These are very slow changes. If you look at the books of the Middle Ages, who can read that? Only specialists, because the shapes of the letters are so different than today’s. There are also some new letters that are coming. Like @. Fifteen years before, who used that symbol?

WWD: Have you done work for fashion brands?
P.A.: Right now, one of my main works is to prepare the exhibition about Yves Saint Laurent’s work. I’m doing the catalogue, the signage for the exhibition, the poster — all the communication and publications. Yves Saint Laurent said: “Fashion is not art, but you need an artist to make it.” Looking at all his worlds is stirring, is inspiration. He was a total artist, from A to Z.

WWD: How so?
P.A.: Because he put himself in so many risks. It was inspired by the art world: Braque, Matisse, but also from the world culture, from Africa, from Russia, from Asia. The vision he had, to bring art into fashion on such a strong level, is unique. On top of that, he changed the vision of women’s fashion. He put them in trousers, he gave them the power. He was a fabulous character. He has a lot of connections with the spirit of Pop Art. Being totally in his time, analyzing his time; trying to understand the expectations of women.

WWD: How did you become interested in the project?
P.A.: What impressed me the most was when I had a chance to see the work he did to the dresses — they set them in specific closets. I never saw such costumes or dresses in my life. It’s not something you wear every day. Then you realize it’s the color, the material, the cut. Such a huge amount of work. There’s no detail that will be forgotten.

WWD: You’re designing some fashion books as well?
P.A.: I’m doing one about Chanel, right now, a new edition of “Eternelle Chanel,” by Jean Leymarie, (Les Editions de la Martiniere: 2010). I did two books about museums, one about the permanent collection of Le Louvre, “400 Masterpieces” (HNA: October 2008), and one about a new museum, the Musée du quai Branly, a museum designed by Jean Nouvel, about world culture — Africa, Oceania [Asia, the Americas. It opened in 2006].

WWD: What is the sensibility of your work for the YSL exhibit? What informs the catalogue, the logo, the signs, the poster?
P.A.: First of all, it’s one of the things I love to do the most, to design posters. It is like bringing a piece of art into the street. I design them like paintings. It is because I am not a painter — it was one of my dreams. The way I can describe the poster is it is always focused on typography, structure, texture — a lot different textures — and movement. You catch something. If I were to be an architect, it would be superstressful to do something that would stay forever; longer than my life. With posters, you have so many chances to make it better the next time, because it just disappears.

WWD: In your video [at Paris’s Espace Typographie in August] with Marc Gobé [founder of Emotional Branding], you talk about posters in the context of something lasting.
P.A.: When I’m designing them, I think of timeless images. I am totally focused on my own world. I am not trying to follow the trend, the fashion of what’s going on. It’s a real pleasure to do posters, because of the large scale. Everything is important. It’s like what I was describing about the dresses by Yves Saint Laurent. There’s no detail you can forget.

WWD: Was the exhibition’s name changed?
P.A.: I changed the title of the exhibition. When I did the competition [for the project], the title was “Yves Saint Laurent: 40 Years of Creation.” It was too long. It was not that interesting. I didn’t want to have that on my poster. So, I have the logo YSL and the only thing I put in big white letters is “Yves.” His first name, like he’s a friend. Right now, in Paris, you have a big exhibition about Renoir. The exhibitions about Renoir, you have them every five or 10 years. An exhibition about Yves Saint Laurent, there’s one, and that’s it. I think we will all be dead when they do a second one.