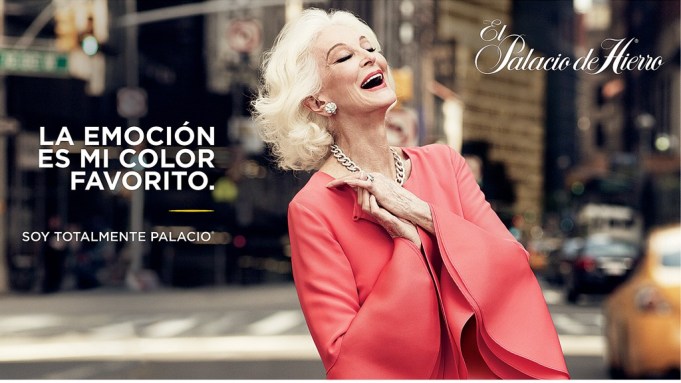 El Palacio de Hierro took a leap forward when it released its Soy Totalmente Palacio campaign in 1996. It was a breakthrough, initially depicting fashionable women, an aspirational message with witty catch phrases and surreal imagery depicting the chic set.

It caught on to such a degree that the slogan has become part of Mexico’s vernacular, so when someone says to you, “Soy Totalmente Palacio,” it’s an expression of praise or admiration, suggesting that you are very stylish.

“From the very beginning, it was a very different message for a department store, much more about branding, lifestyle and image than about selling,” said Carlos Salcido, chief marketing officer. “We started building up this campaign — 1996 to 2003 were its strongest years. In 2010, it shifted to being more about style, and to women and men of different ages.”

Palacio even got Carmen Dell’Orefice, the 82-year-old model famous for her shock of white hair and legendary cheekbones, putting her face on billboards and in print initially and on TV ads in 2011. Carmen, as she is known, caused a stir in Mexico. El Palacio had never used her in a campaign before, and she was virtually unknown in Mexico — though she has been shot by some of the biggest names in fashion photography, like Cecil Beaton, Irving Penn, Richard Avedon and Norman Parkinson. Solve Sundsbo did the photography for El Palacio de Hierro.

“She got everybody talking. Everybody was asking, ‘Who is this stylish woman?’ And how amazing we were featuring a woman of that age,” said Françoise Lavertu, communications director for the retailer.

Carmen is still integral to the advertising. A recent shot features her in a red Gucci dress with the quote “Color is my favorite emotion.”

“We needed to talk to all ages, really stylish people, and use not really recognizable people,” Salcido said, explaining the rationale for selecting Carmen. “She is very aspirational and beautiful still, and quite unusual. That’s the uniqueness. It’s daring to use Carmen, but whether it’s an 80-year-old woman or a 20-year-old guy, we are really talking about style and touching many targets.”

“We don’t retouch her,” Lavertu added. “We use the normal filters, and she does her own hair and makeup.”

The marketing effort at El Palacio, executives say, steers toward conveying image and brand information, rather than price or discounts. “We don’t try to sell. We try to engage,” Lavertu said.

Aside from media campaigns, a major part of the marketing and communication team’s efforts centered on creating La Gaceta, the company’s twice-monthly newspaper, which is distributed every other Monday to top-spending El Palacio credit-card holders and in stores, promoting brands, designers and special events.

The team also creates El Libro Amarillo, published twice a year. It’s an editorial style guide with a shopping guide inserted. Catalogues revolving around holiday selling like Mother’s Day, Father’s Day and Christmas, or specific categories such as gourmet, technology or home, are also part of the strategy.

A big project being planned is integrating customer data attained from social media, e-commerce and credit card transactions to build a stronger customer relationship management program so, as Lavertu put it, “We don’t work in silos anymore.”

In addition, the team helps brands find their way and their voice in Mexico, working like consultants to help international labels negotiate positions in different digital, broadcast and print media including social magazines like Hola and stage press events and launches. El Palacio has worked with many brands in this manner — Ugg, Burberry and Michael Kors, to name a few. As a by-product, executives feel better partnerships are formed.

The agency of record for El Palacio de Hierro is TeranTBWA, which has worked for the store since 1947, creating campaigns, catalogues, graphic designs and ads.

“The real change for El Palacio started in 1995, when the chairman gave us a clear strategic direction: to differentiate,” said José Alberto Terán, chief executive officer of the agency. “Mr. Baillères expressed to us that everything looked the same: the sales, the promotion. Not much about the store itself or the brand was different. The competition then was very similar.”

From 1995 to now, “Palacio has really embraced that strategy of differentiation,” he added. To develop the Soy Totalmente Palacio campaign, the agency took a thorough examination of how women are portrayed in advertising.

“They’re the daughters, the wives, the mothers, but not really portrayed as themselves,” Terán said. So the idea became to talk about women as women and what makes them tick.

Carmen thinks it’s a matter of respect. “Outside of this country [the U.S.], one runs into respect for age, respect for achievement and knowledge,” she said. “There’s no age prejudice there. It has to do with being the best, the healthiest, the kindest. That El Palacio adopted me was such a great compliment.

“We’ve been talking about developing in-store labels and products, possibly called Carmen’s Choices or Carmen’s Corner,” she added. “I have a continuous dialogue with them. I’m in front of the camera whenever they think it’s appropriate. The campaigns are for the ‘arrived woman’ who is nameless and timeless and ageless.”

One commercial is titled “Plenitud,” which translates into “prime of life.”

She admires the stores and how they’re merchandised. “In every department, there’s a kind of link to an imaginary life we aspire to,” she said. “It helps people think outside the tawdriness of their own little lives.”