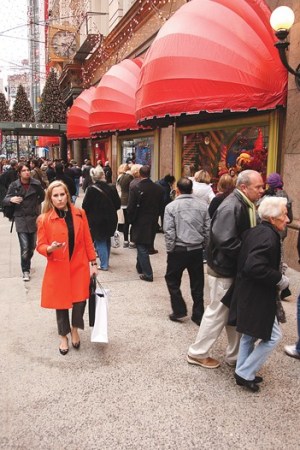 Game on — and retailers don’t want to take chances with the fragile consumer psyche.

After more than a year of recession fallout that made holiday 2008 a retail Waterloo, stores will put their austerity strategies to the stiffest test when the season moves into high gear on Black Friday.

But the mood of shoppers is a stiff challenge, although after a year of tightened wallets and economic hardship, there is a perception of some pent-up demand among consumers that could benefit stores. (See story, opposite page).

Lew Frankfort, chief executive officer of Coach, said consumers have been trained to wait for sales, and the response of retailers to that face-off will dictate the tone of the holiday.

“While Coach does not go ‘on sale’ in our retail stores, we do expect that the atmosphere will likely remain very promotional at retail, irrespective of cleaner inventories, as the customer has been trained to wait for promotions,” he said. “We’re confident that this holiday will be better than last.”

Even as the consumer “is feeling somewhat better about the economy…she is looking for innovation, relevance and value — prices need to make sense,” Frankfort said. “She is also looking to be surprised and delighted. Playing it safe won’t work for retailers.”

More stores are opening on Thanksgiving Day and the deals will continue until Cyber Monday, traditionally the busiest day for e-commerce. Wal-Mart Stores Inc., applying price-cutting pressure on all fronts as it seeks to grab the biggest chunks of consumers’ disposable incomes, will get a jump start on Thanksgiving Day when it offers 50 online-only specials with savings of as much as 40 percent on electronics, video games and toys.

“The starting gun is firing earlier,” said Bill Lewis, executive vice president of Karabus Management. “The race is much more value driven with more online advertising. Consumers are using mobile devices to check prices. The consumer will comparison shop more and exchange more to get the best price.”

Since mid-November, Sears Holdings Corp. has been advertising “Black Friday Now” doorbusters each Saturday on products ranging from home electronics and jewelry to apparel. The retailer, which is also touting its layaway policy, is suggesting customers reserve their gifts early, pay for them over time and pick them up right before the holidays. A Black Friday VIP Sweepstakes on Facebook and Sears’ Web site gives winners a $500 gift certificate and the chance to shop the retailer’s Black Friday deals today.

Kohl’s Corp. will have more than 300 items specially selected for Black Friday. Stores will open at 4 a.m. that day. The company is also offering specials on its Web site beginning at midnight on Friday.

Sam’s Club will open on Friday at 5 a.m. and serve a hot breakfast to members only, along with savings on 40 items. Advertised specials include Vizio 47-inch LCD TVs for $997; a three-piece 1/3-carat diamond and sterling silver bracelet set, $148, and toys for $15 and $20.

And, borrowing a page from the mass crowd, Lord & Taylor for the first time will open at 5 a.m. instead of 7 a.m. Mary Beth Sheridan, executive vice president of stores, said the retailer is responding to the competition. Also on Friday, L&T will give doorbuster gift cards good for $20 off on purchases of $40 or more to early-morning shoppers.

Sheridan said L&T is doing what it takes to gain share. “We looked at what happened last year and thought it through,” she said. “We asked what time our core customer will come out, not necessarily when Wal-Mart is opening. And we looked at the best way to hand out the doorbuster cards and handle crowd control.”

In its third-quarter earnings conference call on Nov. 11, the company said it was slightly positive about the fourth quarter.

“We are encouraged by recent trends and now expect the fourth-quarter sales to exceed our prior plan, as sales did in the third quarter,” said chief financial officer Karen Hoguet. “We are now assuming that comp-store sales will decline in the fourth quarter only 1 to 2 percent. This would translate to minus-2.1 percent to minus-2.6 percent for the fall season, which is obviously much better than our prior guidance of minus-5 to minus-6 percent.”

Retailers have strategized this year to avoid a repeat of last season, which was notable for markdowns of as much as 60 to 80 percent as retailers sought to move overstocked inventory amid the throes of the economic meltdown.

However, with unemployment at a 26-year high of 10.2 percent, home foreclosures rising and the economic recovery struggling for traction, Karabus Management’s Lewis said there will be deeper promotions to get customers into stores as the hunt for value dominates.

“Retailers are trying to make their margins back on the balance of the [merchandise],” he said. “The new guiding principle is the need for the majority of sales to be profitable.”

Many of Wal-Mart’s U.S. stores will be open 24 hours for the day-after-Thanksgiving event.

For the first time, Target stores nationwide are opening an hour earlier at 5 a.m. on Friday. This is the first holiday season Target is matching competitors’ prices, excluding limited-time sales like early-bird sales and doorbusters. The first 500 shoppers will receive a free reusable Marcel Wanders shopping bag. Consumers who spend $100 or more on Friday from 5 a.m. to noon will get a $10 Target gift card, a spokesman said.

Projections for the season are uneven.

Apparel has lagged in the recovery, but on Thursday, J. Crew Group Inc. provided some hope for holiday when it reported profits more than doubled in the third quarter as sales advanced 14 percent. The retailer forecast fourth-quarter profits of 37 cents to 42 cents a diluted share, compared with a loss of 22 cents a share a year ago.

The National Retail Federation is projecting a 1 percent decline in holiday sales to $437.6 billion. The NPD Group forecast 0.5 to 1.5 percent growth with a focus on traditional gifts such as sweaters, fragrance, music, books, movies and wallets. Karabus Management is estimating flat to 1 percent growth. All of those forecasts would be an improvement from the 3.4 percent drop in sales last Christmas.

“While Black Friday is still an important business indicator, it is not an obvious one,” said Marshal Cohen, chief industry analyst at NPD. “There may be some panic when the rush seems lighter than in past years, but based on our holiday market research, that doesn’t necessarily mean less business in the long run.”

In addition, consumer confidence took a positive turn this month, rising to 49.5 from 48.7 in October, as fewer shoppers surveyed by The Conference Board expected a worsening in the business and labor markets over the next six months.

But shoppers’ read on the current economic situation remained at a 26-year low and retail stocks wavered Tuesday, with the S&P Retail Index down less than 0.1 percent for the day, to 404.02. “Income expectations remain very pessimistic and consumers are entering the holiday season in a very frugal mood,” said Lynn Franco, director of the group’s Consumer Research Center. This month’s 49.5 reading still ranks below September’s reading of 53.4 and August’s mark of 54.5. Confidence bottomed out at 25.3 in February.

The index is compiled from a survey of 5,000 households, and its rise this month came entirely from the forward-looking Expectations Index, which advanced to 68.5 from 67 in October. The Present Situation Index dipped to 21 from 21.1, remaining at levels not seen since 1983.

Respondents expecting business conditions to worsen over the next six months fell to 15.1 percent from 18.2 percent, and the number of consumers anticipating fewer jobs fell to 23.1 percent from 26.1 percent.

Retailers are managing their inventories closely. But there are lingering questions about whether efforts to avoid markdowns with less product in the stores might result in sacrificing sales.

“Retailers have controlled their supply chain and inventory levels appropriately,” Lewis said. “In the past, when borrowing and debt wasn’t as much of an issue, retailers wanted to have as much inventory as possible and never miss a sale. Retailers are not allowing themselves to be in a position where too much inventory dictates the need for markdowns. They’re willing to take the risk of running out.”

Michael Gould, chairman and ceo of Bloomingdale’s, is encouraged by consumer response to the store’s offerings.

Gould said there hasn’t been a pressing need to be promotional. “Our inventories are in good shape. We’re less promotional than last year.…Our margins were appreciably better in the third quarter. We’re going to do what’s right for our customer. We’re not going to be discounting cosmetics or any other crazy things people are doing.”

Nordstrom Inc. revised its year-end comp-store sales guidance to a 6 to 7 percent decrease from a decline of 9 to 12 percent.

“We tried to be careful to get our price points really sharp this holiday season,” said a spokesman. “We’re going to be careful about not becoming overly promotional. We don’t feel we’re in a situation like last year, which was such an anomaly in terms of the competitive markdowns we faced. We don’t think we’ll be confronting that to the same degree as we did last year.

“We’re in a strong inventory position and will be able to ensure a fresh flow of merchandise throughout the season. We’ve been encouraged by recent results in the third quarter and October. We’re also keeping things in perspective. We know customers remain cautious, but we’re also seeing our customer responding to newness in our stores. Where there’s great fashion that can be had at a value, there’s activity.”

In the luxury sector, “it seems to take a little less energy to get consumers excited than it did at this time last year, so I’m encouraged by that,” said Michael Celestino, executive vice president of Barneys New York. “We’re less promotional. There seems to be less price resistance. In some cases, prices in the vendor community have come down a little to help things. The consumer who’s wanting to spend a little bit is driving the luxury business right now.”

So far for the season, women’s designer, jewelry, cosmetics and the Co-op have shown strength. “We’ve had success during the regular-price season,” Celestino said. “I’m cautiously optimistic. Some of us feel like we’ve maybe turned the corner. But the economic indicators are a mixed bag.”

The first six months of 2009 were “really tough,” said Susan Davidson, ceo of Scoop. “Our performance has improved from month to month.”

Scoop on Black Friday plans to give customers a 25 percent-off gift card to be used in December. “We’re trying to force them into the store on Friday and giving them a gift card to use in December,” she said. “I don’t think promotions are enough. We will never have as many promotions as the department stores. Last year at this time you were able to buy merchandise at 60 to 70 percent off at Bergdorf Goodman and Saks Fifth Avenue.”

Rather than focus on markdowns and giveaways, Davidson said she’s tried to make the stores more exciting. “I know it’s going to be promotional. It’s a market share game. We have a major focus on an enhanced shopping experience, from visuals to service.”