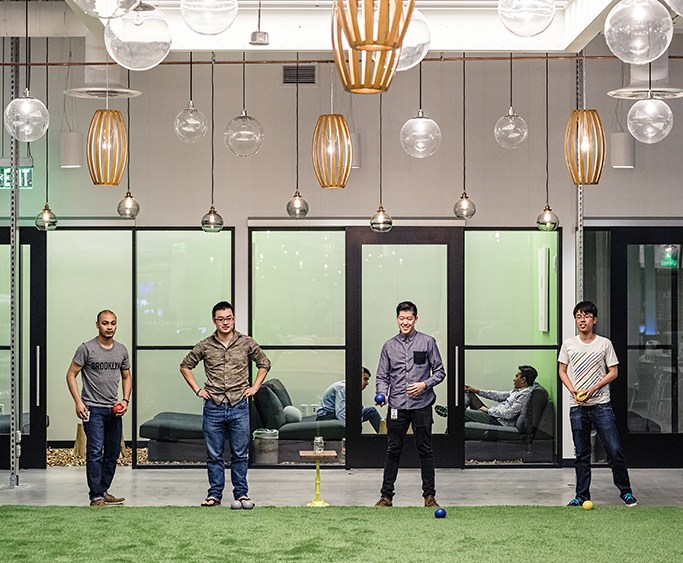 Outlets, coupons and e-commerce are here to stay, but the future of retailing is being invented right now in behind-the-scenes innovation labs.

These “ilabs,” for short, have emerged at retailers and mall developers over the last four years. They’re where digital teams, merchandisers, engineers and marketers vet ideas and test gadgets, apps, visual formats and shopping tools, like “magic” mirrors in fitting rooms, 3-D mall directories and beacons that transmit signals to mobile phones and notify shoppers about deals as they cross the store threshold.

Fears that brick-and-mortar stores are continuing to lose business to the Internet, declining mall traffic and a sense that malls need reinvention have fueled the formation of ilabs. So has the iPhone, introduced in 2007, and a convergence of technologies advancing how radio frequency identification, video, apps and mobile devices can be applied to retail settings.

“Should I even have retail stores anymore?” is the question Al Sambar, managing partner of Kurt Salmon’s consumer and retail practice, keeps hearing clients ask. “We believe that great physical retailing should continue to exist into the future. The point of our 1:1 Retailing Lab is to educate and brainstorm on projects,” and bring the personalized experience of online shopping to the physical store. For Kurt Salmon, the store of the future has a platform for customer presence awareness, product recognition, connected marketing, recommendations on products and services tailored to the shopper in the store. That means store personnel would know what products are being brought into fitting rooms and examined on shelves and that stores could send customers messages on deals, products and events just when people are shopping.

“We’ve been piloting new experiences,” said Kevin McKenzie, chief digital officer at Westfield Corp., which opened its ilab in October 2012 at the Westfield San Francisco Centre. Among its pilots: a program to preorder meals from food courts for delivery, and an app that directs drivers to the nearest available parking spot and lets them prepay fees to avoid the attendant.

On Thursday, Westfield officially unveils Bespoke, a 37,000-square-foot space transforming a big section of the San Francisco center into “an incubator for innovation,” featuring a demo area with robots for video conferencing; interactive digital walls; space to create a pop-up shop; open seating, and private work areas for retailers and tech firms to brainstorm. Bespoke also is being considered for the Westfield World Trade Center mall in Manhattan and reflects the new philosophy at the group, among the world’s largest shopping-center operators. “Retailers have been our customers. Now we’ve got to think about the experience and the consumer,” McKenzie said.

At Macy’s Inc., the Idea Lab formed last summer developed a “group” gifting service that makes it easy for people to chip in on gifts and unnecessary for any one person to do the math. Last year, Macy’s rolled out “image search” technology so customers can snap photos of outfits with their mobile phones, upload them and have the same or similar items from the retailer’s inventory pop up for immediate purchase.

“E-gifting” launched last holiday on macys.com, where a shopper can pick a gift, pay for it, write a note, and send an e-mail, which appears in the form of a gift box that unwraps graphically until the item emerges. If it’s a sweater, for example, the person receiving the gift can change the size or color, or use the value of the gift to select something else online. The recipient can also e-mail back a thank-you note.

Macy’s Idea Lab is “a process, rather than a place,” store officials said. Employees submit ideas about what customers might like, such as a new service or online feature. Ideas are voted on and the most popular ideas are vetted through “a shark tank” process, where those pitching the idea make their case before an executive panel. If approved, the concept advances to the Idea Lab within Macy’s technology offices in San Francisco, where programmers, marketers, software developers, as well as outside tech start-ups get together for two weeks to create a working prototype. If management likes the prototype, a six-week “lean development” process to perfect the concept and get it operating occurs, and then it advances to the testing phase among a small customer set.

“There has always been an attitude at Macy’s about innovation. It’s harder to find the way to do it right,” said Michael Robinson, the retailer’s executive vice president for digital technology and customer experience. “This process is actually allowing us to change the DNA of our product development philosophy, product management philosophy and coding philosophy. We probably have five or six things in the pipeline at any one time. At the core of it, we are trying to find really interesting ways to improve the customer journey and find ways to make that journey more seamless. Our philosophy was not to do what some of our competitors do. Idea Lab is a philosophy encouraging ideas from everyone. Group gifting is a perfect example. It was a great idea that sprung from our finance organization. We had people in finance leave their day jobs for two weeks and enter the Idea Lab.”

Wal-Mart sees itself transcending the lab space. “They are trying to think of themselves as another Facebook or Google and have been in huge acquisition mode,” said Vicki Cantrell, senior vice president, communities, and executive director of Shop.org at the National Retail Federation.

In San Bruno, Calif., WalmartLabs, the discounter’s massive tech-innovation center and the technical component of Wal-Mart Global E-commerce, was formed in 2011 through the acquisition of shopping search engine Kosmix. Wal-Mart, which has since purchased 13 other tech companies primarily to acquire talent, is focused on developing mobile apps, rolling out centers for online fulfillment and thwarting Amazon and its ever-widening merchandise range.

Among Wal-Mart’s most important innovations: the launch of a mobile app for the iPhone, considering 65 percent of Wal-Mart customers have smartphones and about half use them to shop inside Wal-Mart or prepare for a visit; geo fencing, an app that, when opened, prompts consumers to enter a store mode to get coupons and product information, and opening fulfillment centers around the country to get online orders delivered faster. In several markets, Wal-Mart is testing online ordering of groceries that shoppers can pick up without getting out of their car. The company’s technology team at its home office in Bentonville, Ark., is testing technologies to improve deliveries, distribution and transportation practices, and help associates with stocking shelves.

Keeping up with the customer is something retailers of all stripes are interested in.

“There has been a high level of innovation throughout the industry,” Erik Nordstrom, copresident of Nordstrom Inc., told WWD. “I don’t think it’s going to slow down. It’s going to increase. We get inspired by things our competitors do all the time. Everyone is trying to catch up to the customer. They’re ahead of us.”

“Either you innovate or you are going to be looking obsolete pretty quickly,” said Faisal Masud, executive vice president of global e-commerce for Staples, which generates more than $11 billion in sales a year online, making the retailer the fourth-largest e-commerce business in the U.S. next to Amazon, Apple and Wal-Mart. “We are trying to execute faster than in the past,” Masud said. “With whatever changes we make for the customer experience, or for digital assets online, our previous model involved a lot of outsourcing. Our new model involves bringing in the talent,” and opening labs where the talent resides.

“It’s about keeping your life organized and together,” said NRF’s Cantrell.

“Creating an omnichannel shopping experience that’s seamless — we are all trying to figure that out,” Nordstrom observed. “The foundation would be being able to locate merchandise no matter where it sits, in the online warehouse or a store. We’ve had that for a number of years. It’s a simple-sounding thing, but it’s a big investment in technology to enable that. The next step is being able to return online orders to stores. It’s pretty much a customer expectation now, but there are operational issues you’ve got to get through. Moving forward, we know the majority of traffic to our Web site does not result in sales online, but starts ‘a shopping journey’ from online to stores. How do we make that shopping journey seamless?”

Nordstrom’s 10,000-square-foot Customer Experience Center, opened in 2013, is a modular warehouse space to test concepts in a storelike environment, from redesigning departments to visual merchandising, technology and formats, like a new beauty format. Nordstrom customers come to the CEC so the company can learn what works for them or what doesn’t. A new beauty format featuring a beauty concierge, a trending-now station and a play bar was developed at CEC and is in 19 locations currently and will be in 25 by yearend. They’re all in new or renovated stores.

“It feels light, clean and more manageable to shop,” said Nordstrom, noting that the project involved teams from the beauty and customer service departments as well as the CEC and the ilab.

“We saw the conversation about ilabs really take off in 2011 and 2012,” said Kurt Salmon’s Sambar, noting that around that time, Nordstrom put a video of its lab on YouTube telegraphing the notion of innovation in the works; Burberry launched its “store of the future” in London with a lot of digital bells and whistles, and “showrooming” became a hot topic.

Around that time, Simon Property Group, the world’s largest shopping center developer, formed the Simon Innovation Group. “We’re lean, agile and our approach is different. Shopkick was our first big foray a year ago,” said Mikael Thygesen, chief marketing officer of Simon Property Group and a member of the innovation group. Simon has also partnered with Ziploop, which does receipt captures, to create a loyalty program that entitles shoppers to free parking, valet, prizes and special offers at retailers, as well as with eBay on “connected mall” technology seen in the Stanford Shopping Center. It’s a 3-D mapping directory that will roll out to 20 to 30 centers over the next year.

“We like to partner with firms, large and small,” Thygesen said. “We are focused, quick to market and quick to test. We didn’t want to create a large team. We recognized that we couldn’t be experts in every area. It’s better to network.”