No one relishes a cold snap like outerwear makers and retailers, so it's no surprise they welcomed the thermometer's recent drop with glee. 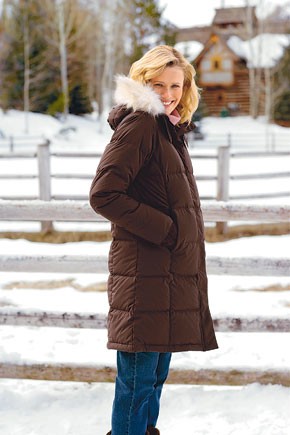 No one relishes a cold snap like outerwear makers and retailers, so it’s no surprise they welcomed the thermometer’s recent drop with glee. In fact, stores are saying coats and other cold-weather gear are standouts so far this holiday season.

Of course, a few, such as Steve Blatt, chief executive officer of the coat maker and retailer Searle, knows that waiting out the weather is half the battle.

“There is nothing like cold weather to help out outerwear. If the weather is right, business is good. If the weather is wrong, business is tough,” he said. “They have been talking about global warming as long as I have been in the coat business — that’s 50 years. Most people nowadays get out early because the dollars aren’t available in January and February for outerwear. They are going to sportswear.”

Searle takes a different tack and hangs in there until customers stop requesting coats. Director of sales and marketing Rick Weinstein said more coats are sold in January than in any other month. Two years ago, the company was still selling coats in its stores in March.

Searle’s signature down coats, which retail from $298 to $798, and Mackage’s coats in the $598 to $698 range are drumming up sales. “It pays to hang in there. We will be cutting coats until the last customer asks for one,” Weinstein said.

That said, the company is giving shoppers added incentives by marking down a little bit of each category by 30 percent.

At Lord & Taylor, LaVelle Olexa, senior vice president, advertising, sales promotion and public relations, said, “The colder temperatures have helped to improve the coat trend after a difficult early fall. While wool fabrications have consistently sold well, the drop in temperatures has helped the down-puffer category, which had been weak.”

In addition, walker-length, fur-trimmed down-puffer jackets in both satin and matte finishes have trended well with the recent cold temperatures, Olexa said. Short down-puffers in both untrimmed and fur-trim jackets also have sold, she said.

L.L. Bean is counting on free shipping, holiday incentives and TV advertising to help boost business in the next few weeks. The Freeport, Maine-based retailer and mail-order business has been offering free shipping since September through its advertising, catalogues and Web site. Last weekend, L.L. Bean rolled out part two of its holiday promotion offering $10 gift cards for orders of $50 or more, now through Dec. 24. L.L. Bean’s bestsellers include the Ultrawarm 3/4 Coat, the waterproof Rugged Ridge Parka and the Baxter State Parka.

“After experiencing a very strong spring season, we saw the same industry-wide softness as other retailers as our fall season began. In addition to the general anxiety around the economy, the unseasonably warm temperatures we experienced in September and October had an impact,” said a company spokeswoman.

“Now, as our holiday catalogues have been landing in-home, and with colder temperatures, we saw some business strength returning in November and anticipate a strong holiday season,” she added. (For more on holiday shopping, see page 21.)

If the late start to fall weren’t enough of a challenge, stores have the added burden of competing against nontraditional outerwear resources like J. Crew, Bloomingdale’s, Brooklyn Industries, H&M and Zara. Each company has made outerwear more of a priority this season. J. Crew and Bloomingdale’s played up outerwear in their respective catalogues. A J. Crew spokeswoman noted how jackets and coats have been featured more prominently than in seasons past.

Weatherproof was so uncertain about the weather that the company bought insurance as a safeguard — something it had never done before. The brand’s business picked up in the past two weeks once the weather returned to more seasonal conditions, Fredric Stollmack, president and ceo said. “If the weather holds as it has in the past few weeks, we should have a tremendous fall season,” he said. “There is more of a wear-now mentality. People are holding off on making purchases until they really need it.”

Short wool coats and down coats in the $100 to $200 price range are fueling sales. While bookings are stronger than they have been in the past three or four years, Stollmack said he is even more encouraged by the fact that business at retail is ahead of last year. “Last year was a disaster,” he said, adding that the warm weather took its toll on the category. He also noted that everything is sold on sale in one way or the other, but in January the prices really drop.

Jody Schwartz, executive vice president of Free Country, an outerwear manufacturer, also addressed the issue of markdowns, estimating stores are offering 40 to 50 percent discounts now and that figure will hit 60 percent next week.

That said, major retailers’ willingness to feature “door busters” — sale items that are offered for a limited number of hours — during the Thanksgiving weekend helped boost outerwear sales. Macy’s featured Free Country’s system 4-in-1 jacket at a promotional price of $140 instead of the regular $200. Aside from the price tag, the garment’s interchangeability was a plus with shoppers, Schwartz said. With an average retail price of $150, Free Country’s down jackets are also popular.

“Stores always promote this time of year — that’s the way it is. They ticket high and promote heavily,” she said. “But we haven’t found promotions to be significantly more than they always are.”