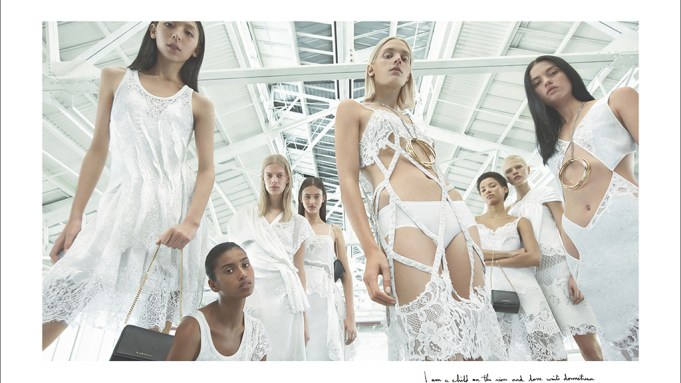 PARIS — Riccardo Tisci put his mantra up in lights in 2015, and in capital letters: “I BELIEVE IN THE POWER OF LOVE” was the sign at the entrance to two of the biggest fashion parties of 2015 — on Sept. 11 following his quietly sensational New York runway show for Givenchy, and on Sept. 25 in Milan to fete the French house’s new boutique in the Italian fashion capital.

The message continues to flash in Givenchy’s spring 2016 ad campaign. One image shows a group of young, fresh-faced models staring down at the floor-mounted camera in Tisci’s frothy, lingerie-inspired collection accompanied by a short text by the singer Antony Hegarty, now known as Anohni: “I am a child on the river, and love waits downstream: A waterfall to steal my breath, and change my mind,” it reads in his tiny, tortured handwriting.

“He’s a poetic person, and in a few words, he said everything,” Tisci marveled in an interview, unveiling his latest advertising effort exclusively to WWD. It is slated to break in a range of March magazines.

For a designer who sees fashion as an outlet for emotion and Givenchy campaigns as a vessel for provocation and even social change, the spring campaign dovetails with his conviction that messages of love are infectious and impactful.

“Everyone can do something very small, some gesture of love. I’m not saying this will change the world, but the world will be better. I’m a big believer in positive energy, and I’m sure this energy will spread,” he said. “People have given me so much love and so much respect and this has helped me to grow.”

Tisci confessed some people frowned on him, or were at least puzzled, when he first sparked up his Instagram account and immediately started labeling his posts with hashtags including #love and #family.

Perhaps he was just ahead of the curve. To be sure, the spring campaign, shot by Givenchy regulars Mert Alas and Marcus Piggott, also exalts Tisci’s sharp instincts for discovering new modeling talents — and for being very faithful to them over time.

Tisci acknowledged the models caused a stir when they assembled on the streets of lower Manhattan, one of several locations for the sprawling shoot.

“It was a very big production: 27 models. That’s a lot of people,” he said. “But at the same time it was fun because it’s like family. Everyone was happy to be there.”

The designer noted that the expansive, multigenerational, multiracial cast echoed the message of unity and diversity of his spring catwalk, accompanied by music from a variety of religions. The diverse casting of the spring campaign also reflects Tisci’s ambition that Givenchy — which spans everything from elaborate couture gowns to sneakers and backpacks — can outfit a broad range of women from various age groups and lifestyles.

He also noted that the low camera position echoes images of protesters in the Sixties and Seventies, heightening the suggestion of “revolutionary women, powerful women.” The perspective and group means that all campaign images will run as spreads.

Collaborators on the main Givenchy campaign include Giovanni Bianco for art direction, Carine Roitfeld for styling, Orlando Pita for hair, and Lucia Pieroni for makeup.