Entertainment is part and parcel of retail, according to industry gurus dating back to the late Stanley Marcus, so how about a little rock 'n' roll? 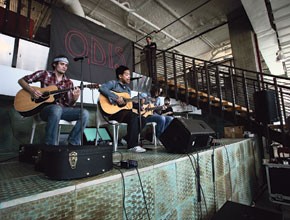 Entertainment is part and parcel of retail, according to industry gurus dating back to the late Stanley Marcus, so how about a little rock ‘n’ roll?

Live music is part of the scene at LFT and Counter Culture, two Dallas fashion retailers that aim to attract clientele by hosting local bands.

The connection is particularly strong at LFT because the top men’s wear salesman, Larry Gayao, happens to be the lead singer for Odis, which released its first album last month at the store. As Odis played its original rock ‘n’ roll tunes, LFT served beer and wine.

“We push it and they push it,” said Patrick Ware, store manager. “Larry’s been on the radio talking about it, and Odis drives the business a lot because they have their followers.”

The store offered a 10 percent discount to shoppers who held tickets to Odis’ show that night at the House of Blues, an incentive that proved effective, Ware said.

“It’s a cool fusion of rock and fashion because, in the end, that’s what it’s all about,” Larry Gayao said. “It is amazing to be in the band and also selling clothes to these people, because it works. They are my customers.”

The band wasn’t paid for its one-hour show, Gayao noted, “but they swing us some swag.”

“We were trying to go for the jugular by getting people to come out,” Gayao said. “The only problem with inviting people to a store this high-end is you get kids who have no money. I try to direct invitations to people who will also shop.”

“I like it because we get repeat business from people who wouldn’t ordinarily come to the store,” owner Monica Wood said. “We have their friends and family, and it brings in foot traffic.”

Counter Culture is located at Mockingbird Station, a mixed-use center, and Wood plans to move the bands outdoors to the plaza in front of Angelika Film Center. It’s a good idea, as some tenants renting lofts above the store have complained about the noise.

Both stores promote the shows via e-mail blasts and MySpace.com.