Salvatore Ferragamo Pledges to Restore a Series of Sculptures in Florence

The fashion house will donate more than 1 million euros for the restoration of large sculptures adorning the city's Piazza della Signoria.

Ferruccio, Giovanna and Leonardo Ferragamo posing with the Mayor of Florence Dario Nardella and the institutions in front of the copy of Michelangelo's David standing in Piazza della Signoria.

FLORENCE — Salvatore Ferragamo is strengthening its relationship with Florence by pledging more than 1 million euros to fund the restoration of a series of large sculptures adorning the city’s iconic Piazza della Signoria.

This follows the 1.5-million-euro donation the fashion house made to restore the Fountain of Neptune sitting at the heart of the very same square, which was unveiled last year.

“Here we are again, we are proud to make another donation,” said chairman Ferruccio Ferragamo during a press conference held Tuesday in the richly frescoed Cosimo I hall in the city’s Palazzo Vecchio. His sister Giovanna and brother Leonardo Ferragamo, as well as the company’s chief executive officer Micaela Le Divelec Lemmi, were also in attendance.

“Our company has always recognized the strong bond between fashion and art. Since he founded this business, my father Salvatore understood the close relationship between these two worlds in terms of research and creativity. Over the course of his career, he found inspiration and brilliant new ideas in the various expressions of art,” he said.

“This relationship with art, with the city of Florence and with all of its surrounding area has always been in our DNA and our decision to support the restoration is a way for us to continue on the path that my mother and father first charted,” he added, also thanking “all those who work for this company because with their work they have contributed to financing this project.”

In particular, over the next three years, the fashion house will fund the restoration of both the copy of Michelangelo’s David standing at the entrance to Palazzo Vecchio and the one in bronze located in the Florentine Piazzale Michelangelo square. In addition, the equestrian statue of Cosimo I de’ Medici by Giambologna, the statues of Hercules and Cacus by Baccio Bandinelli and the statues of Judith and Holofernes will be restored, among others.

The restoration works will kick off in June with the restoration of the bronze copy of David that will require 300 days and the highest financial commitment of more than 368,000 euros, closely followed by the equestrian statue of Cosimo I de’ Medici, which will require 180 days of work and about 233,000 euros. All works are expected to be completed by the beginning of 2022. 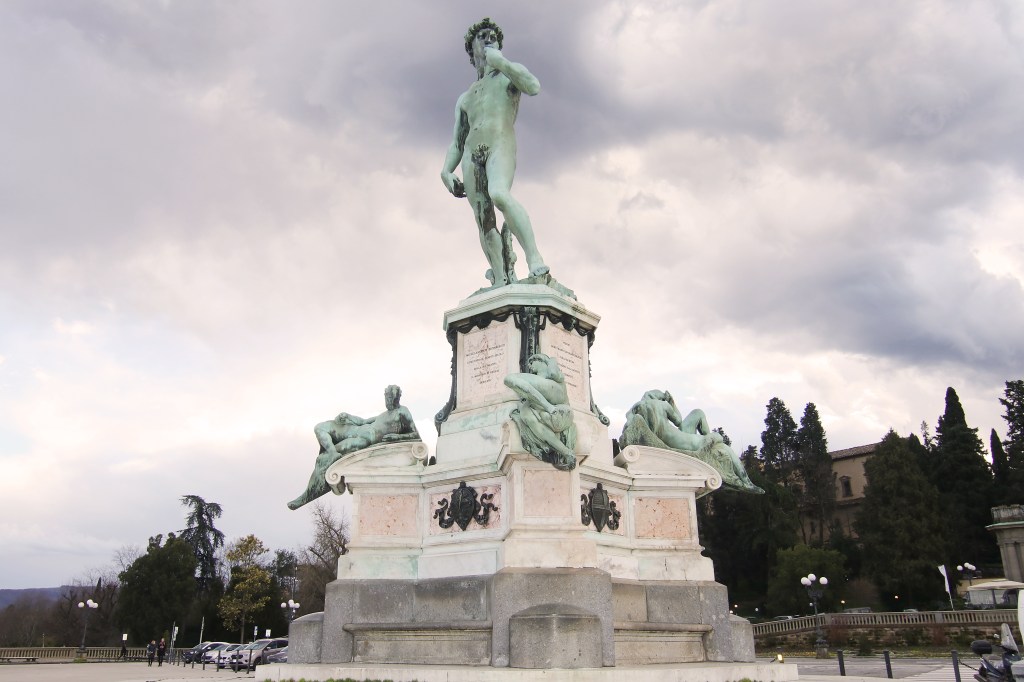 “The global landscape in these days is very different, we are concerned about the situation both health-wise and in terms of economical impact, so we are even more glad we managed to proceed with this donation, and hopefully we will continue to do others in the future, to reward Florence of all the things it has given to the Salvatore Ferragamo Group,” concluded the company’s chairman, referencing the spread of the coronavirus.

Asked about further impacts the health crisis might have on the brand’s business, the executive said it’s complicated to evaluate them at the moment.

Ferragamo’s new 1.1-million-euro investment was favored by the Art Bonus law, introduced by the Italian government in 2014 to encourage the patronage of the arts. As part of the program, tax deductions are granted to private institutions making donations to restore, support and develop cultural activities.

“Art Bonus is a great law, giving a fantastic opportunity to private [institutions] to contribute in safeguarding the beauty of this city,” Ferragamo said.

“The Art Bonus projects shared with Ferragamo are among the most important made in Italy, also due to the Ferragamo family’s ability of identifying monuments of significant relevance,” echoed the mayor of Florence Dario Nardella.

“The Art Bonus program is one of the best measures introduced in the last couple of years, it has really given us a boost. Our municipality received 9 million euros in fundings since the law has been approved…2.5 million euros of which were donated by the Ferragamo company. So I double thank them, both for the quality and quantity of their commitment,” added Nardella, who defined the new restoration project as “ambitious, complex and demanding.”

“This is an important day, marking once again the special bond Florence has with the Ferragamo family, a relationship that has grown on many aspects, from the touristic promotion and educational support to our Polimoda university to cultural aspects, also promoted by the incredible work of the Ferragamo museum….We all have to believe and bank on culture, it’s not the cherry on top of a pie but it’s the actual cake and this approach is one we share with the Ferragamo family,” concluded Nardella.

For the Salvatore Ferragamo Group this is just the latest step of giving back to the city housing its headquarters, as the company has financed other major restoration projects over the years, including allegorical statues on Ponte Santa Trinita in 1996; the Column of Justice in Piazza Santa Trinita in 1998, and the eight rooms in the Uffizi Gallery in 2015. In addition, the group has established the Museo Salvatore Ferragamo at Palazzo Spini Feroni, headquarters of the brand.

In return, last year the Italian city honored the fashion house’s late founder and his wife Wanda, who passed away in 2018, naming a square after them, acknowledging their contribution to the economic and cultural development of Florence, where the business was established in 1927.

In particular, the “Piazzetta Salvatore e Wanda Ferragamo” sits in the heart of the city between Ponte Vecchio, Via dei Bardi and Via Guicciardini, a five-minute walk from Palazzo Pitti and the city’s museum dedicated to fashion and costume.