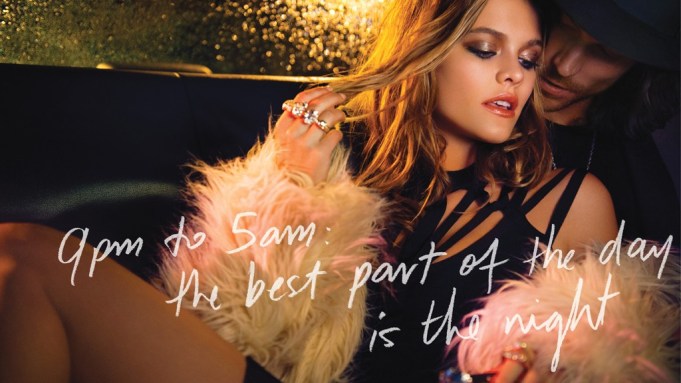 Bebe is amping up its sex appeal — but knows where to draw the line.

That’s according to Steve Birkhold, Bebe Store Inc.’s chief executive officer, who likes to reference his company’s $10 million campaign that kicks off this Wednesday by saying, “For the Bebe girl, nine-to-five means 9 p.m. to 5 a.m.”

Since last January when he joined Bebe, Birkhold has revamped top management, recruiting Katrina Glusac as chief merchandising officer; Brigitte Bogart, executive vice president of design and product development, and chief digital officer Ben Baum, among others. Now he’s orchestrating shifts in the design, merchandising and marketing to hone in on women, ages 25 to 35, who take their evenings out on the town very seriously. They’re often digitally savvy and on the computer, but couch potatoes they’re not.

Fashion-wise, the emphasis is on body-conscious silhouettes, cropped tops, tight sweater dresses, and short black dresses with cutouts and sequins. “It’s about anything that is sexy, not trashy,” Birkhold said. There’s a fine line between the two, which Bebe has crossed at times. Yet for many years, Bebe, founded by Manny Mashouf in 1976, capitalized on its daring ways and owned the contemporary sector. Recently, however, sales and profits have slipped with the rise of fast-fashion competitors, emerging contemporary brands and department stores building up their contemporary offerings. Last year, Bebe took a tamer approach, expanding the offering with wear-to-work options and toned-down head-to-toe looks that didn’t necessarily turn heads. A bridal collection appeared and disappeared relatively quickly. Retail sales for the fiscal year ended July 6 fell 8.6 percent to $442.8 million, compared with $484.2 million for the year before, indicating that many shoppers have been turned off.

Seeking to win back the customer and recover its trendsetter reputation, Birkhold’s team has turned its attention to the going-out category and to some degree is de-emphasizing wear-to-work. “It’s about being sophisticated and sexy” and giving customers “different options on what she wants to show and what she doesn’t want to show,” Birkhold explained. “If you were to look at the core parts of our business and where it’s weighted, we are definitely seeing differences in each category.”

Inventories lean to provocative evening dresses and outfits, and the old Bebe belief that being edgy is safer than playing it safe. “The body-conscious dress category is super, super hot,” Birkhold observed.

The new campaign underscores the shift, the ceo said. “We started with unbranded teasers that created some curiosity. Already, there’s been speculation that it was Bebe.” The teasers, running since July 15 in major markets, utilize just campaign imagery and script, and incorporate a social media call-out with the #be9to5 hashtag. Bebe is working with bloggers and influencers to help spread the buzz. Branded ads go up Wednesday and will be seen in national women’s magazines. Right after Labor Day, the Los Angeles-based Bebe will open New York offices inside those of JWalk, the agency handling the campaign. Bebe will use its new location for events and as a showroom for the press.

Bebe is spending around 10 percent more on media this year, partially because it’s developed a bigger digital presence through social media, breaking from past seasons where there was greater reliance on outdoor advertising. Birkhold declined to specify the media budget.

“I have been here over six months now. It’s starting to come together,” said Birkhold, who was formerly ceo of Lacoste North America and Diesel USA. “We are reengaging with our girl in a way that makes sense to her. We continue to sell denim, weekend and the day dress category is gaining momentum. But clearly, when the Bebe girl walks through our doors, she is looking for something to go out in.”