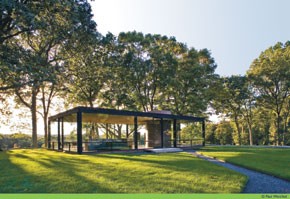 NEW CANAAN, Conn. — Seven For All Mankind is breaking new ground with its fall advertising campaign — and the attention-getter might go beyond the models and the clothes.

The premium denim label will be the first company or brand to use the late architect Philip Johnson’s iconic Glass House here as its advertising backdrop.

The fall ads will be the third major print campaign from Seven. All the campaigns have been photographed by Patrick Demarchelier.

“It’s fantastic, it’s amazing,” Demarchelier said of the Glass House during a break in shooting last month. “It’s never been shot before so it’s very rare.”

Johnson, among the 20th century’s most influential architects, died in 2005 at the age of 98. He began planning for the Glass House in 1945. That same year, he purchased five acres in New Canaan, and in 1948 broke ground on the structure. Over the years, Johnson acquired the surrounding lands and erected more structures, including painting and sculpture galleries. The 47-acre estate, which he referred to as his “50-year diary,” has been designated a National Trust Historic Site.

Although he designed many homes, New York’s AT&T building, now known as Sony Plaza, and the Fort Worth Water Garden, among many other projects, the Glass House remains one of Johnson’s most recognizable works.

Gaining access to the estate was a feat. The site opened to the public for tours in June 2007, available only April to October. Size is limited to 10 people at a time and 2008 tours have been sold out. To minimize traffic in the residential area, visitors must park at a visitors center in the village of New Canaan and take a bus to the house.

The setting is in keeping with the direction of Seven’s first print campaign last fall. The brand has relied on Demarchelier’s eye as well as unique, often-architectural settings to infuse it with a sophisticated look and what the company calls American glamour. The first print ads featured models Carolyn Murphy and Tyson Ballou and were shot at the penthouse of the Roosevelt Hotel in Hollywood and Los Angeles’ Stahl House.

Seven would not disclose how much it spends on advertising, but parent company VF Corp. has increasingly upped its advertising budget as it has acquired high-profile brands. In 2007, VF spent $362 million on advertising, representing a 12 percent increase compared with 2006.

The new campaign will feature models Doutzen Kroes and Gabriel Chytry. Demarchelier said he was looking to take advantage of the clean shape and structure of the Glass House, shooting the models in and around it while maintaining a crisp focus on both. He is known to work quickly and was eager to get back to work after a lunch break. Six set shots had been completed before lunch and Demarchelier intended to complete another six by the end of the day.

“I have to work fast,” he said. “We have six pictures more to do today and it’s getting dark out.”