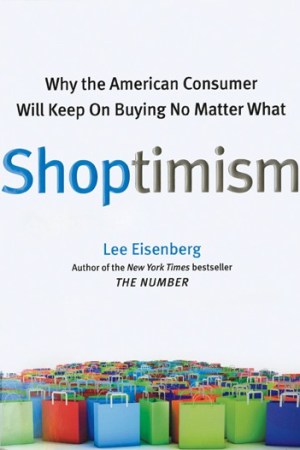 Lee Eisenberg is totally consumed — with consumer culture. The author of “Shoptimism: Why the American Consumer Will Keep on Buying No Matter What” (Free Press) aims to find out why enough is never enough in the land of the shopper. He left no cash wrap uncovered, interviewing market researchers, demographers, behavioral economists and neuroeconomists, who use brain scans to determine what sets consumers’ hearts aflutter. In the course of his research, Eisenberg got a job at Target and donned the red shirt so that he could explore the dynamics of buying and selling from the point of view of the sales associate.

But if anyone is expecting the book to be a slap on the wrist of greedy consumers, they’ll be disappointed. “I hope you agree that the book is not an anticonsumption book,” the Chicago native said. “We carried things way too far with money we didn’t have. But I also think the people who have criticized society for being overly consumptive have painted with too broad a brush.”

Like any observant husband and father, Eisenberg was aware of spending personalities before he sat down to write the book; his wife’s ambivalence over a little black dress, his daughter’s desire to have beautiful things but reluctance to shop and his son’s impulsiveness, which at times mirrors his own acquisitive modus operandi.

The former editor in chief of Esquire, Eisenberg in 1999 was hired as executive vice president of Lands’ End, overseeing advertising. He demonstrates enthusiasm about concepts that could be drier than sand in other hands, teasing fascinating nuggets of information. Who knew researchers were using neuroimaging to identify the differences between spendthrifts and tightwads?

Here, he talks about the consumer today, advertising, the future of department stores and the nature of consumption.

WWD: What did you learn from your experience of working at Target?
Lee Eisenberg: It showed me firsthand how complex it is to run a store and that what the customer might want or expect is very challenging to deliver. To Target’s credit, the [job] orientation went on for hours and hours. I was impressed by how much Target cared about a number of socially responsible issues, such as how to talk to a disabled customer. There was quite a lot of emphasis on sexual harassment and what to do in the event of a robbery. I also learned the correct way to climb a ladder.

WWD: What do you think of Target’s brand position?
L.E.: Target has had to go to market in a different way because it can’t go toe to toe with Wal-Mart on price. The Target marketing accomplishments over the last 10 years rank at the top of successful case studies. What Target did was take a lot of everyday goods and romance the experience. Even if you were buying toilet paper and toothpaste, there was a different feeling because of other romantic embellishments such as Michael Graves teapots and Isaac Mizrahi clothing. Target has much more sensual appeal than shopping at Wal-Mart. They tapped into this emotional side of us. If it’s not holding up as well it’s because paying a little more for design is not as compelling as it was three years ago. In many ways the [economic] meltdown has hurt them.

WWD: We always hear “You are what you buy.” Is there any truth to that?
L.E.: I’m not fully convinced that you are what you buy. In the last year and a half, there’s been another major change as the recession has dented the idea that it’s even worth our time to advertise ourselves through the brands we buy. Part of it is the ubiquity of designer labels, both legitimate and some counterfeit, has made the distinction of the designer label far less imposing than just a few years ago. It’s just not cool in times of economic challenge to walk around with obvious shows of ostentation. Remember when people were walking into Hermès and Tiffany and asking for plain white shopping bags? People are questioning if a lot of those products are worth it.

WWD: Are fashion blogs hurting luxury brands or helping them?
L.E.: It cuts both ways. One way it could hurt is when people post images of themselves wearing a designer label. Burberry comes to mind. People who post images of themselves in Burberry plaid may not look like the kind of customer Burberry would want its other customers to associate with the brand. All of a sudden, the brand is going to be shown in ways it can’t control due to social media. Burberry [and other luxury brands] could have a serious business issue on their hands.

WWD: What’s in store for department stores?
L.E.: Traditional retailing was always concerned about training its customers to wait for sales. What happens when we come out of these recessionary times? They will have essentially retrained everybody to never accept a stated price. The Internet will still be here and give us much broader access to an array of stores and comparative prices. The days of retailers setting prices are over. Retailers will have to deliver profits with a much more informed consumer.

WWD: Today advertising is disguised as news and entertainment. Everything has melded. Should we be concerned?
L.E.: I grew up when there was a separation between church and state, and while that was violated here and there, it was generally honored for the most part. We’re seeing the erosion of the line between editorial and advertising. Consumers understand that now. I’m not paranoid that somehow the culture is being manipulated in an evil way. I give people credit for understanding. We’ve been breathing advertising through our systems for close to a half-century. We’re sensitized to it.

WWD: I definitely remember the decline of advertising when the big agencies swallowed the small. Do consumers care that much of the creativity has gone out of advertising?
L.E.: I don’t know that consumers care much about creativity in advertising. There’s universal agreement that Madison Avenue as we used to know it in the “Mad Men” days and decade after doesn’t seem to have its hold on the marketplace as it did. I don’t think advertising is as provocative as it was during the so-called “creative revolution.” It’s been done in by its own clutter. The huge change that’s too obvious to talk about is the rise of the Internet and social media. The ability of the consumer to go off and research on her own and the transparency of pricing has rendered traditional Madison Avenue advertising more challenging than it was.

WWD: So is buying healthy for the individual and society?
L.E.: I do think buying opens up a creative channel for us so that we can express ourselves creatively through the things we buy. We need to recognize that a lot of things are emotional and are stand-ins for who we are. Things superficially help transform us. The beauty business, for example, can change our mood. People long for a connection with the things they buy. If this book makes people a little more mindful that purchases carry consequences that aren’t necessarily bankruptcy, we’ll be better off as a society. There’s been a bias inherent in people who write about consumption. It’s profound, but it’s not evil.