G-Star Raw, Diesel and more are injecting circularity into their lines for fall, while industry groups are grooming digital experiences.

G-Star RAW adds to its circular denim line for fall.

Brands are injecting circularity into visions for fall, while industry groups are grooming digital experiences and tools.

As with Helsinki Fashion Week, which took place digitally recently, the six-day NYFW event running Sept. 11 to 16 is shifted to YouTube livestream and is entirely focused on eco-friendly practices, which includes a spotlight on upcycling, student designers, vintage collectors and the full life cycle of garment production.

Billing sustainability as the “future of fashion,” the event is differentiated by its immersive online experiences spanning panel conversations, documentary features and instructional workshops.

SFW cofounders include Rick Davy, who has successfully run Fashion Week Brooklyn for more than a decade, and Bridgett Artise, owner, author and designer of Born Again Vintage who helped popularize upcycled fashion in the early Aughts with her book “Born Again Vintage.”

Davy’s nonprofit BK Style Foundation, which produces the Fashion Week Brooklyn event, focuses on building fashion entrepreneurship in low-income communities recentering fashion’s focus on Brooklyn.
​
Fashion Revolution will host one full day of programming, highlighting some of its U.S. student ambassadors and their collections, as well as international design talent from its country offices including Zimbabwe. 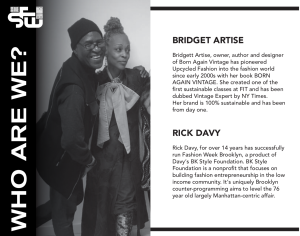 BRAND MOVES: On Tuesday, Diesel announced it joined the Better Cotton Initiative, following the launch of its “For Responsible Living” strategy this past January. Over the past year, the Better Cotton Initiative (BCI) provided training to more than 2 million farmers from 23 countries on five continents. Together, these farmers produced 22 percent of the world’s cotton.

With more brands pulling resources for sustainability initiatives, and increasing standards, a July report from MSI Integrity countered the effectiveness of some multistakeholder initiatives. Nevertheless, Diesel is in company with Gap, Nike and Levi’s among others.

Separately, in July, the brand also announced it was dipping into the anti-viral market for select denim styles for spring 2021.

Other brand sustainability moves include that of G-Star Raw which is building upon the launch of its denim designed for circularity earlier this year, leaning into its “zero waste philosophy.” For fall, the brand is adding another six denim styles to its circular denim product range that are Cradle to Cradle Certified at the gold level.

In another stride, Vivobarefoot launched its own resale and repair platform called “ReVivo.” “The shoe industry typically makes shoes out of complicated materials bonded together with petro-chemicals that will ultimately sit in landfill for a lot longer than the lives of the wearers,” said Galahad Clark, chief executive officer of Vivobarefoot, in an accompanying statement.

In one word, the company is setting eyes on “regenerative” methods to steer products from landfills. 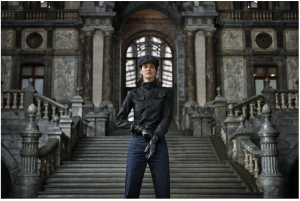 TOOLS & TECH: On Monday, the Sustainable Apparel Coalition (SAC) launched a new version of its Higg Materials Sustainability Index (Higg MSI). The updates include the ability to “calculate the environmental impacts of millions of possible material manufacturing variations,” as well as a slew of other updates according to the organization.

“With increased use and shared data, the Higg MSI will continue to evolve and become even stronger, helping to drive collective action,” said Amina Razvi, executive director of the SAC. The news follows the SAC’s board changes, which made clear that the focus on academia, the scientific community and supply chain experts will be a priority going forward in its direction.

As sustainable brands come under scrutiny for their metrics of measuring and acting on transparency, “collective action” is becoming increasingly scrutinized. Over the coming months, these groups will look to delivering on their goals, as do brands either commit or abandon sustainability efforts. 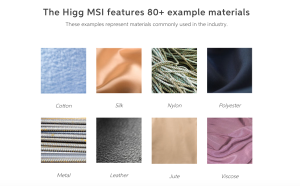 The SAC adds a host of updates to its widely used Higg Index MSI.  Courtesy