Installation at the pop-up Diet Pepsi Style Studio in New York features high heels made out of the brand's slim new cans. 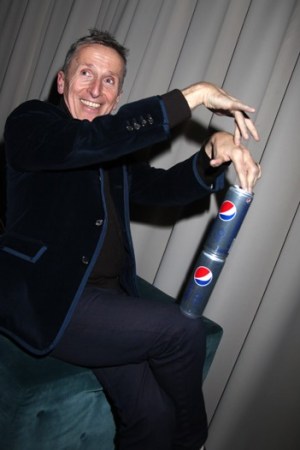 NEW YORK — Two weeks ago, Simon Doonan became the “creative ambassador at large” at Barneys New York, reducing his role at the store but not his creative bent.

He’s kind of become an ambassador for Diet Pepsi as well, now collaborating on a window installation featuring Diet Pepsi’s slim new cans, which hit the market in March. The installation gets unveiled tonight at the pop-up Diet Pepsi Style Studio, at 362 West Broadway.

“I’ve designed these huge, oversize, incredibly sexy high heels made out of this new Diet Pepsi skinny can,” said Doonan, with his usual tongue-in-cheek banter. “It’s kind of my Warhol moment. He played with Campbell Soup cans and I am playing with Diet Pepsi cans.” Doonan is also channeling Joan Crawford. “She became the legendary spokeswoman for Pepsi,” Doonan said, noting her marriage to the company’s chairman at the time, Alfred Steele.

Also in on the Pepsi project is Jonathan Adler, Doonan’s boyfriend, who designed a straw for the installation, that goes with the can. For New York Fashion Week, Diet Pepsi is sponsoring the shows of Charlotte Ronson, who created skinny T-shirts inspired by the soft drink, and Betsey Johnson.

Putting the old Pepsi can next to the new one, “almost looks like a male and female,” Doonan said, adding that the new skinny version is long and elegant, reflecting a fashion world inhabited by models six feet tall or taller and “a very attenuated fashion silhouette.…The eye has become use to seeing these super tall and skinny things.”

As far as his attenuated role at Barneys, Doonan, addressing the subject publicly for the first time, replied: “I have a high comfort level with it. Change is important. Retail needs to be dynamic. It has to evolve…I love my new role, of creative ambassador at large. A week ago, I visited every Barneys store with Guillaume Henry,” the designer at Carven. “It’s a good example of the kinds of things I will be doing. We visited San Francisco, Los Angeles, Chicago — I introduced Guillaume to all the markets, the press, and the customers,” via in-store events.

“After 25 years, I have a very strong connections with the best customers and the local press,” he continued. “It’s a fun role. Now, obviously, I will be turning up the volume on that part. That’s going to be my focus.”

Doonan was succeeded by Dennis Freedman as Barneys’ creative director. “I’m really excited to see what he does with the windows,” Doonan said. “Change is good. After 25 years, it’s only appropriate to have a new vision.”