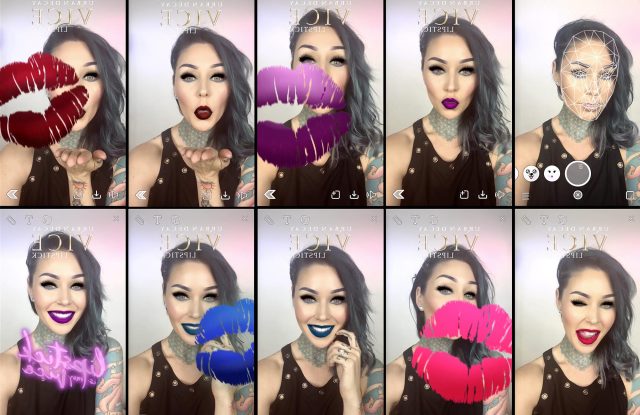 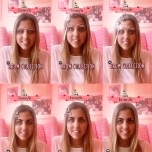 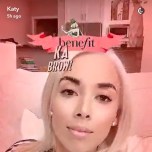 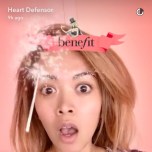 What does it take for beauty brands to win on Snapchat?

“This was really a test. Snapchat is a little bit of uncharted territory still. For our spend, we were promised a certain amount of impressions, which we know we exceeded, although we are not sure by how much yet,” said Tina Pozzi, assistant vice president of social media and content marketing at Urban Decay, noting the brand’s Twitter and Instagram followings climbed when the lens was available. “Our goal was to raise awareness and build a new audience. We really think it was a success.”

Nicole Frusci, vice president of brand and digital marketing at Benefit, said, “Everyone is incredibly happy with what it’s done for the brand as well as for the launch day. We noticed there was a huge amount of usage from consumers to beauty influencers to other partners of ours. We saw a huge spike in the cross-sharing on other channels that was greater than we expected.”

In designing its lens, Benefit aimed to squeeze in its logo and its signature pink, to demonstrate brow transformations and to feature a prettifying filter that produced flawless faces. The lens included a wand that traveled through snaps and magically enhanced brows. To cross-pollinate social media, Benefit held a contest that prodded Snapchat users to post images and videos of the lens on Instagram.

Frusci described the contest as “one of the biggest contests that we have done.” She elaborated it was intended “to transition the lens over to Instagram, drive more reach, engagement and likes, and for it to live longer by pushing it to another channel. It was incredible to see how many people were actually downloading and posting on Instagram.”

Inspired by popular lenses such as the rainbow-puking, makeup-melting and dog-tongue options, Urban Decay was keen to incorporate action into its lens. Puckering triggered the lens, which blew kisses in five shades of Vice Lipstick. “You got to experience the fun movement of the kiss and see yourself in the different shades,” explained Pozzi. “We have 100 shades of Vice Lipstick, and we wanted to have a diverse range with fun shades people would want to try on virtually.”

Both Pozzi and Frusci underscored they weren’t judging their brand’s lenses by retail sales. “We don’t look at it as a sales driver. I think it drives intent and raises awareness. They [Snapchat] don’t have conversion metrics like Facebook, and this was really an awareness driver,” said Pozzi. Along with increasing awareness, Frusci, however, received evidence that the lens boosted sales. “We heard from our stores that people came in and said they saw the lens or they were using the lens when they were shopping. That was not the goal, but it was great learning that that was happening,” she said. “What we do know is that people are using and looking at social, and it does, at times, push sales on dot-com or in-store.”

Although neither Urban Decay nor Benefit discussed the cost of the lenses or audience tallies, reports have circulated that they carry price tags of $450,000 to $750,000 and can extend to more than 100 million users. Brands are ponying up to target coveted 18- to 34-year-olds who’ve made Snapchat, similar to YouTube and Instagram, a destination for beauty. Rather than detailed tutorials or posed beauty shots, Snapchat has become a venue for brands to demystify the makeup-making process, digital influencers to give fans peeks at their daily lives and consumers to impart beauty advice and show looks.

Due to cost, Pozzi said it’s doubtful Urban Decay will regularly introduce lenses. “It’s price prohibitive,” she commented. “Most of our social is done organically. This won’t be something we do every season. It was a successful test, and I hope we can do programs in the future for large-scale launches. This worked particularly well for lipstick. It’s playful and colorful.”

Urban Decay and Benefit unveiled their lenses to Snapchat users not yet inundated by branded overlays, especially from beauty brands, but sponsored involvement is quickly escalating. “We are at a very precious time, where Snapchat isn’t overwhelmed by advertisers, and that is what is really engaging users. Eventually, it will be like Facebook and Instagram, where they will figure out a way to monetize more advertising, and it may change as it becomes oversaturated,” said Pozzi. Frusci offered, “While it might be getting crowded, I still don’t think it has hurt the engagement yet. That’s something to watch.”