Rounding up the Web’s most stylish visionaries:The lowdown on 12 bookmark-worthy blogs andsites that put trend analysis at your fingertips. 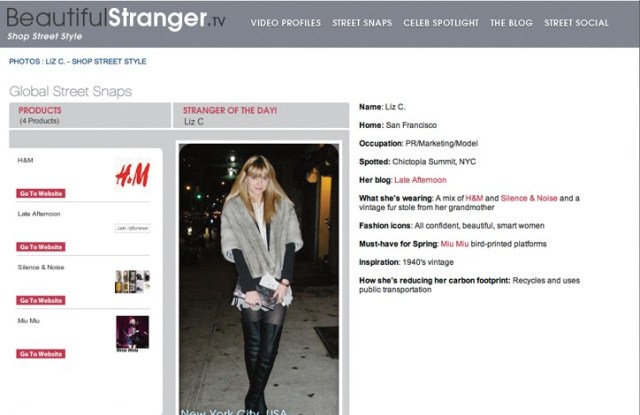 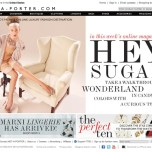 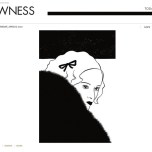 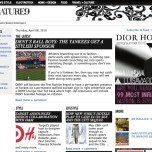 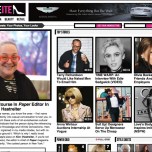 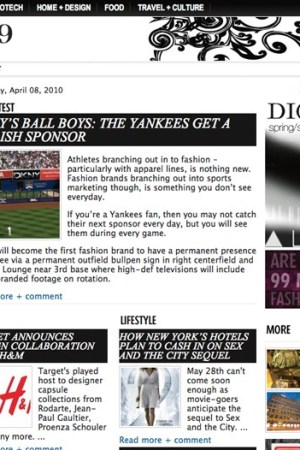 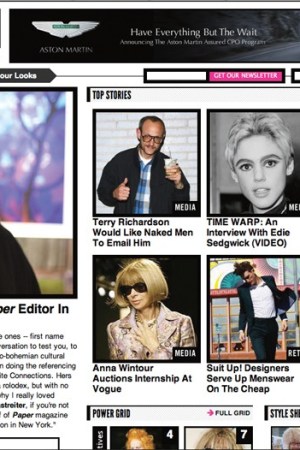 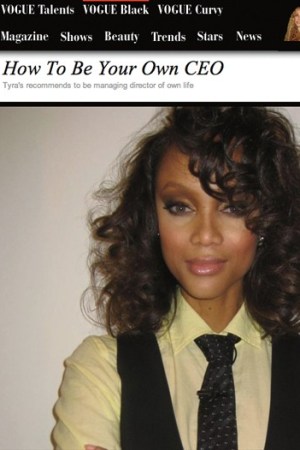 For those whose jobs depend on staying on the cutting edge of the style loop (and that would be virtually everyone in the beauty business), trend analysis has become much less costly and infinitely easier with the explosion of the blogosphere and social networking. Still, drilling down to the best the Internet has to offer could easily become a full-time job. These 12 multidimensional, must-bookmark sites—a mix of major players and on-a-shoestring indies—represent the best of the bunch, with a fresh vision on the industry’s key influencers.

Roughly three years postlaunch, this gal-on-the-street intel site has added commerce. According to partners Abby Wallach and Melissa Fedor, monetizing was always a goal, but it took major recon before they struck an alliance with Media/And, which specializes in attaching dollar signs to online content, particularly videos. Though Beautiful Stranger has always provided where-to-buy info via links, by teaming with Media/ And, which provides back-end technology and access to more than 3,000 Internet affiliates, the duo will now receive a cut of any item that gets bought by its users. Now comes the hard part: going back into the 100-plus video profiles and scores of static “Street Snaps” and tweaking the product mentions so they’re shoppable. Sometimes they have to dig deep, as with the Gucci Westman video, in which the star makeup artist has no idea what shoes she’s wearing. Turns out they’re Spring Court tennies. “Those took about an hour to find,” says Fedor.

Because I’m Addicted
BecauseImAddicted.net
The night job of Los Angeles–based fashion savant Geri Hirsch (by day, she’s a marketing exec for Good, an innovative philanthropy and green portal), Addicted offers a bird’s-eye peek into the brain of a style-obsessed twentysomething. Yes, there are more than a few pictures of her in pricy skinny jeans, but here’s what surprises: the sophistication of Hirsch’s edit, which is culled from all the major fashion capitals and reflects a deep knowledge of the international scene. The mix is eclectic, featuring everything from killer tortoiseshell sunglasses and a recipe for fried goat cheese salad to news that she’s been invited to cover Russian Fashion Week. And certainly no one could accuse Hirsch of being verbose. Attached to photos of Kate Moss from a 2006 French Vogue sitting is a single word of copy: “Epic.”

Coûte Que Coûte
CouteQueCoute.blogspot.com
Digital eye candy for the timedeprived, this site sifts through stacks of edgy international fashion magazines so you don’t have to. By extracting directional editorials from the likes of Dazed & Confused, British Vogue and the Russian edition of Citizen K, and presenting them in a lush, almost life-size format, Coûte Que Coûte provides a way to do a deep fashion dive with speed and efficiency. The handiwork of a Germany-based blogger and creative whiz named Roberto Poropat, it also serves up look books and ad campaigns from an array of buzzy brands. Trust that its modest tag line—“insignificant random news on fashion, art & design and pop culture”— underplays its value.

Haul Videos
YouTube.com
Not an especially glamorous moniker, a “haul” is a proud video display of all the goodies bought by the poster at the local mall. To the uninitiated, it can come as quite a shock that there are thousands of these documented shopping sprees on YouTube. Start by checking out Blair Fowler, aka JuicyStar, who had racked up more than 16 million channel views as of early April, nabbed an appearance on Good Morning America and landed a story in Seventeen magazine. But before plunging in, be forewarned: This is the cyber version of the Wild West. So if, as a marketer, you’re initially thrilled to see that there’s a haul posted of the brand to which you’re professionally attached, know that the haulers— teens, for the most part—can and do say whatever they want. Sure, they’re bound to give a thumbs-up; after all, they’ve mostly plunked down their own hard-earned cash for this stuff. But let’s just say that not every kid in the candy store is a dream brand ambassador.

Net-A-Porter
Net-A-Porter.Com
Recently purchased by Compagnie Financière Richemont SA for a whopping $530 million, this megasite isn’t an indie upstart. But then again, it couldn’t produce its lush online magazine if it were. Updated weekly, it’s as close to a bona fide glossy as it gets. Actually, because it incorporates some key Web bells and whistles, it even ups the traditional magazine ante a bit. For instance, in the 23-page “Red Carpet Glamour” issue, the “cover” boasts blinding paparazzi camera flashes. Of course, all that pizzazz has a downside: pages that load oh so slowly. Still, for the patient, there’s a wealth of data to be gleaned on buzzy people, places and things.

Nowness
Nowness.com
Although it scrapped eLuxury.com to make way for the content-only Nowness, make no mistake: LVMH is still very much playing in the highend pocket of cyberspace. After all, what could be more luxe than a site devoted to indulging the outré leanings of contributors such as Patti Smith, Lucien Freud and Rodarte? Curated by Another Magazine’s Jefferson Hack, Nowness features a broad array of stunning imagery. Each day, a new tidbit from fashion, art, culture or travel is posted, often exclusively. Case in point: The can’t-take-your-eyes-off-it blackand- white film Flying Hair, in which model Lily Donaldson flings her Sam McKnight–styled locks around in slo-mo. It runs for two minutes, but the visually inclined will wish that it lasted forever.

Polyvore
Polyvore.com
DIY scrapbooking with an ultraslick spin, Polyvore rips fashion styling out of the hands of industry insiders and tosses it over to the people who actually buy the clothes. By allowing its members to create their own “sets” (aka head-to-toe looks) via its virtual styling tool, the hope is that they’ll click through to the dress, bag, shoes, etc., and plunk down the plastic. None of the sales are direct, but are instead funneled to aggregates such as Net-a-porter or individual brand Web sites. The staggering number of monthly page views (140 million, per the company) means there’s a high likelihood that at least a little Balenciaga or BCBG Max Azria is making it into closets across the country.

Signature 9
Signature9.com
Slightly off the grid but seriously dialed in, this site is a veritable font of “lifestyle” recon. Per publisher and founding editor YM Ousley, the 18-monthold site aims to provide, through research and commentary, a “unique perspective on the products, places and things that define signature style.” That translates into a running feature on indie brands and comprehensive rankings of fashion blogs and social style sites. The m.o. here is to keep tabs on industry influencers. Another way this site sets itself apart: Men’s style gets plenty of love, too.

Styleite
Styleite.com
With its signature “Power Grids,” Styleite—one of four sites under Dan Abrams’ just-shy-of-a-yearold Mediaite LLC umbrella—is aiming for the inside track of an extremely insular business. Not an easy task, which would explain the slight stumbling out of the starting gate. (To wit, hair god Serge Normant is inexplicably lumped into the “fashion stylist” grid alongside sittings czarinas Rachel Zoe and Katie Grand.) Still, it’s a lively mash-up of trade and consumer. For non–industry types, the site offers interactive “Style Sheets” that allow readers to upload images of themselves decked out to the nines. They can then tag specific items they’re wearing, and presto—instant status conferred.

Style Sample Magazine
StyleSampleMag.com
A free digital magazine focused on and written by fashion bloggers, Style Sample just released its sixth issue. While the base site is more of a boon for bloggers (it provides plenty of how-to info and technology tips), it also allows readers to click through to the issues. And that’s where an overload of creativity lives. Although it’s all a bit meta for anyone who isn’t personally in the blogging trenches, it’s an excellent venue for scouting talent for possible corporate sponsorship. Beyond that, it’s just a fascinating place to hang out for anyone whose job description includes style.

The Glamourai
TheGlamourai.com
Cleverly written by busy-bee stylist/jewelry designer/blogger Kelly Framel, this site unveils a visual feast of the author’s “costumes” (she recently segued from vintage nut to pretty punk) alongside lots of images of just about anything that strikes her fancy, be it a pile of doll heads at a Texas flea market or Chanel’s Nouvelle Vague nail lacquer. Her running commentary is brief, albeit sharp, and Framel herself is hard to peel your eyes from. A genuine dyed-in-the-wool stylista.

Vogue Italia
Vogue.it
With a rep for being the edgiest show pony in Vogue’s global stable, Italian Vogue is every bit as directional and boundary pushing with its English-speaking Web site. Most notable is the content-rich “Black” subsection, which cements the clout the magazine received for its seminal Steven Meisel–helmed “Black” issue from July 2008, posted here in full alongside “Look of the Day,” “The Black Blog” and “New Faces.” Also of interest: the service- and tips-centric “Curvy” section, and “Talents,” which showcases both on-therise designers and Franca Sozzani’s irresistibly straightshooting “Editor’s Blog.”