Some Ads Sing Louder Than the Brands

A fashion brand may capture a consumer's eye with a clever ad, but how much farther will it get? 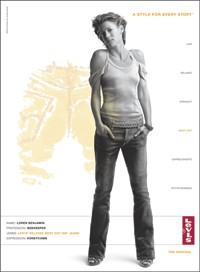 NEW YORK — A fashion brand may capture a consumer’s eye with a clever ad, but how much farther will it get?

The gap between an ad’s allure and consumers’ clamor for the brand being trumpeted can be considerable, as evidenced in marketing consultant Brand Key’s first-time Fashion Brand Engagement Index.

Six of the 10 fashion brands ranked by 7,500 men and women as having the most engaging advertising — ads they saw as conveying what they most value in a particular brand — failed to register among the 10 brands bearing the names and symbols the group most wanted to wear.

More broadly, 17 of the 25 fashion brands with ads the overall group found most engaging failed to register as ones with the labels and logos respondents considered important to wear now, compared with three years ago. “If you ask companies about who they are, the chances are they’ll talk about their advertising instead of their brand values,” Brand Keys president Robert Passikoff said, speaking of the difference between the image of a brand and its substance.

The bottom line, Passikoff concluded: “Sometimes ads are more engaging than the brand itself.”

“Levi’s is a good example,” Passikoff said. “It shows up near the top of the brand engagement index and only one place in the fashion index, versus Ralph Lauren, which shows up everywhere.”

The fifth annual Brand Keys Fashion Index classified the 7,500 consumers (who also participated in the engagement index) in six categories to assess their interest in wearing brand names and symbols: men and women, men, women, 21- to 34-year-olds, 35- to 44-year-olds and 45- to 59-year-olds. Levi’s registered as a top 10 favorite to wear among the men’s cohort alone, placing eighth and drawing an 11 percent share, or 412 of the 3,750 men surveyed. Ralph Lauren was a top 10 pick in all six categories of people polled and it ranked first among the 3,750 women who participated.

Told of the disparity between the group’s strong response to Levi’s ads and weaker desire to wear Levi’s apparel, Amy Jasmer, director of Levi’s brand presence, said in an interview, “Our experience is the ‘Style for Every Story’ ads are reinforcing a desire to wear the brand.”

Since that campaign started in May 2004, with print ads photographed by Richard Avedon, Jasmer said the way women feel about the brand, based on the ads, has been improving. For example, 27 percent more women last year than in 2004 said the Style campaign made them want to look for the Levi’s brand on their next shopping trip, Jasmer stated. She cited data from market researcher Ipsos, which last fall conducted a consumer study commissioned by Levi’s. Despite that inclination, however, Jasmer further noted the brand’s “purchase measures were flat, specifically brand share, in a declining market” in 2005, compared with 2004, based on NPD Group data.

A kind of reverse disconnect occurs when a brand’s ads fail to resonate with consumers, yet consumers have a strong desire to wear the marketer’s apparel. Giorgio Armani, Nike, Adidas and Donna Karan were brands that provoked a strong response from people who like to wear them, yet their response to the brands’ advertising was notably less favorable. Armani, for instance, rated as the third most important name to wear, but as having the seventh most engaging ads. Nike’s apparel labels and logos ranked as fourth favorite to wear, while its ads were considered only 12th most engaging. For Adidas, the gap between those who valued wearing its monikers and those who were engaged by its ads manifested in rankings of sixth and 13th place, respectively; for Donna Karan it was a still wider divide of eighth (to wear) versus 18th (for engagement).

“The old paradigm of [traditional] advertising triggering sales is changing,” said Peter Levine, director of visual strategies at brand-image creation agency desgrippes gobé. With word of mouth and other kinds of viral communication playing a bigger part in stimulating business, Levine said, traditional advertising is serving a different purpose. “It is one part of a conversation,” he contended. “It is just one component of brand awareness.”

The Brand Keys Fashion Index and Fashion Brand Engagement Index are based on people’s evaluation of 46 names they cited, without prompting, as those they considered important to wear now, compared with three years ago, in research conducted during February and March. Fashion was one of 35 business sectors, including airlines, banks, retailers and overnight delivery services, for which Brand Keys built brand engagement indexes.

The advertising mounted by 25 of the 46 brands evaluated for the fashion index was deemed engaging enough by consumers for Brand Keys to include them in the engagement index. The ads of only one of the 25, Gap, fell below the engagement index’s baseline of 100, at 96.

Just four of those 25 fashion names whose ads were found most engaging could also be found among those deemed most important to wear: Ralph Lauren, rating first in the engagement index and second in the fashion index; Versace, placing fourth and fifth, respectively; Brooks Bros., eighth and seventh, and Tommy Hilfiger, 11th and ninth.

When such brands command high ratings for their apparel and their ads, Passikoff said, “It reflects marketing synergy. Whatever the brand has engendered as its meaning is being reinforced by the advertising.”

The 10 monikers rated by the overall group of 3,750 men and 3,750 women as most important to wear now were capped by the names of people’s favorite sports teams. Ralph Lauren ranked second, followed by Giorgio Armani, Nike, Versace, Adidas, Brooks Bros., Donna Karan, Tommy Hilfiger and Kate Spade. Lauren, Adidas, Brooks Bros. and Hilfiger are new to the list of combined men’s and women’s favorites to wear this year, compared with 2005, while J. Crew, Chanel, L.L. Bean and Calvin Klein did not appear on this year’s combined list, as they did a year ago.

Five of women’s 10 favorite brands to wear now did not appear in the 2005 fashion index —­­­ Versace, Chanel, Donna Karan, Kate Spade and Bebe — while one on last year’s list, J. Crew, dropped off.

About one-third of the women polled, 32 percent, or 1,200, favored wearing apparel bearing the Ralph Lauren name and symbols over all others in fashion. In four of the remaining five groups designated by gender and age, the Lauren name and images were rated as the second most important to wear, behind those of people’s favorite sports teams, and in the fifth, among 2,500 35- to 44-year-olds, they placed third, following the group’s favorite sports teams and Nike.

The only other brand that proved a top 10 favorite to wear among all five demographics was Giorgio Armani, which ranked third among women; 26 percent, or 975, chose the brand. Nike came up as a top 10 choice in four of the five cohorts, absent only among the labels preferred by the 2,500 21- to 34-year-olds.

While Chanel rated as fifth favorite to wear by women, it scored in the top 10 in just one age bracket, 45-59. “The age issue is a priority — to reach the young and to be forever young,” acknowledged Lyle Saunders, Chanel’s vice president of creative services. The recent signing of 21-year-old actress Keira Knightley to appear in fragrance ads for Coco Mademoiselle is one of Chanel’s plays for a young customer, said Saunders, who noted a woman’s experience of Chanel fashion often is preceded by the purchase of “an entry-level item” such as a fragrance, nail enamel or lipstick.

More than two-thirds, or 69 percent of those surveyed by Brand Keys, said it was less important to wear a given fashion brand name or logo now, compared with three years ago, up from 67 percent in 2005 and 64 percent in 2004. This share is likely to climb a few more points before it hits a ceiling somewhere below the 80 percent mark, Passikoff projected.

The diminishing importance placed on wearing fashion names and symbols might be further reflected in the decrease in the number of brands cited as significant in that regard by participants in the Brand Keys Fashion Index — 46, off about one-fifth from 57 last year and down 10 percent from 51 in 2004.

In two of the three age groups, more than 70 percent already find less significance in wearing various brand names and marks: 72 percent of 21- to 34-year-olds and 78 percent of 45- to 59-year-olds. Among those ages 35 through 44 years old, 69 percent are finding it means less.

“It is likely that the 35- to 44-year-olds are the tail end of the group for who [wearing brands] means anything,” Passikoff said. “And as they age, they, too, will taper off in their bond to brands.”