At the New York fall collections, the makeup was very polished, hair anything but. 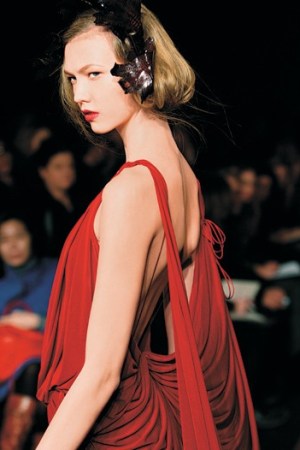 At the New York fall collections, the makeup was very polished, hair anything but. The result? A dramatic dichotomy that made for one of the most exciting beauty seasons in recent memory.

Minimalism is usually the name
of the game when it comes to beauty at New York Fashion Week. But during the fall 2008 collections, held in February, femininity met sophistication in the form of bold makeup and statement-making hairstyles. Viva la beauty

CURLS
Curls are a staple on New York runways. Particularly exciting this year was their diversity, from the Twenties-inspired marcelled waves at Baby Phat to the pinned-up loops at Vera Wang and the riotous ringlets created by Kevin Ryan at Milly, who said his muse was “a flapper the morning after.”

THE TWIST
From Eugene Souleiman’s elegant wraps at Monique Lhuillier to the tousled twists at Philosophy and Thakoon, this ladylike style was given an injection of modern quirkiness for fall.

PONYTAILS
Guido called the look he created at Marc by Marc Jacobs “just a ponytail,” but, enlivened with texture, it was much more. Ditto the styles at Rachel Roy, Rag and Bone and Luca Luca, where new twists freshened up a classic look.

THE NEW NATURAL
While minimalist makeup is always a favorite of New York designers, this season natural no longer meant nothing. Bright pink lips adorned bare faces at Marc by Marc Jacobs, rosy cheeks at Tommy Hilfiger, lush lashes at DKNY and pure polish at Ralph Lauren and Michael Kors.

MUTED TEXTURES AND TONES
Makeup artist Lucia Pieroni likened the look she created at Vera Wang to a watercolor painting. She was in good company—powdery textures and soft colors were seen on myriad runways, from the quiet elegance of Isaac Mizrahi to the beautifully soft shades at Thakoon and Anna Sui.

RED-BROWN LIPS
Statement-making lips were a key message for fall, with a deep red brown the color of choice. Some were more on the cherry end of the spectrum, others on the chocolate, but the appeal was equal—and undeniable.