Style and Trend: Year in Review

Smart = Fashion + Function. What defines a season are the trends and innovations in fashion that linger... 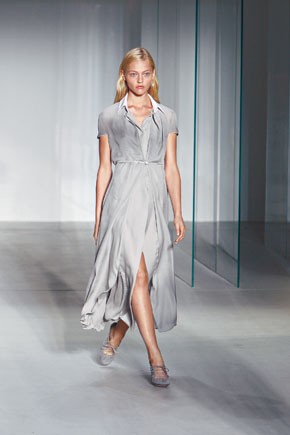 What defines a season are the trends and innovations in fashion that linger. The year 2006 boasted a range of candidates from longer tunics and skinny jeans to shirt dresses. Layering, fitted jackets and deliberately exaggerated silhouettes also emerged on the fashion landscape. Each garment, accessory or trend made an impact on the fashion pages of 2006. But now with the calendar down to just one page, the pundits ponder whether one quintessential fashion defined the year.

“I think if there were one collective theme to 2006, it would be a return of classic garments updated in a fresh way in terms of fabrics and colors,” says Jessica Paruch, a product trend analyst with Cotton Incorporated. “They feel new, but offer a nod to tradition.”

“2006 saw a return of dramatic, chunky proportions,” details Robyn Rhodes, a jewelry designer. “Think bold, random and asymmetrical. It was about breaking the rules, but not to please anyone but yourself.”

The past year certainly did seem to be about dressing to please one’s self and women had plenty to choose from to make them happy. “I love pants and build my outfits around them,” says Erin Condren, a stationery designer whose creations were recently featured on Ellen, the popular television talk show. “This year, there were so many fun pant styles from gaucho to skinny leg to trouser; I adored all of the different silhouettes!”

There were also an abundance of shapes and colors to choose from in recent months, and it appears that that the more choices women have, the more likely they are to hit the stores. When asked how often they shop for apparel, female respondents told the Cotton Incorporated Lifestyle Monitor™ they shopped an average of 2.4 times per month in the third quarter of 2006, the highest this number has been in the twelve years that the Monitor has been following consumer behaviors.

Female respondents to the survey cited that they spent an average of 106.4 minutes shopping for apparel in a given month during the third quarter of this year, up slightly from 102.8 minutes that they spent in the same period a year ago. However, women spent nearly the exact same amount of time on an average shopping trip in both periods; 44.31 minutes in the third quarter of 2005 and 44.34 minutes in the same period in 2006.

With an increase in choices, there is a corresponding uptake in women’s confidence levels. “What’s exciting to see is how confident women are getting, mixing all sides of their closets to extend the wearability of their favorite finds, while expressing their personalities,” considers Betsy Thompson, director of public relations for Talbots, the national retailer. “Women seem more comfortable than ever picking trends that work for them based on their figures and lifestyles, as we have seen them do with layering.”

“For 2006 the layering trend was it for me,” affirms Kristen Aronsson, design director, Kata Eyewear, a stylish line of glasses. “I loved how it manifested itself in Fifties-style cropped jackets over light flowing tunics with skinny grey jeans. I love the retro, feminine silhouette this creates, but I like to add ankle boots for a modern twist.”

Kate Ceipluch, a buyer for Shopbop, a Web site offering today’s most stylish brands, was also a huge fan of the grey skinny jean. “It was such a fresh look,” she enthuses.

Denim is one item that any woman can count on to constantly reinvent itself. Women are well practiced at identifying new styles and silhouettes. When asked by the Monitor if their last denim purchase was a replacement or an addition to their wardrobes, nearly two out of three female respondents indicated it was an addition.

“Women certainly love denim and with all of the new treatments and finishes, they can find great functionality along with that fashionability that women want in their jeans,” Paruch, the trend analyst, cites. “And new finishes are being introduced every day.”

In addition to being fashionsavvy, women are well-versed on the prevalence of performance finishes on today’s clothing. When asked if they were aware of cotton clothing that had specific performance attributes, the majority of female respondents stated in the affirmative for easy care properties (77%), addition of stretch (74%), wrinkle resistance (68%), an expandable waist (67%), and stain resistance (55%). A significant portion of women also stated that they purchased cotton clothing with the following attributes: stretch (79%), easy care properties (78%), wrinkle resistance (71%) and an expandable waist (61%). “The message is certainly getting out there,” Paruch completes.

Practicality certainly had its place in modern dressing. One of the season’s most important garments boasted a distinct functional advantage, according to Alle Fister, founder of Bollare, a West Coast-based public relations firm. “I definitely pick a long shirt; there’s nothing better than that to cover your behind when you sit down in your low-rise jeans!”

As 2006 comes to a close, one of the most enduring trends was the skinny pant paired with a contrasting, top-heavy silhouette or long, more fitted layers. Layering was key, but in a more refined way than in season’s past. And the grey jean was a runaway runway hit. But the clothes that made the most impact were those that were smart in all senses of the word – stylish looks marrying functionality with fashionability. And, as we look ahead to 2007, fashion experts agree that this blend of practicality and pizz-azz will play out through the spring and fall seasons, making for a happy New Year, indeed.

This story is one in a series of articles based on findings from Cotton Incorporated’s Lifestyle Monitor™ tracking research. Appearing Thursdays in these pages, each story will focus on a specific topic as it relates to the American consumer and her attitudes and behavior regarding clothing, appearance, fashion, fiber selection and many other timely, relevant subjects.