Mother and daughter will star in a digital Mother’s Day campaign for the retailer. 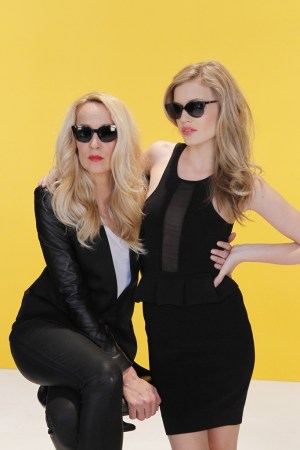 HOLLYWOOD — It was a family affair Tuesday on the set of the latest Sunglass Hut shoot, where Jerry Hall and her youngest daughter, Georgia May Jagger, had just wrapped a Mother’s Day campaign. The pair shot an H&M holiday ad together last year, but haven’t worked together since.

While Jagger’s career has recently started to take off — she also serves as the face for Hudson Jeans and Madonna’s Material Girl brand and will appear in Just Cavalli fragrance ads in February — Hall, 56, knows the in’s and out’s of model-dom, which she has imparted to her 20-year-old daughter.

“Mom’s such a good model I always get nervous about shooting with her,” said Jagger, side by side with Hall on a leather love seat at Milk Studios.

“Oh, she’s already so good,” said Hall. “The best modeling advice I’ve given her is to be on time and be nice to everyone. I’ve also gotten [my children] to watch a lot of old movies so they’d know about Hollywood glamour.”

Jagger, who signed on as the face of the sunglasses retailer in June, has already appeared in two campaigns with her boyfriend, musician and model Josh McLellan. The holiday campaign is currently running in the print and digital space, and a Valentine’s Day campaign due out in early February is exclusively for the Web and also features a video with music by McClellan’s band, Turbogeist. “It’s quite fun to throw in people I know,” said Jagger of the shoots.

“It’s funny because you sometimes get nervous being in front of the camera but it’s actually quite nerve-wracking to take photos because you have to make sure that they’re good,” Jagger said.

Irwin, who has shot Jagger for Hudson and Russian Vogue and agreed to take her on as a photography apprentice, agreed. “She was great, a natural. I told her that whenever she has spare time she can work with me,” he said.

For the Mother’s Day campaign, which will appear exclusively in the digital space, Irwin captured the mother and daughter hugging and vamping in cat-eye sunglasses from Luxottica brands Vogue Eyewear and Tiffany & Co. Shot against a simple yellow backdrop with the models clad in black, the main theme was “energy and emotion,” according to Fabio D’Angelantonio, Luxottica’s chief marketing officer, who also oversees the company’s retail luxury and sunglass business.

“What we try to celebrate in Mother’s Day is love, respect, recognition for mothers, how they want to be women, and their passion for fashion,” he said. “Jerry and Georgia have a beautiful mother-daughter relationship, and that is the angle we put in the campaign. You can see how much Georgia’s style comes from mother and how Jerry’s style is continuing in her daughter.”

As for the retailer’s digital initiatives, D’Angelantonio said, “You can’t be a brand if you don’t want to do digital as part of your job. It’s 150 percent relevant and more and more how you get to the core of a customer relationship.”

While the company will continue its focus on bigger flagships in large cities next year, it also plans diversified gains through airports, department stores, malls and the high street. In 2013, Luxottica projects it will cross the $1 billion milestone in retail sales. “This year we were close,” said D’Angelantonio.

With the shoot over about an hour ahead of schedule, Hall and Jagger gathered their bags and prepared to catch a flight back to London, but not before snagging some shades and the outfits they posed in (Hall wore the Helmut Lang leather leggings and knit jacket out the door while Jagger changed out of the French Connection dress and back into her own Balenciaga and Vivienne Westwood clothes).

“We had a fun time; we got to hug a lot,” said Hall in her Texas drawl. “Georgia’s so busy so it was nice to spend so much time together. And all the kids are coming home for Christmas.”