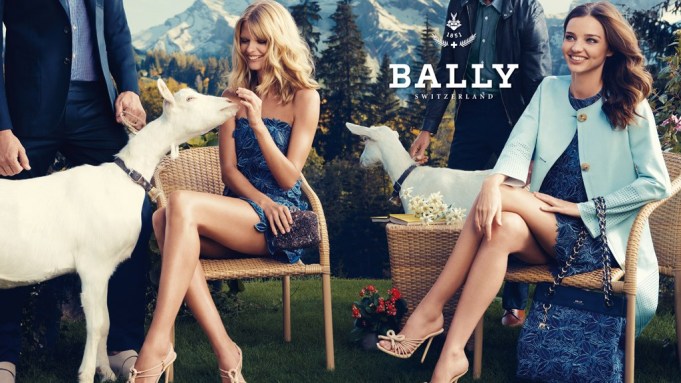 SWISS BLISS: The hills are alive for Bally, which decamped to Gstaad for its spring ad campaign shot by Norman Jean Roy under the creative direction of Ronnie Cooke Newhouse and Stephen Wolstenholme. Miranda Kerr and Julia Stegner are pictured feeding goats, gazing through binoculars at snow-capped mountains, and whooping it up al fresco with fellow models Cedric Bihr and Robert Konjic.

“This season, we wanted to move outside the studio and embrace the roots of the brand. That’s important to the Bally customer and important to us,” said Michael Herz, Bally’s co-creative director. “We’d already introduced the goat as an emblem for the brand, and having them there felt right. We wanted the images to feel charming and make you smile.”

Herz and Graeme Fidler are co-creative directors, and joined the company in March 2010.

The color campaign was shot in the early October sunshine at the Gstaad Palace Hotel, and showcases the men’s and women’s ready-to-wear and accessories. It will break in the January issue of L’Uomo Vogue, and then in the February issues of titles including British Vogue, American Vogue, W, Vanity Fair and in the British and American editions of GQ.