Kicking off their partnership with a new watch, Tag Heuer and Porsche plan to hold events together, including motorsports competitions.

PARIS — Tag Heuer and Porsche have drawn up an expansive partnership stretching from products to motorsports competitions, combining brand firepower at a critical moment for consumer industries.

“We share an attitude,” said Frédéric Arnault, chief executive officer of Tag Heuer. “Like Porsche, we are disruptors at heart, always in pursuit of high performance.”

The tie-up of the two well-established brands comes at a time when the coronavirus crisis has buffeted consumer-facing companies, speeding up the race to adapt to a digital landscape and find new ways to connect with the public.

“We both strive to create some unique, magic moments for our communities,” noted Detlev von Platen, executive board member for sales and marketing at Porsche. The executives spoke with WWD through a Zoom call. “We now look forward to doing it together,” continued von Platen.

Combining forces raises the stakes for brands jockeying for positions in a crowded field — the internet has multiplied options and scattered people’s attention.

“If a company wants to stay very successful in the future, in this very fast-changing world with a lot of communication everywhere — the markets are different, you need strong brands,” added the car industry executive. Branding is becoming increasingly important, he continued.

The companies have been geared toward motorsports over the years, and working together is a way to enhance the appeal of both, he said.

“We are two companies not just delivering some products — we are delivering experiences, moments,” he said.

The pair have also been involved in virtual racing with the Porsche Tag Heuer Esports Supercup. Deepening these ties, Tag Heuer will now also be a global partner for Porsche’s classic events and rallies.

Also active in golf and tennis, the companies will join forces on this front as well, with Tag Heuer becoming the official timing, watch and chronograph partner for the Porsche Tennis Grand Prix tournament in Stuttgart, and joining the carmaker in sponsoring the Porsche European Open golf tournament. 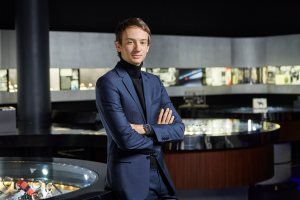 The formalized partnership marks an important move on the part of Arnault, who took over the reins of the LVMH Moët Hennessy Louis Vuitton-owned label last year, becoming the youngest of Bernard Arnault’s children to take charge of a brand in the group.

Tracing the origins of the plans unveiled Thursday, Frédéric Arnault noted that when he joined Tag Heuer and began reviewing brand partnerships, it quickly became obvious that the watchmaker should tie up with Porsche.

“For many reasons, the link to history…and so many elements and values in common,” he said, recalling how he first reached out to von Platen.

“It started with a phone call, both of us about two years ago, talking about both brands, the connections we had and what we loved about both brands and how we would envision partnerships. And from the start we both said we want to work together — not in just any way, but in a real, strong, long-term partnership,” he explained.

“And you came by car from Stuttgart to La Chaux-de-Fonds,” he said, turning to the executive, who sat across the table. 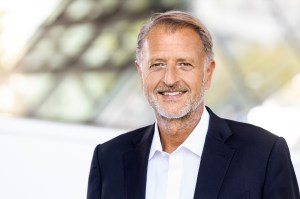 Detlev von Platen is member of the executive board for sales and marketing at Porsche.  Courtesy of Tag Heuer / Alexander Fischer

Plans to reveal the partnership in 2020 were scuppered by the coronavirus crisis, but presenting it this year allowed them to launch it with a watch: the Tag Heuer Carrera Porsche Chronograph. The automatic watch, which starts at $5,850, has an asphalt dial — a rough, gray surface — and features three chronographs. “Porsche” is inscribed on the bezel.

Marking the first step of the partnership, the timepiece pays tribute to the Carrera watch launched by the Swiss watchmaker in 1963 by Jack Heuer, in reference to the Panamericana car race in Mexico.

“We took the base of the Carrera watch and added some subtle elegance,” said Arnault, ticking off the main attributes of the piece. Independently, Porsche has had a Carrera car model over the years.

“It took some time, we had to imagine it without compromising on the quality of the Tag Heuer movement,” added the executive, pointing to references to the stitches on Porsche car seats that feature on the strap.

Other products are in the works, and the companies plan to pool technology to draw up both mechanical and connected products, Arnault continued.

The executive started out in connected technologies at Tag Heuer, and later oversaw the launch of a new website for the brand, as well as the development of a new generation of sports-oriented connected watches — including golf watches.

The companies are drawing up ideas for future watches, with an eye to technological innovation, and taking inspiration from the car industry, noted Arnault, citing materials, engines and the movements as key potential focus areas.

The label draws on LVMH’s innovation center, which is based in La-Chaux-de-Fonds and serves the group’s watch and jewelry labels, which also include Hublot, Zenith, Chaumet and Fred.

Arnault and von Platen introduced the partnership through a video presentation Thursday, timed to reach audiences spanning the globe.

“This gives a lot of credibility without taking the identity of the each or the other brand,” said von Platen, speaking of the product side of the partnership.

“It gives you confidence about a product,” he added.

Teams from the companies are working together on a local level, they said.

“There is already strong links and partnerships that are built at a local level,” Arnault said.

“The COVID-19 is still very much present and we don’t know for how long — and the main difference for distribution is people are not traveling,” he said.

The label has made significant gains in digital channels, he said.

“We are seeing very strong trends in terms of the e-commerce, even in watches, high-end watches, high-priced watches and this is a topic we have been investing in for years, and is accelerating by a lot,” the executive said.

In China, the brands have plans to launch events in the coming months, including in person, over the first quarter, similar to others held worldwide, but also tailored to local clientele. China has been Porsche’s leading market since 2015, noted von Platen.

“We’ll bring some of our top customers for some VIP experiences with Porsche — and the great Porsche experience that they have there — and we’ll have events together with Porsche customers and Tag Heuer customers — we have a whole road map of activations,” Arnault said.

Events are also planned for the U.S., which has been a priority market for Tag Heuer under Arnault’s direction — he rolled out the brand’s new internet platform there in March last year, and chose New York City for the launch of the new generation of connected watches around the same time — just before the first wave of coronavirus lockdowns.

“Both brands are very strong in the U.S.,” said Arnault, noting the watch would be distributed through exclusive channels. The label has reduced distribution channels in the country in order to emphasize higher-quality retailers and is opening three new Tag Heuer stores there this year.

Actor and race car driver Patrick Dempsey, who has been a brand ambassador for both Porsche and Tag Heuer, joined in on the launch from New Jersey.

“All my friends around the world who are watch collectors and sports enthusiasts and certainly race car drivers, let’s get together and have some fun this year,” Dempsey said.

“It’s about relations, it’s about fit, it’s about culture, it’s about values,” von Platen told WWD. During the online launch presentation, he noted that people were surprised by the news because the brands had been known to work together for the past 50 years, citing their involvement with races in Le Mans, France, the connection with Steve McQueen and the Tag — Porsche formula 1 engine in the Eighties.

Asked what long-term meant, in terms of this partnership, Arnault was quick to answer.