A new social networking service has emerged that is rapidly becoming the next must-use tool to communicate with tech-savvy Chinese consumers. 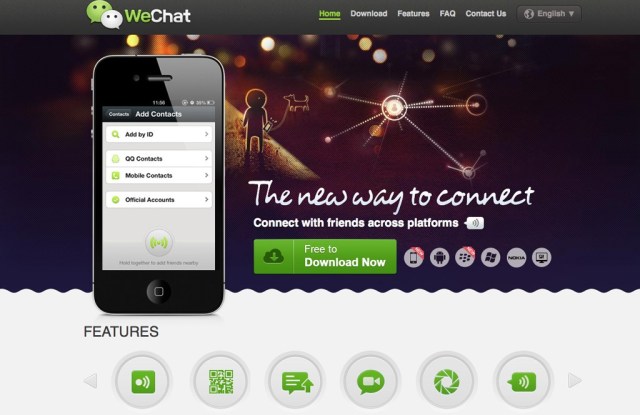 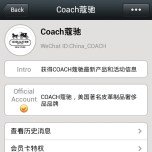 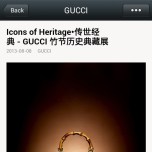 SHANGHAI — A few years ago, digital-marketing strategists were buzzing about how brands needed to tap into Weibo, China’s answer to Twitter, as a platform to communicate with the country’s more than 500 million Internet users.

This story first appeared in the August 15, 2013 issue of WWD. Subscribe Today.

But now there is an alternative. While Sina Weibo, the most popular Chinese microblog site operated by Internet giant Sina Corporation, still remains an important component of brands’ digital marketing mix, a new social networking service has emerged that is rapidly becoming the next must-use tool to communicate with tech-savvy Chinese consumers. It is called WeChat, and since Tencent Holdings, also a Chinese Internet behemoth, launched it in late 2011, the service has amassed some 300 million users, 70 million of whom are located outside the mainland.

In its August report on social media use by brands globally, digital innovation think tank L2 called WeChat the “hottest platform on the planet.”

WeChat (known as Weixin in China) is similar to Whatsapp, a mobile messaging application popular in the West that enables users to send messages using their phone’s 3G or Wi-Fi connection. What makes WeChat unique is that it has rolled into one application popular features from other social networking services as well as a few distinct innovations.

Similar to Facebook’s activity feed, users can share photos, videos and music with WeChat contacts who can post comments about the content. A walkie-talkie function allows users to send real-time voice messages; there is a live video-chat feature, and subscribers can enable a “shake” function to locate users nearby. Users can also form chat groups of friends or with those who have similar interests. Most users are white-collar urbanites between the ages of 20 and 39, according to Tencent.

To say that WeChat is popular in China is an understatement. It is virtually ubiquitous. So much so that Chinese telecom operators have experienced noticeable declines in revenues in recent months due to subscribers no longer using text messages and voice calls for communication. Instead, everyone is using WeChat.

Now brands are trying to figure out how to use it.

Most digital-marketing strategists agree that due to the newness of WeChat, brands’ use of the service is still largely in an experimental phase. Yet many consultants also say that even though best practices for WeChat use are being tested, they are telling clients that it now must be a requisite part of their digital presence in China.

“WeChat is a game changer,” Franklin Yao, chief executive officer of SmithStreet, a Shanghai-based strategy consultancy, said. “With the impact it is having on people’s lives and the way people are sharing information in all sorts of ways, it is an all-encompassing tool. But in terms of how brands are taking advantage of it, it is still very early on because it is so new.

“A year from now, it will be very different,” Yao added.

On Sina Weibo, brands open a verified account and post content ranging from promotions to videos, which can be viewed by sometimes tens of thousands of followers. Communication tends to be one-way, rendering the platform an effective medium to broadcast messages to a mass audience.

In contrast, WeChat allows one-to-one communication between brands and consumers and enables brands to create more targeted marketing campaigns. Similar to Weibo, companies can open a verified account on WeChat, and then begin attracting followers. A verified account allows a brand to post rich media content, such as videos and audio messages, specifically tailored to the platform. Swiss watchmaker Hublot, for example, posts audio messages from executives who share experiences while traveling or visiting jewelry exhibitions.

Brands are using other social media to encourage fans to subscribe to their WeChat account. An increasingly popular way to amass fans is to incorporate QR codes or barcodes into advertising. Mobile users can then scan the codes with the cameras on their phones and immediately become followers of brands.

So far, there appear to be several ways in which brands are using WeChat. Given that users can directly message companies (messages are not seen by other followers), the application is becoming an important tool for customer-relationship management. “A lot of people are using it for customer service,” Rand Han, cofounder of Resonance China, a social-media consultancy in Shanghai, said, adding that users are beginning to ask brands questions about price and product availability directly through WeChat rather than going to a Web site to check.

Digital strategists with Starcom MediaVest Group, a global media consultancy with offices in Shanghai, said that the CRM function has the most potential for luxury brands, which can build upon existing relationships with VIP customers by opening exclusive channels on WeChat for them to communicate with brand representatives. A number of luxury players, including Prada, Louis Vuitton and Gucci, already have accounts.

“CRM is the future for luxury brands on WeChat,” Ker Loon Ang, digital director at Starcom MediaVest Group Shanghai, said, adding that there is the potential for luxury consumers to stay in touch with salespeople from luxury players via WeChat to ask questions about products or find out about exclusive events. “Customers can stay in touch with their personal salesperson all of the time. If a luxury brand gets on WeChat, that is the level of communication needed.”

Another unique feature is location-based marketing. Followers can become members of a brand’s account, which enables the brand to know where users are geographically located. Thus a company could send messages about a promotion in Beijing only to followers located in that city. The location-based function even allows companies to pinpoint messages to users located in a specific district of a city. Or if a WeChat user is a fan of a brand or, say, shopping mall, the user can enable their smartphone’s location-based function and receive promotional news from stores nearby.

Brands are finding other creative ways to use WeChat. Starbucks launched a campaign where followers could send an emoticon to its official account, and in reply the company would send back a song matching the emotion of the emoticon. In Hong Kong, Nike used the platform to reach out to organize outdoor exercise events with its followers.

Clarins is using the application’s geo-targeting feature to send out product recommendations based on the climates in which fans live. In April, Swiss watchmaker Jaeger-LeCoultre launched a WeChat quiz where winners would receive a prize. Followers of Coach can send the word “wallpaper” to the account and receive a special wallpaper to download on mobile devices.

“WeChat is about the depth of communication,” Vivian Zhu, managing director of digital and data and analytics operations in China for Starcom MediaVest, said. “What your followers can get out of the interaction.”

There are mistakes brands can make on WeChat that mainly revolve around talking to followers too much. Digital marketers recommend sending out as few as one to two messages a week to fans. Otherwise, followers might feel overwhelmed. Many say Sina Weibo is losing influence because it has become too commercialized: Chinese are looking at Weibo less because it is overwhelmed with companies constantly sending out promotional material.

“WeChat is intimate, and because it is a mobile platform, it is much more personal,” Ang said. “You receive alerts and messages that are to you. Brands can’t be too intrusive.”

The app is continuing to evolve. In its latest update to the platform, released in August, Tencent has introduced an in-app payment system that allows users to link their bank accounts to WeChat, enabling one-click payment for items from official accounts. There is also a new scanning function that allows users to access product information by scanning an object. For example, a user could scan the bar code of a book and get pricing information or scan street views to get locations.

There are also new types of accounts for brands. In addition to an official account, where companies can post promotional material, there are now service accounts, which encourage CRM activities from brands by enabling them to connect directly with users.

WeChat’s integration of in-app payment pits the platform arguably in direct competition with Sina Weibo, which, in partnership with Chinese e-commerce giant Alibaba, is also exploring e-commerce via its microblog. Early this month, Sina enabled Weibo users to log onto Alibaba’s Taobao.com, the largest consumer-to-consumer online shopping site in China, via their Weibo accounts. Weibo will offer sellers on Taobao special marketing services to promote their products.

In April, Alibaba acquired an 18 percent stake in Sina Weibo for $586 million. In a sign of intensifying competition between Tencent, Sina and Alibaba, Alibaba banned sellers on its shopping sites from subscribing to marketing and promotion apps linked to WeChat.

It remains unclear whether Chinese consumers will make purchases using WeChat. “I don’t know how the monetization part of WeChat is going to fly,” Han of Resonance China said. “If the platform becomes too commercial, then maybe another platform will emerge. Once they start the in-app purchasing, then every brand will want to push their messages, and it could have too much spam.”

But it appears WeChat will remain a force for a while given that more than 400 million Chinese connect to the Internet with their smartphones, which are becoming more accessible due to an abundance of cheap handsets being released on the mainland.

There is also evidence that Chinese are beginning to make more purchases via mobile phones. In the second quarter of 2013, the total sales revenue generated via mobile third-party payment platforms reached 106.4 billion yuan, or $17.4 billion at current exchange, a nearly 65 percent increase compared with the first quarter of this year, according to iResearch, a consultancy focusing on China’s Internet industry.

Tencent is aggressively trying to grow the app’s user base, not only in China but also abroad. The Internet company has launched advertising campaigns in other countries, including one commercial featuring Argentinian soccer star Lionel Messi.

“At the moment, our goal is to create a good product that people like and to acquire as many users as we can,” Katie Lee, a Tencent spokeswoman, said. “It is a very interesting platform for people’s daily lives. A lot of things can be found on WeChat, things that people could not imagine are possible.”