Target is expanding its Design for All concept in the beauty aisle. 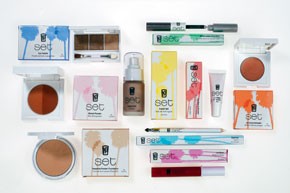 Target is expanding its Design for All concept in the beauty aisle.

This story first appeared in the June 6, 2008 issue of WWD. Subscribe Today.

This August, the Minneapolis-based retailer, which has become best known for its chockablock designer arsenal ranging from furniture by Michael Graves to apparel by Liz Lange, is rolling out three masstige versions of up-and-coming makeup artist lines.

Makeup artists Jemma Kidd, Napoleon Perdis and Petra Strand have signed on to collaborate with the retailer to bring out more affordable and slightly different versions of their existing prestige lines for the Target beauty shopper. The initiative marks a watershed moment for the retailer’s beauty department: Testers will finally be present in the new presentation’s beauty space and will play a large part in introducing the new goods to shoppers.

“We understand that buying cosmetics is different than buying a top or sneakers,” said Joshua Thomas, a member of Target Corp.’s communications department. “When you buy [beauty] there is that emotional investment. We understand and appreciate that and the [new beauty displays] will reflect that.” He continued, “We want to see guests walk in the section of the store and interact with the beauty brands. It gives them a chance to touch, smell and feel the brands.” The new, 11-foot, in-store presentation will also have lit features and classic, bold beauty graphics, Thomas said, adding that each designer will have a bio by their respective product line explaining their philosophy and brand. To make room for the new items, Thomas said the chain took a hard look at its current beauty mix and “right-sized it” based on product performance. The new beauty move is a long-term plan, Thomas added.

Target has already mapped out a marketing and advertising plan, Thomas confirmed, which will include TV, print, online and in-store initiatives, but he would not comment on the retailer’s ad budget. Sources said the chain is planning to spend $15 million in the first six weeks of the products’ launch. The three beauty lines are scheduled to enter about 1,400 Target stores (all but 100 to 150) at the end of August.

Industry sources said they expect the new beauty set to generate between $45 million and $60 million in first-year sales.

Target maintains it continues to have a “successful” relationship with makeup artist Sonia Kashuk, who also falls into the beauty segment of Target’s Design for All campaign, and who sells her own line of makeup and tools at Target.

Each artist Target has plucked for this new beauty deal has a line that is currently sold in a U.S. upscale arena, but with a limited presence. Kidd sells her high-end, technical line Jemma Kidd Makeup School in Bergdorf Goodman, as well as in 18 Neiman Marcus stores. Perdis sells his eponymous line at his four concept stores in California and in Sephora. However, the Sephora partnership has recently soured, he said, and he plans on announcing a new upscale retail partnership soon. Strand, a media darling, sells the line she founded with her sisters in London at the company’s global Web site.

Each have taken a different spin on their original lines for the Target edition but have kept positioning pretty close to its roots.

Kidd’s masstige line, called JK Jemma Kidd, takes a heavy fashion positioning, where each of the 95 products were inspired by the catwalk (Kidd is a former model). JK includes lip, face, eye and cheek items, as well as makeup tools. Prices start at $14 for I-conic Eye Pencil Liner with a built-in sharpener and go to $36 for a Smoky Eye Palette. The color items, Kidd said, have been designed with strong pigment to produce bold statement colors.

“JK goes outside the boundaries of mass cosmetics while also keeping the Target consumer in mind,” she added. Some of Kidd’s favorite items include Colour Adapt Gloss, a clear lip gloss that reacts to the pH level in a person’s skin, giving off a tint respective to that individual. It will retail for $20. She also likes the I-Tech Liquid Liner, for $18, and Mannequin Skin Complexion Enhancer, for $24. Grace Fodor, chief executive officer and president of the company, said Kidd’s cosmetics generate $9.5 million at retail.

Perdis had been working on a diffusion line for several years when he was approached by Target to sell a range in its stores. Perdis, who hails from Australia but now calls Los Angeles home, showed Target executives his project, now called NP Set, and for the past several years the two powerhouses have collaborated on the 85-item line. NP Set, Perdis said, is more fast-paced and playful than his prestige range, and is packaged in slick white containers and housed in white boxes with splashes of colorful palm trees. A star motif is tucked inside boxes, and each category (face, lip, eye) is easily recognizable by its own color code. The products will not have any makeup artist tips on packaging and instead will have the tag line “What’s in it for me?” on the back of boxes, which will then list a product’s active ingredients.

NP Set will be sold in Target as well as Napoleon Perdis concept stores in the U.S. Items include a Memory Foundation, a tinted moisturizer available in seven shades; Liquid Veil, a lightweight liquid tint, and lip glosses with a brush. Perdis executives said NP Set is expected to generate $20 million in retail sales in its first year, which includes the U.S. Target stores, as well as several hundred Target stores in Australia and Napoleon Perdis concept stores, of which there are four.

Pixi Cosmetics, a makeup artist line founded by three sisters based in the U.K., is bringing out Pixi by Petra, which is being headed up by Strand, one of the sisters. The new items for Target will take on the original’s “skin-loving” positioning, and infuse beneficial ingredients into sheer, feather-light shades. “Pixi creates a flawless, photo-perfect finish that leaves women looking like themselves, only better,” according to a Target press release. The collection ranges from $12 to $39.

Retail and beauty industry consultant Allan Mottus is taking a wait-and-see approach with Target’s new beauty move. He is not convinced that more expensive lines and testers make a beauty department.

“They are not doing well in mass beauty,” Mottus said of Target, remarking specifically on the chain’s out-of-stock levels. “Unless you carry the right amount of inventory [any kind of beauty initiative] doesn’t make sense.” On recent store tours, Mottus said that the only beauty brands he saw that were in stock were ones Target has a financial tie to, such as Sonia Kashuk items and its European body brands. “If you can’t maintain a beauty department correctly,” he said, new and more expensive brands don’t fix the problems. “There’s nothing more aggravating to a beauty customer when one-third to half of the shades aren’t in stock. They can’t compare.”

He added that the strong interest by mass retailers in prestige brands is twofold. The first is that the crumbling of the prestige retail landscape has made it unbelievably difficult for anyone except large pocket players, such as Estée Lauder and L’Oréal, to compete. The other is that mass retailers are in an identity crisis.

“Nobody knows what they want to be.”

Target has shown an eagerness to move upmarket in its beauty offering by recently adding Bare Escentuals cosmetics kits and prestige brands Clarins, Kiehl’s and Origins to its mix. Executives from each of those brands said they did not have a direct relationship with Target.