What Do TED, YouTube and Leonardo DiCaprio Have in Common? The ‘Countdown’ Climate Campaign

Christiana Figueres, the U.N.’s former climate change chief, who was a founding partner to both the Paris Agreement and Amazon’s The Climate Pledge, as well as Chris Anderson, TED’s founder introduced the project.

The campaign was announced Wednesday and is created in collaboration with nonprofits Future Stewards and TED, with many others joining in, including YouTube and individual change agents to amplify reach.

Calling the campaign “the most promising thing that I’ve seen,” Christiana Figueres, the U.N.’s former climate change chief, who was a founding partner to the Paris Agreement and Amazon’s the Climate Pledge, as well as Chris Anderson, TED’s founder, introduced the project and its five core components to an array of stakeholders and media.

This called notion to the “celebrity” in climate activism with Jimmy Kimmel appearing in a clip for the campaign cooing about his crush for Leonardo DiCaprio and his hope to see his kids inhabit earth — not Mars. Seated in the front row was actor and activist founder of The Solutions Project, Mark Ruffalo; and in the back was the designer of her eponymous and sustainably designed label, Mara Hoffman. Moral support comes from DiCaprio, Pierce Brosnan, Don Cheadle, Rooney Mara, Joaquin Phoenix and Meg Ryan, among others, who have banded with the Countdown. 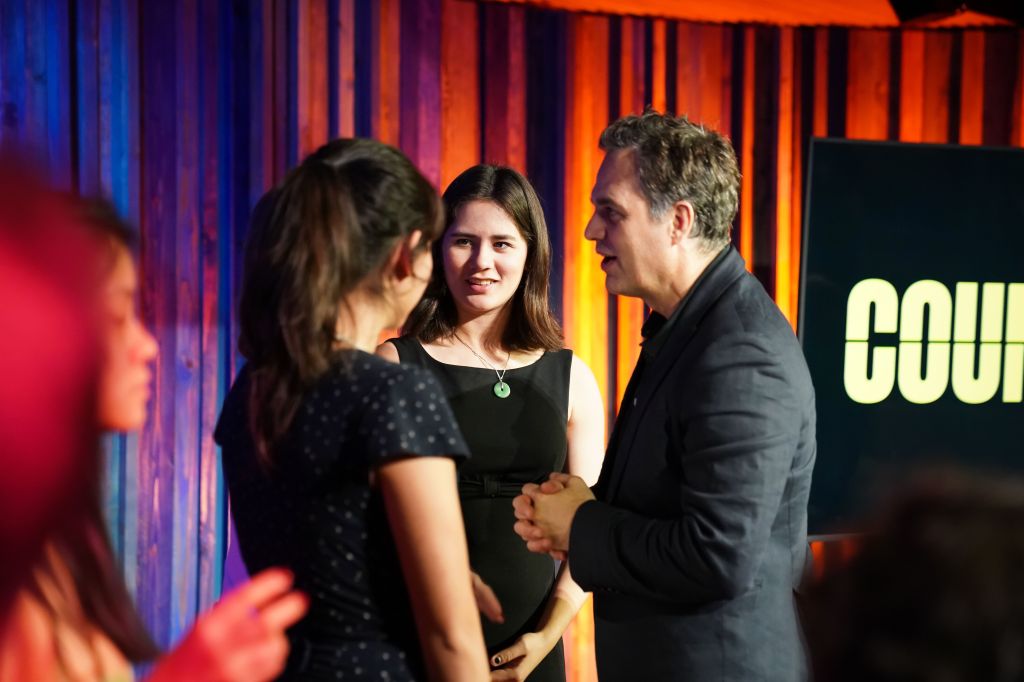 Mark Ruffalo was among a list of celebrity support for TED’s Countdown.  Courtesy Image

Joining by webstream was vice president and environmental activist, Al Gore; historian, philosopher and author of “Sapiens,” Yuval Noah Harari; Johan Rockström with the Stockholm Resilience Centre in Sweden; and others of the scientific community.

Further support comes from a growing network of partner organizations: YouTube (leveraging its creators in a special Countdown educational mission), C40, Global Covenant of Mayors, Climate Reality Project, and others.

Teen activists from Friday for Future and other youth-founded movements like Zero Hour spoke to highlight voices of the indigenous or other underrepresented communities.

The TED community is calling for solutions that extend past its five big questions: how rapidly can we move to 100 percent clean energy? How can we reengineer the stuff that surrounds us? How do we transform the ways we move? How can we spark a worldwide shift to healthier food systems? How extensively can we regreen Earth?

TED announced its Countdown campaign, with imagery that can be downloaded and shared soon.  Courtesy Image

“Countdown invites everyone to play a part in counting the world’s emissions down to zero,” so that come October, all proposals and accompanying commitments for action will be shared with the world. The intention is for global companies, cities and individuals to lend a hand. At a local level, TEDx organizers — operating 4,000 events annually — will bring Countdown content to their immediate communities.

“2020 will be the most important year for climate action,” said Claire O’Neill, from the United Nations COP25 summit in Madrid. O’Neill is set to preside over the COP26 summit in Glasgow, Scotland.

According to the November Emissions Gap Report from the U.N., greenhouse gas emissions have risen 1.5 percent per year over the last decade, with 2018 emissions hitting a new high of 55.3 gigatonnes of CO2 equivalent.

As the fashion industry grapples with its responsibility to climate change, WWD asked Figueres her take on conscious consumption.

“To understand that that linear extraction to discard can no longer be the case. It needs to be circular. We have to go into a circular economy that uses every single resource that we extract because we will continue to extract things not once, but two, three, four — 10 times. Around and around and around in circles — that’s a circular economy. And we have to get to that point because frankly, we are running out of resources,” said Figueres, in a question-and-answer session.

The hope is that the campaign will lead to corporate actions and engagement across all stakeholders leading up to the “Climate Day of Destiny” in October.

What Fashion Statements Mean on the TED Talk Stage