As more retailers unveil plans to open Thanksgiving Day, it’s being dubbed Black Thursday and has the potential to fire up sales — and stir controversy. 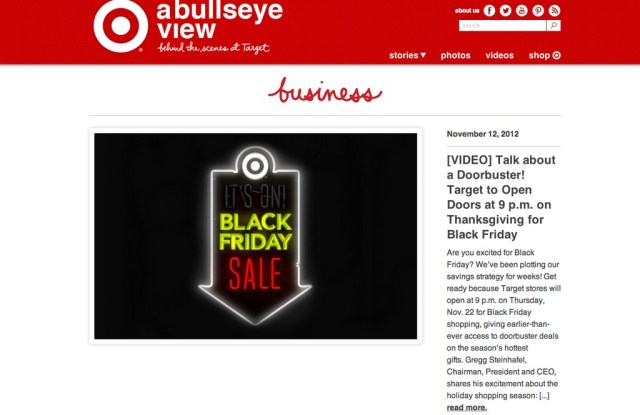 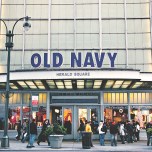 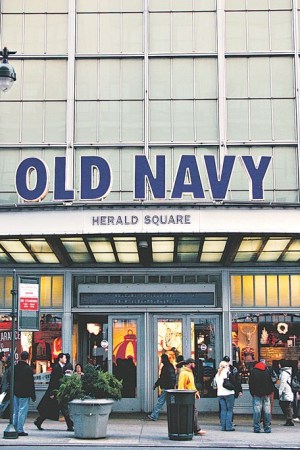 The Gap, Banana Republic and Old Navy will be open on Thanksgiving.

As more and more retailers unveil plans to open Thanksgiving Day, it’s being dubbed Black Thursday and has the potential to fire up sales — and stir controversy.

NPD chief industry analyst Marshal Cohen said that only 12 percent of consumers take advantage of Black Friday sales, and he estimates that half that number will shop on Black Thursday. “But it’s a very healthy consumer base,” he said. “The early bird gets the proverbial worm. Retailers are saying, ‘I want your wallet when your wallet’s full.’”

Stores that opened earlier last year saw sales increase by 22 percent for the Black Friday weekend. “Last year, you had some stores that lost 8 percent if they didn’t extend hours,” Cohen said. “They missed out.”

Target on Monday became the latest retailer to say it will open on Thanksgiving — at 9 p.m. — remaining open through 10 p.m. or 11 p.m. on Black Friday. The retailer joins Wal-Mart, which is opening at 8 p.m. Thursday, two hours earlier than last year. Sears, which was closed on Thanksgiving 2011, will open from 8 p.m. Thursday to 10 p.m. Friday, while Kmart’s holiday schedule is 6 a.m. to 4 p.m. Thursday, to give people time to eat their meals, reopening at 8 p.m. until 3 a.m. on Black Friday. For the first time, Lord & Taylor’s Fifth Avenue flagship in New York will operate on Thanksgiving, from 10 a.m. to 7 p.m.

“Every brand is determined to compete,” a Gap Inc. spokeswoman said. “We deliver a value proposition and shopping experience. We’re very optimistic.”

Also opening on Thursday is Toys ‘R’ Us, but Macy’s, Kohl’s and Best Buy will wait until midnight on Black Friday. While J.C. Penney has campaigned against complicated, ultralow pricing, the retailer tweeted that it will open at 6 a.m. on Black Friday with low prices on gifts for everyone — no coupons or rebates required.

Retailers operating on Thanksgiving face the backlash of traditionalists who believe the holiday should belong to families, feasts and football. Employees of Target Corp. and Wal-Mart Stores Inc. have been vocally opposed to working on Thanksgiving.

“This Thanksgiving, while millions of families plan to spend quality time with their loved ones, many Wal-Mart workers have been told we will be stocking shelves and preparing for doors to open at 8 p.m. on Thanksgiving night,” Mary Pitt Taft, a Wal-Mart worker in Wisconsin, wrote in a letter that was circulated online.

Dozens of petitions were started by Making Change at Wal-Mart, a campaign sponsored by the United Food and Commercial Workers union, which covers retail workers, and others were created on Change.org asking retailers to “save Thanksgiving.”

“Some [petitions] were started by family members who fear their loved ones — the employees — won’t make it home for Thanksgiving,” said Janna Pea, an official at the UFCW.

Pea said there’s no official connection between “our users [the employees who use the resources of the UFCW] and the UFCW.” Neither Wal-Mart nor Target employees are unionized, however, and thus are not represented by the UFCW. Pea said that Wal-Mart workers are planning a press call Thursday to make some announcements. “A lot of workers in October walked off the job,” she said. “It started in California and spread across the country.” The employees who staged the walkouts prior to Wal-Mart’s announcement that it would be open on Thanksgiving were protesting working conditions and wages.

“I’m not saying they will definitely be striking on Thanksgiving and Black Friday. The workers are getting more and more frustrated,” said Pea.

Last November, more than 200,000 people joined Target employee Anthony Hardwick’s Change.org petition calling on the retailer to save Thanksgiving by opening at 5 a.m. on Black Friday instead. Target in 2011 opened at midnight on Black Friday. “We appreciate the flexibility of our team throughout the holiday season and will work to develop staffing schedules that meet their needs as well as the needs of our guests and our business,” a Target spokeswoman said.

“There are plenty of people in this retail environment that are interested in working extra hours for extra pay,” said NPD’s Cohen. “This is not a religious holiday. Nobody is telling consumers they have to shop. It’s the sport of shopping. Not everybody wants to watch the NFL all day. Criticizing stores is like criticizing the movies. The movies are the only thing to do. We’re seeing the birth of a new tradition like Cyber Monday or doorbuster deals. We saw retailers open on Christmas Day two years ago and it didn’t really work, so they didn’t do it again.”

Launching holiday sales earlier is aimed at capitalizing on consumers eager to jump-start their seasonal spending. Most importantly, retailers say, it offers consumers more choices of when and how to shop. “Overwhelmingly, the customer appreciates having the option either way,” said Tom Aielo, senior vice president of Sears Holdings Corp. “As consumers are plotting and planning out how to attack Black Friday shopping, this is another option. Of course, factors like competition and operations come to bear” in the decision to open on Thanksgiving.

Black Friday deals have been finding their way to the Internet earlier and earlier each year. Sears plans to offer Black Friday deals on Nov. 18 to members of its Shop Your Way Club. “It gets back to that convenience factor,” Aielo said. “We have more shoppers than ever who will shop on their smartphones. Others will buy online on Thanksgiving and pick up in store. Everything will evolve at the customers’ pace. Customers don’t want to give up their holiday time. Kmart is open on Christmas, while Sears reopens the day after Christmas. There’s not so much of a rush to creep into Christmas.”

“Last year, Target tested limited Thanksgiving Day hours at a small group of stores in the Denver market,” a spokeswoman said. “The test provided some key insights. Our goal was to ensure that Target exceeds our guests’ expectations and meets business goals. The holiday season is highly competitive, and Black Friday is one of the busiest shopping days of the year. Target’s opening time was carefully evaluated. Opening at 9 p.m. gives Target’s Black Friday guests added convenience and a way to create an after-dinner shopping event that the entire family can enjoy.”

“Customers have grown accustomed to shopping at their convenience,” said a spokesman for Lord & Taylor. “It’s increasingly an omnichannel world. It’s online, in-store, multitouch points. If there wasn’t an appetite for this, it wouldn’t be happening.”

Lord & Taylor is advertising Thanksgiving specials on the day of the holiday through social media. “The opportunity we see is a lot of tourists will be in the city and out for the Macy’s Thanksgiving Day Parade. It’s not that we’re trying to get people away from their dinners.”

Cohen said there are a lot of impulse purchases that can be made in stores, but may be missed when shopping online. “Retailers want to get you in the store,” he said. “You see the extra deals, the impulse items jump out at you. They want to compete against other brick-and-mortar and online retailers. Opening stores on Thursday is only going to front-load the business. Consumers still have the same income. They may buy a little more for themselves. Last year’s growth came from self-gifting. A big chunk of change was spent on self-gifting.”

Carol Spieckerman, president of Newmarketbuilders, a retail consulting firm in Bentonville, Ark., said, “There are people who enjoy shopping with the family as an activity on Thanksgiving. The fact is that online retail is 24/7 every day of the year. If a brick-and-mortar store goes dark and online is clicking away, there’s a break in the omnichannel loop. In highly competitive e-commerce categories, brick-and-mortar stores have something to gain by putting their deals out there sooner. Omnichannel and competing against Amazon are big reasons to open on Thanksgiving.”

Black Friday deals are being released earlier and earlier.

“Three years ago, Wal-Mart was threatening to sue people who hacked into its system and released Black Friday deals,” said Candace Corlett, president of WSL Strategic Retail. “They couldn’t prevent the leaking of the deals, so they now release them themselves. The question is, are the pre-Thanksgiving sales and Thanksgiving Day deals diluting Black Friday? I don’t think so. Black Friday is a cultural movement and a tradition for one-third of the population. We’re a shopping nation. Enough sitting around with the family on Thanksgiving Day, let’s celebrate our blessings by shopping.”