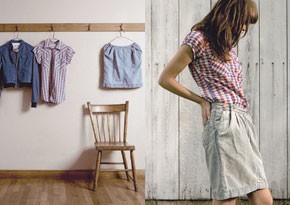 LONDON — The U.S. embassy on Grosvenor Square here is still ringed with concrete antiterrorism barricades, and in Britain it’s as fashionable as ever to decry President Bush’s foreign policy. Whatever their views on U.S. politics, though, it seems the Brits — and many of their European counterparts — keep grabbing a venti latte in Starbucks or stockpiling American Apparel’s rainbow-colored T-shirts.

Public opinion in the U.K. continues to be vehemently opposed to the British government’s cooperation with the U.S. in the military actions in Iraq and Afghanistan. Indeed, a German Marshall Fund poll published in September found 77 percent of the Europeans surveyed disapproved of Bush and his international policies. One of the British newspapers’ most famous satirical cartoons of the past few years featured former British prime minister Tony Blair caricatured as Bush’s pet poodle.

Nonetheless, say shoppers, branding experts and American fashion executives, the political opposition typically is not coloring people’s view of American goods. “In a consumer society, how you look and how you feel rules over everything else,” observed Isabelle Szmigin, a marketing professor at the University of Birmingham. “Buyers of fashion brands have been found to be very nondiscriminating as to the source of their clothes. If you look at Gap’s recent situation, it just doesn’t matter that much,” Szmigin said of people continuing to shop there, despite reports in the British press in October that child laborers in India were making Gap clothes, a problem the retailer said it is attempting to remedy. “People shift between different segments of their personality.”

For example, Nancy Hewitt, a 46-year-old designer shopping in Gap’s Covent Garden store, said only explicit American branding would put her off products from the U.S. “There’s no way I’d buy a T-shirt with stars and stripes — but I wouldn’t wear anything that had free advertising for a brand on it,” she maintained.

Georgina Copeland, a 28-year-old writer interviewed outside an American Apparel shop on London’s Carnaby Street, said, “I don’t think politically about what I buy. It is really hard to avoid American brands. If I thought about it that way….I would have to stop using Fashion Fair and Mary Kay [makeup], and I don’t know how I’d relax my hair.”

Consumerism apparently trumped the political ideals of Rowan Lowe, a 20-year-old University of London student, as she patronized a Starbucks in Covent Garden, in part because it accepted debit cards as payment. “I would never [normally] shop at Gap and Starbucks, as to me they are the face of capitalism,” Lowe stated. “I try to avoid American brands,” she said, “but I do sometimes shop [Starbucks] as there are not that many independent coffee shops. You don’t always have a choice.”

These shoppers were typical of the sort described by brand consultant Rita Clifton, who observed, “First and foremost [consumers think], ‘Do I like this brand? Is it for me?'” Only after that, continued Clifton, chairman of the U.K. unit of consultant Interbrand, “is a brand’s origin part of its appeal.”

For 2007, seven of the 10 global brands Interbrand rated as the strongest worldwide were U.S.-based, including Coca-Cola, ranking first; Microsoft, second; IBM, third; General Electric, fourth; Intel, seventh; McDonald’s, eighth, and Walt Disney, ninth. The Interbrand rankings of the top 100 brands are based on its assessment of a brand’s current and projected net sales, its influence on a customer’s decision to buy it at point-of-purchase and its ability to secure loyal customers. The dollar value Interbrand subsequently attaches to each brand — say, $12 billion for Nike, $5 billion for Gap or $3 billion for Polo Ralph Lauren — represents the consultant’s estimate of how much a brand is contributing to its company’s market capitalization, Jez Frampton, Interbrand’s global chief executive officer, said in an interview earlier this year.

“A lot of people are able to separate the U.S. political system from U.S. culture,” said Suki Larson, ceo of Provenance, the luxury goods arm of ad agency M&C Saatchi. “A lot of people love what’s great about the States. It’s viewed as having strength in outdoor brands, such as The North Face and Patagonia, and in items rooted in technology, such as Tumi and Samsonite.”

Buoyed by their popularity in Europe, several U.S. brands are raising their profile in the region. American Apparel opened a store in Glasgow on Nov. 19, followed by its fifth store in London, in Covent Garden, on Nov. 26. Its sixth store in London, at Oxford Circus, is set to bow Monday, giving the retailer eight U.K. stores. A CK Jeans store, also carrying underwear and accessories, is slated to make its debut Dec. 5 on London’s Regent Street, and in the spring a CK jewelry and watch store is scheduled to open on South Molton Street.

Mark Cuthbert, European managing director of Wrangler, said while the brand’s products in Europe are “designed by Europeans with Europeans in mind,” customers here see it as one of the original jeans brands and thus associate Wrangler with America.

Indeed, Wrangler’s European in-store promotional images for spring will focus on edgy, pared-down portrayals of models on windswept plains, rather than product attributes like fit or quality, to appeal to a trend-led audience. The brand’s American roots will also be referenced in Wrangler’s upcoming spring collection, inspired by the Amish community, and in what Wrangler calls the line’s “uncomplicated and functional approach to life and work.”

Some of the American names have lost ground in the past year in Interbrand’s list of 100 best global brands, including Budweiser, ranked 30th; Dell, 31st; Ford, 41st, and MTV, 52nd. “To a degree, sectors determine brand strength in various parts of the world,” Frampton said. “Car marks in Britain mattered more several years ago than they do now. China is chasing fashion brands.”

Interbrand cited growing competition from lower-priced chains and designer labels in determining Gap’s brand value had fallen 15 percent to $5.48 billion, ranking it 61st, down from 52nd in 2006. Gap has taken some steps recently to make the brand more relevant to fashion consumers outside the U.S., including:

– Offering for the first time a fall collection that is designed entirely by a European team.

– Tapping Marie Amelie Sauve, a Balenciaga stylist and an editor at French Vogue, as design consultant.

– Launching in October Gap Design Editions footwear in collaboration with French designer Pierre Hardy, on the heels of a 2006 collaboration with London-based designer Roland Mouret. Most of the Mouret styles sold out, according to a Gap spokeswoman.

In the end, Europe tends to share more Western values and ideals with the U.S. than some other parts of the world, so alterations in a U.S. brand’s image stem from trends in relatively small locales. American advertising used to be about the country’s freedoms and the world’s global nature, Clifton observed, adding, “now a lot of countries feel as though they’re free.”