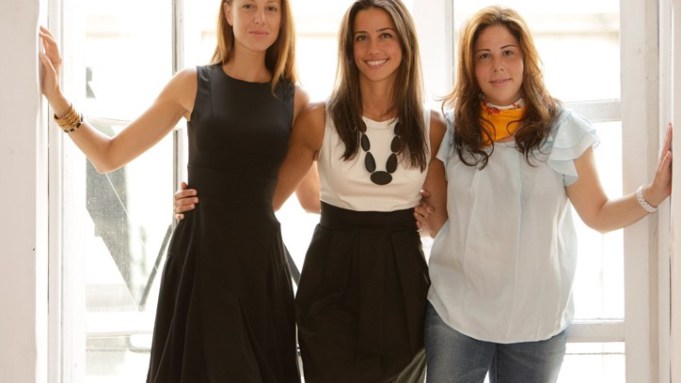 After working on several fashion collaborations over the years, Warner Bros. is moving full-steam ahead with a long-term, global Supergirl branded contemporary sportswear line, ready for resort selling. The line is designed by the trio of Shoshanna Lonstein Gruss, Alice Roi and Laura Poretzky.

The three designers have known each other for years — they’re childhood friends who grew up in Manhattan and knew each other through the New York private school scene. Lonstein Gruss, who runs her Shoshanna contemporary line; Roi, who has her signature brand, and Poretzky, owner and designer of Abaeté, came together to collaborate with Warner Bros. after being approached by Marc Beckman, founder of Designers Management Agency, who put the deal together.

Beckman, who is married to Roi, said that when Warner Bros. first called him with the idea for a Supergirl fashion line, he thought it was a silly idea. But after giving it more thought, the proposal grew on him.

“I started to think of a nonliteral interpretation of Supergirl and it started to make more sense,” Beckman said.

He presented the idea to Roi, who immediately thought of her other designer friends, Lonstein Gruss and Poretzky.

“They all knew each other growing up, and all have their own businesses and own signature styles,” Beckman said. “I saw them as a good super team.”

Roi is known for her downtown-inspired edgy designs; Lonstein Gruss made a name for herself with her playful contemporary dresses, and Poretzky has become known for her clean, more uptown-looking collections.

“[Warner Bros.] gave us some direction and we decided to part ways and each come up with some ideas for the line,” Lonstein Gruss said. “When we came together, we all picked out what we liked about each other’s designs and mixed it all together.”

Poretzky continued: “We took pieces from our lines, our best ideas from the past, and put them together to create this line, which is truly representative of all of us.”

While their names do not appear anywhere on the labels or the garments, all of the designers agreed their signatures are pretty clear — there’s a patent leather motorcycle jacket (very much inspired by Roi’s downtown aesthetic), a gingham romper (which has become a signature in Lonstein Gruss’ collections) and a pleated wool dress (clearly inspired by Poretzky’s uptown look).

“When we were creating the line, we talked a lot about how we would wear it,” Lonstein Gruss said. “We all worked to push each other into new directions, which helps us a lot when it comes to our own collections. Laura and I never thought we would be putting Alice’s metal studs on a dress, but mixing those things worked well in the end.”

Roi added, “I never thought I would be working with lace, but I think it looks great. It’s really three different perspectives, all wrapped into one collection.”

The Supergirl shield logo is placed subtlety throughout the collection — embroidered on a button, branded on a snap or stamped on a small leather patch on the pocket of a pair of jeans. The first collection is made up of about 35 pieces and includes wool day dresses, silk party dresses, silk blouses, cotton skirts, patent leather jackets, a twill trenchcoat and cotton twill denim jeans.

While Supergirl is as a fictional comic book heroine and the female counterpart to Superman, Barry Ziehl, senior vice president of worldwide marketing for Warner Bros. Consumer Products, said the line has nothing to do with the character.

“The whole idea behind the Supergirl shield is a feeling of empowerment — when a girl wears the clothing, she will feel empowered. That’s what we want to get across with this collection,” he said. “The voices of the girls behind the symbol of empowerment will be the three designers.”

Ziehl said that, when the idea came up to do a Supergirl fashion line, he wanted to make sure to pick a group of female designers who already had a strong retail presence.

While details of the marketing strategy for the brand are still being worked out, Ziehl said he plans to have Lonstein Gruss, Roi and Poretzky at the forefront of any sort of marketing campaign.

“Their story as three successful designers who are longtime friends from New York is in itself inspirational,” he said. “All three girls are really open to being spokespeople.”

Beckman said the deal is for the long term and will include multiple categories. He is hoping to launch Supergirl fragrance, footwear, children’s wear, outerwear, swimwear, handbags and other accessories. Most likely, these will be through licensing deals, since the three Supergirl designers are also busy working on their own lines.

The collection, which wholesales between $23 and $193, is being targeted to high-end department and specialty stores worldwide. Warner Bros. plans to preview the line at the MAGIC show in Las Vegas next month.

While this isn’t the first Supergirl branded collection, it is by far the most aggressive, as industry sources estimate the new line could bring in about $10 million in first-year wholesale volume. Warner Bros. is known for lending its large archive of characters to fashion. Supergirl in particular has been on Junk Food T-shirts and Havaianas flip-flops, while characters from Tweety Bird to Batman have been selling on apparel at retailers ranging from Kmart to Kitson.

Superheroes in general have been a major trend in fashion — “Superheroes: Fashion and Fantasy” was the latest exhibit from The Costume Institute at the Metropolitan Museum of Art in New York, and contemporary designer Diane von Furstenberg said Wonder Woman was the inspiration for her holiday collection.�