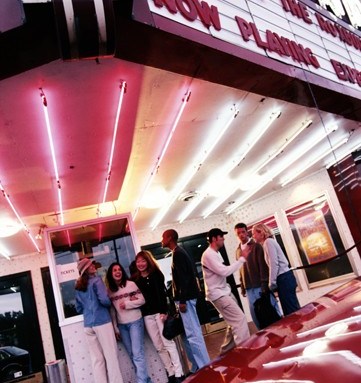 The simple pleasures are in vogue as consumers perform triage on their spending habits.

As the anxiety index rises, many are turning to chocolate, quarter-pounders, gym memberships — presumably to work off the chocolate and the quarter-pounders — gardening, sewing and the movies for relief to help treat wounded psyches. The trend has been set in motion as luxury and moderate stores, among others, take big hits.

“There is definitely one collective mind-set across all consumers at the moment: People want to control the things in their lives that they can control,” said Phil Rist, executive vice president, Strategic Initiatives at BIGresearch, a consumer and retail research firm based in Worthington, Ohio. “That’s why you’re seeing upticks in escapes, such as going to the movies, or indulgences in comfort food. Consumers of all ages and income levels are being bombarded with so much change with the economy, gas prices, etc., that they feel out of control, not in charge of their lives. They will be drawn into more of those things that they can be in charge of.”

In addition, cutting back on Internet use, cell phones and cable TV doesn’t seem to be on the radar in an era of instant communication and information.

“We’re noticing that consumers are getting rid of their redundant services,” said Rob Enderle, principal analyst and president of The Enderle Group, a technology advisory firm based in San Jose, Calif. “So if someone has both a landline phone and a cell phone, they will choose the cell phone and dump the home connection. They’re holding onto these things because they consider them to be items they cannot live without.”

Consumers depend on the Internet to “job search, or to just stay connected,” he said. “People still want to feel good, and watching cable TV and being on the Internet are things you can do at home — inexpensively.”

Along with higher movie box office revenue, DVD rentals are robust and discounts have a certain cool factor.

“Bargain hunting is fashionable again,” Rist said. “It’s now a badge of honor to say you purchased something at a discount. People will brag about how little they paid for an item, versus five years ago, when it was all about how much they paid.”

Although opportunities abound for those looking to save a buck, “millions of consumers have literally lost their entire incomes,” said Michael Solomon, professor of marketing and director of the Center for Consumer Research at Saint Joseph’s University in Philadelphia. “And those who aren’t directly affected by the recession — the ones who haven’t lost their jobs — are still being affected by what they’re reading and seeing on TV everyday. It becomes a self-fulfilling prophecy.”

How to cope? Heading to the gym is gaining in popularity.

“Gym members with existing memberships are using them, even more so, to get the most value and justify the price,” she also said. “Numerous studies that show people who work out are happier.” Club owners and operators are “saying to their members, ‘We know it’s tough, but you can’t compromise your health.’”

Exercise and comfort food aren’t mutually exclusive, however, especially in a down economy.

McDonald’s Corp. said global same-store sales grew 1.4 percent in February and U.S. same-store sales increased 2.8 percent. With customers more cost-conscious than ever, the company said the boost came partly on its chicken offerings and core menu items like the Quarter Pounder, and beverages and breakfast products.

The Hershey Co., North America’s largest chocolate company and the maker of Hershey Kisses and other iconic products, said in January that its fourth-quarter profits jumped 51.2 percent to $82.2 million. Sales were up 2.6 percent to $1.4 billion.

“There’s nothing more secure than reaching for a chocolate bar, because it has always been one of those things we fall back on — during the good and the bad,” said Marcia Mogelonsky, senior research analyst for the Mintel Group. “Most people, regardless of their current economic situation, can still find a way to buy a piece of chocolate.” She pointed out that accessibility is also key for this indulgence. “It’s everywhere. Whether it’s Mars, Hershey, Godiva or Lindt, consumers will find it.”

On a more utilitarian level, food gardening in the U.S. is on the rise, according to a new survey from the National Gardening Association. Seven million more households plan to grow their own fruits, vegetables, herbs or berries in 2009, up 19 percent from last year.

“As in previous recessions, we’ve seen increased participation in and spending on food gardening as people look for ways to economize,” said Bruce Butterfield, research director for the association. “That said, these results suggest the interest in food gardening may continue to increase, even after the economy improves.”

With apparel sales declining, interest in sewing is on the rise. The Sewing & Craft Alliance, based in Monroeville, Pa., estimates that there are 35 million home sewers in America, up from 30 million in 2000. And New York-based Scarborough Research surveyed more than 200,000 people last year and found that 27 percent of women favored sewing as a leisure activity.

“People are likely to spend less money on designer jeans during the recession, and instead they purchase more affordable jeans, or they try to preserve the old ones, which leads to higher demand for sewing machines and accessorizing tools by consumers,” according to RecessionInfoCenter.com, a Web site wholly dedicated to the current economic downturn.

In the entertainment sector, movie theater tickets and DVD rentals have spiked: Netflix Inc. said in January its fourth-quarter profit jumped 45 percent to $22.7 million from a year earlier, along with sales growth of 19 percent to $359.6 million. The number of subscribers climbed 39 percent to 9.4 million for the period. And the company revealed last month that it had passed 10 million subscribers, including 600,000 net subscribers since Jan. 1.

Box office movie revenues through March 1 reached $1.9 billion, a 17.3 percent increase from the same period a year ago, according to Hollywood.com’s Media By Numbers. Attendance has risen by almost 16 percent, compared with the same period last year.

“We’ve seen momentum building since Christmas,” said Paul Dergarabedian, box office analyst for Hollywood.com. “It was the beginning of this real fervor, a real excitement by people to go to the movies. They’re looking at it as a guilt-free pleasure that’s not going to break the bank. And it gives them a couple hours of relief from the outside world, which is — to put it mildly — rather challenging right now.”

So much of the fare is escapist. Top-grossing movies this year include “Paul Blart: Mall Cop,” “He’s Just Not That Into You” and “Watchmen.”

“These don’t have to be Academy [Award]-worthy films here,” Dergarabedian said. “They just need to deliver a great experience for consumers. Now more than ever, that movie ticket has to have value.”

And those tickets could amount to a huge summer at the box office. With potential blockbusters such as “X-Men Origins: Wolverine,” “Star Trek,” “Terminator Salvation” and “Trans­­formers: Revenge of the Fallen” set for release. “We could be looking at the first $10 billion year,” Dergarabedian said.

However, the industry as a whole is feeling the effects of the recession. “Moviegoing may be up, but it’s been hard to get financing for movies,” he said. “Staffing is being cut back, costs are being trimmed.”

Movie theaters have been offering deals and specials with their snacks and meals, in order to entice consumers to spend a bit more for their experience. AMC Theaters, for example, has a number of discount offers on its Web site, while Landmark Theaters offers discounts on its snacks when using a Visa Signature card.

Experts said the trend toward fundamentals should convey a message to companies navigating the challenges of economic turmoil: Don’t abandon the core customer or the core message and put as much emphasis as possible on value.

“Brands need to convey in different ways that companies have the consumers’ best interest at heart. Firms…have to make a profit, but you have to have your consumer at the forefront,” said Gerald Zaltman, professor emeritus at Harvard Business School. “Right now, you have to connect and demonstrate how your company, how your brand, offers a positive experience for your consumer.”