It’s now clear the game isn’t as simple as keeping the share of a marketing budget for a magazine versus a Web site. 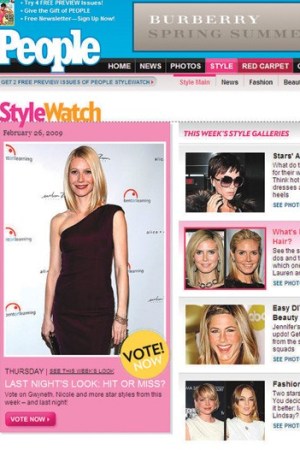 There’s hype — and then there’s reality.

As the magazine publishing industry suffers through one of the worst advertising downturns in history — and newspapers simply struggle to survive — separating out what’s cyclical (the recession, it’s hoped) and what’s secular (readers and advertisers purportedly fleeing for the Internet) has become more complicated than ever.

There was, in recent years, the theory that the Internet would destroy traditional media, grabbing all the marketing dollars for Web display ads, social media, iPhone applications or whatever the most recent gadget was. In more flush times, the picture actually varied significantly. While newspapers saw their comparative advantages largely displaced by technology, magazines benefited from appealing to niche audiences, and high-end glossies thrived by offering luxury goods advertisers access to affluent customers.

Still, a downturn in that sector hasn’t necessarily meant the death of all magazines. Advertisers are devoting more of their budgets to the Web because of the tracking abilities it offers, but there are few signs they are deserting print entirely. The vast majority of fashion ad spending has remained devoted to print, and there are no signs a legitimate online business model has been developed that allows publishers to charge for a Web ad even half of what they do for a print one.

It’s been a long time since the measure of success in the media world was say, capturing a page for Harper’s Bazaar versus In Style versus Vogue, and it’s now clear the game isn’t as simple as keeping the share of a marketing budget for a magazine versus a Web site. Fashion and luxury advertisers are shifting spending to events and other consumer promotions, and using other parts of their marketing budgets to create their own content, be it online or in print. Fashion advertisers are still most comfortable in print, but luxury brands are increasingly comfortable with using the Web to market themselves as well.

When the advertising market was flush, the concept of millions flocking to a Web page to read a free article — and thus look at an ad — seemed like a slam dunk for publishers who could draw the page views. But as the economy has cratered, significant questions have been raised over whether a sustainable business can be built on all those eyeballs. An average Web ad is pennies per million views versus tens of thousands for a print one, hardly a viable model to cover the cost of producing content. And now, as even pennies are being counted carefully, it’s no wonder the media conversation has recently shifted to a rethinking of free content. Publishers from The New York Times to Time Inc. have revealed that they are considering charging for some — if not all — of their content.

The recession poses a set of new questions for magazines and digital properties, both freestanding and twinned with print titles. When everyone is cutting their marketing budgets, are digital investments that were slow to offer returns still a good bet for media companies? Will fashion advertisers that were experimenting with the Web now embrace it, or will they go with the tried and true — to the extent that they go with anything at all?

According to TNS Media Intelligence, in 2007 the apparel industry spent $2.2 billion advertising in consumer magazines, representing 75 percent of the overall spending, as opposed to $54.2 million advertising online, a mere 1.8 percent. And in the first three quarters of 2008 (the most recent figures available), those breakdowns barely budged — except to nudge the Internet’s share slightly down to 1.2 percent.

And even if magazines’ Web sites capture a share of the Internet advertising or sponsorship out there, online display advertising by their major clients remains tiny. A ranking of display advertising by the apparel industry compiled by TNS Media Intelligence shows that LVMH spent $186,281 on Internet display advertising in 2008 — only slightly more than the quoted rate for a single ad page in Vogue. That company and its peers presumably spend more on their own Web sites and on nondisplay Internet marketing, but as long as fashion and luxury companies were still laying out some money on marketing (however currently diminished), magazines were enjoying plenty of it.

The first quarter of 2009 showed a brutal retrenching in print advertising, where 30 percent ad page declines weren’t unusual among many magazines that depend on fashion and luxury dollars. This followed Publishers Information Bureau data indicating magazine advertising had declined 7.8 percent in 2008 over the year before, with the apparel and accessories and the retail categories reflecting those cuts in similar proportions.

The slashing of marketing budgets has hit Web spending less, albeit the base is substantially smaller. EMarketer, a market-research firm, predicted earlier this year that online-advertising spending in America will increase by 8.9 percent in 2009, rather than the 14.5 percent it had forecast in August 2008.

While it’s by no means the case that all of the lost dollars jumped to the Internet, according to several publishers and fashion marketers, fashion brands are experimenting more than ever with Web advertising, drawn to the low cost and the accountability it offers in lean times — not great news for traditional publishers. And whereas once a high-end brand might have been reluctant to advertise in an apparently less prestigious environment, there is now an array of established media companies with increasingly developed Web presences — say, the New York Times’ Moment blog, or Style.com — as well as successful independent fashion blogs that are more established and well-read.

Take Glam.com, which is primarily an ad network for fashion blogs, with some original content. Advertising grew by more than 200 percent year over year in 2008 versus 2007, with increased commitments from Macy’s Inc., Target Corp., Neiman Marcus Inc., Armani and Nine West. Other advertisers included Swarovski, Elizabeth Arden, Revlon and Kate Spade. Samir Arora, founder of Glam.com, said that despite the economy, Glam continues to grow and he expects to add 30 more employees in 2009.

“The ability to analyze ROI means there’s even more focus on online advertising in this kind of environment,” said Paul O’Regan, executive vice president for communications at Oscar de la Renta. “That’s especially true when you consider media plans which can involve 100 grand per page to be the ‘right’ media environment. These days, we’re looking at a more unified approach because of a direct or indirect alignment with driving sales.”

Other benefits, said O’Regan, include the ability to target specific demographics and focus on proven customers.

Advertisers are concerned about “performance and moving product,” said Fran Hauser, president of the digital assets at Time Inc.’s Style and Entertainment Group, which includes People, People Stylewatch, In Style, Entertainment Weekly and Essence. “On our end, we’re working harder than ever to really understand what success looks like for the advertiser, and monitoring the performance and optimizing as we go.”

Notably, the TNS figure on the apparel industry’s advertising spending on the Internet only counted display advertising, excluding paid search, broadband video or any recent innovations such as iPhone applications and social media. It also by definition did not count the branded content and e-commerce portals that retailers and fashion brands are building for themselves. These elements are increasingly significant prongs of many digital marketing strategies.

Larger cultural shifts are at work, too, as the long-promised innovations offered by newer technologies like the iPhone and by social networking start to take off. David Sadigh, managing partner at IC Agency, a Geneva-based online media strategy firm, said many managers of luxury brands in Europe initially looked askance at social media, but were galvanized by reading in the European press about the Obama campaign’s success with it. “The bottom line is that if the President of the United States was being elected in part for his ability to communicate and leverage social media, then luxury brands could also use to it to create connections,” he said.

Still, he added, not only are luxury companies cautious about stewarding their brands and keeping them in the “right” environment, they’re still figuring out how to maintain the sense of exclusivity that has long been a selling point in the fundamentally open and democratized medium that is the Internet. (As a result, some of his clients have had success with affinity-based online clubs, made easy by the Internet, but with the exclusivity conferred by membership.)

It’s no wonder that, as Hauser put it, “mass retailers were early adopters. A lot of the things they’re asking for are much more sophisticated, with a more granular target” than those of luxury brands, which are supposed to be the ones at the cutting edge. Thus retailers are buying more customized Web elements, such as customized video or editorial on Web sites. At People, J.C. Penney Co. Inc. recently sponsored a customized Hollywood hangman game on People.com.

At Condé Nast’s Style.com, H&M sponsored the site’s debut iPhone application in September, which allowed visitors to view photos and reviews of the collections, and debuted a similar application for Men.style.com.

In other cases, some retailers are investing in their own Web content in an effort to lure more shoppers to their sites, further eating into budgets that once would go to advertising. Banana Republic recently launched its “City Stories” spring campaign featuring nine emerging musicians including Sara Bareilles, Liz Phair and David Sanchez. Included is a new microsite on bananarepublic.com that includes behind the scenes video about the musicians, along with music downloads and shopping offers. In addition, the retailer also created a partnership with iTunes to offer a customized album of the artists’ with an in-store purchase.

Michael Kors has been experimenting with paid search, said Billy Daley, vice president of global communications, based on the understanding that consumers tend to shop by typing, say, “Michael Kors sandal” into Google. The company is trying to ensure that its own site appears atop that list. Oscar de la Renta has also had success with e-mail marketing, said O’Regan.

None of this necessarily means that Vogue, Vanity Fair or any other glossy magazine will see the high-production-value campaigns that are their bread and butter vanish.

“Print isn’t dead. The traditional message is still a valid one,” said de la Renta’s O’Regan. “That’s not to say online won’t take a bigger market share in the years to come.”