The Skinny on a New Fit System

With poor fit the main reason women return apparel, a new sizing system, developed to fit three body types, could be on the horizon. 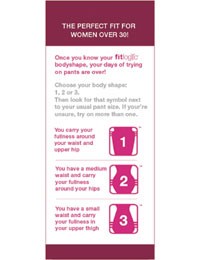 NEW YORK — With poor fit the chief reason women return apparel to stores, is it possible a new sizing system, developed to fit three different body types, could work well for as many as 90 percent of the country’s adult females?

Cricket Lee, president and chief executive officer of Fit Technologies, believes she has indeed found fit’s holy grail for leading-edge Gen-Xers and most Baby Boomers, women aged 35 to 55. Currently, more than one-third of the apparel returned by American women — 35 percent — is brought back to stores because it doesn’t fit well, according to NPD Group.

Lee, 52, has created a system dubbed Fit Logic, based on three body types, each of which are accommodated in three ranges of misses sizes 4 through 24. The first body type, or number 1, is aimed at women who carry fullness at their waist and upper hip; the second, or 2, is for those with medium fullness, primarily at mid-hip, and the third, 3, is for small-waisted females with fullness in their upper thighs. A decimal system denotes a size and body type: 8.1, for example, for a woman who wears an eight and has a body type of 1.

Women will get their first crack at seeking a good fit in slacks via the Fit Logic system Nov. 1, when it bows for some of the Jones New York Collection in 20 Macy’s East locations, including Herald Square, Roosevelt Field, and Paramus, N.J. That debut will be followed by a mid-November premiere of three pairs of pants in a “Jones Elements By Fit Logic” segment on QVC’s “P.M. Style” and a February introduction of the Fit Logic system in the Garfield Marks Options collection at Nordstrom.

Subsequently, QVC plans to offer the Jones Element-Fit Logic pants on at least one program in February, and again in either April or May, said Annette Repasch, QVC’s director of career apparel.

The slacks on offer in those three venues will be primarily careerwear pieces, with suggested prices going from $59 to $225.

Body shapes tend to change significantly three times in a woman’s life — around ages 20, 35 and 55 — and those variations, Lee said, along with a 60-year-old sizing system that hasn’t evolved with women’s changing body types, has made a good fit harder to find.

It’s with that in mind that Jones has taken a stab with the system, angling for grassroots buzz to breed demand. “We appeal to busy women who have little time to try on lots of things and want their lives made easier,” said Mark Mendelson, group president of better career brands at Jones Apparel Group. Prices of the Jones items were not affected by the adoption of the new fit system; solid, tailored pants remain $99, for example. If Jones finds success with the 20-store test at Macy’s, Mendelson said Fit Logic might be applied next to the Jones New York Platinum group of seasonless, triacetate, navy, black and brown suits.

The question for Fit Logic and its fashion-brand partners is whether consumer demand will compel retailers to dedicate three times the space normally commanded by an apparel display to carry brands with sizes tailored to each of three body types. That’s one reason it has taken three-and-a-half years for Fit Logic to develop and sell the system to a handful of fashion brands and stores, with the breakthrough coming when it captured the interest of Nordstrom in April.

Fit Logic’s system is hardly the first attempt to alter the way apparel fits according to body type. Body scanning technologies have been mounted by brands including Lands’ End, Levi’s, and Lane Bryant. But such advances alone have not led alternative fit systems to be widely adopted, in part, Mendelson said, because technologies like body scanning can be an uncomfortable experience for the shopper. “There’s been a lot of technology brought to bear in getting a more custom fit for the consumer,” acknowledged Howard Feller, a managing director at Marketing Management Group, who is consulting with Fit Logic. “The approach here is more about getting the stores proactively educating consumers about how things fit.”

The plan is for the stores to serve as one of various marketing platforms for Fit Logic co-branded apparel. Nordstrom, for instance, is considering a point-of-sale educational video and the placement of explanatory posters in dressing rooms, and its sales force will be trained to inform customers about how the fit system works, Lee said. At Macy’s, salespeople may be outfitted with buttons or ID necklaces that say “Ask me about Fit Logic.”

The co-branded apparel will sport hang tags with the names of the fashion brands and Fit Logic, plus descriptions of the system’s three body types, paired with illustrations of the corresponding body shapes. In addition, a Web site, at fitlogic.net, slated to be relaunched at the end of October, will offer a tape measure women can print out to help them determine which body shape would provide the best fit.

A media plan to buttress the outreach to shoppers at stores will probably be launched next spring, projected Neil Kraft, president of Kraftworks, which has been developing Fit Logic’s branding and marketing program. Kraft described the brand’s motif as “feminine and soft,” highlighted by mauve and white hues and curves in the logo and label designs.

Although MMG took on the consulting role because it believes in the fit method’s business model, Feller noted some hurdles yet to be surmounted for the system to gain favor with women: its incorporation into more brands with broad appeal; the accurate execution of the fit models by apparel manufacturers, and the education of shoppers at the stores.