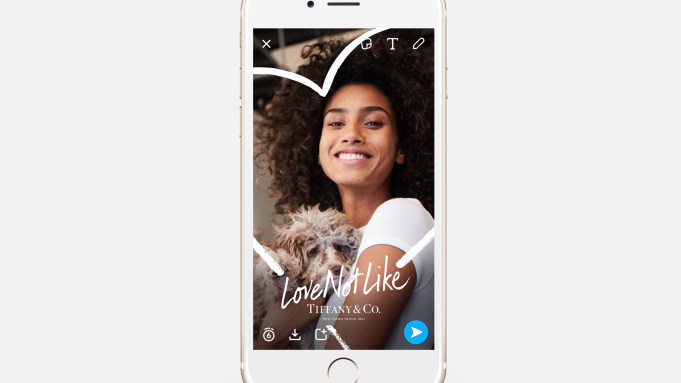 Diamonds might be a girl’s best friend — unless you count her Snapchat followers.

Today, Tiffany & Co. becomes the first luxury retailer to sponsor a Snapchat lens. For 24 hours, Snapchat users in the U.S. and Australia (and on Friday in Italy) will be able to interact with and share images and videos using a custom, Tiffany-created filter that features Tiffany’s blue and white hearts.

It’s clearly a forward-thinking move for the 179-year-old company.

The lens is part of Tiffany’s #LoveNotLike campaign, a marketing effort that will largely play out on social media, said Diana Hong, digital marketing vice president. The campaign promotes new designs from the Return to Tiffany Love collection, which was introduced this May and features the Tiffany heart tag.

In addition to the Snapchat lens, Tiffany will have a sponsored geofilter in all 93 of its U.S. doors through Aug. 31 that allows shoppers at the stores to access a special filter. The brand will also have its ads featured on the app.

Given that the #LoveNotLike campaign tag line is a social media-friendly hashtag, the campaign also appears globally on Tiffany’s social media channels, including Instagram, Twitter and Facebook, in addition to its web site and in digital and print advertising.

The brand tapped Cass Bird to photograph three models to speak to the younger Millennials and Gen Z fans who the collection is designed to attract: 19-year-old Imaan Hammam, who is from Holland but is of Moroccan and Egyptian descent; 20-year-old, pink-haired Australian Fernanda Ly, who is of Chinese decent, and 18-year-old Pyper America Smith, a Utah native who plays in a family band with her model siblings, including her brother Lucky Blue Smith. Combined, the three have more than one million Instagram followers.

Hong conceded that the models and approach might be somewhat unorthodox for Tiffany, but that it would be more likely to resonate, for example, with a 16-year-old girl. “We wanted to make sure the tone felt authentic,” she said. “What’s interesting about the world today is that we have moved on from the information age to the experience age and that has a lot to do with Snapchat.”

“It’s interesting to inject another dimension, and a balance between something polished and very raw,” said Hong, who noted Tiffany also had a presence on most other major global platforms, including Pinterest, Google+ and Chinese platforms. “It allows us to open a door to our world that our audience has never seen — for an audience who wants to see a bit more beyond just in front of the curtain.”

Although Tiffany & Co. is the first luxury retailer to sponsor a lens on Snapchat, earlier this month, both Urban Decay and Benefit Cosmetics bought sponsored overlays. Hollister, Michael Kors and Nike have also bought the use of Snapchat lenses in the past.

Snapchat introduced its advertising business last year, and reports that its users interact with a sponsored lens for 20 seconds on average. It has not shared publicly how much advertising costs, but research firm L2 estimates that a 24-hour lens can cost up to $700,000. Other advertising options include Snap Ads in a Live Story from an event (estimated to cost up to $500,000); and appearing in a Discovery channel ad or sponsoring a geofilter, which can target a specific location (such as a retail store), a major event (the Olympics) or a type of place (like every mall in America).

Snapchat doesn’t provide the type of in-depth metrics familiar to Instagram and Facebook users, but since introducing its advertiser business, the platform has added 10 new measurement partnerships with companies such as Moal, Oracle Data Cloud and Nielson mobile Digital Ad Ratings, as well as targeting capabilities that zero in on age, gender, location, type of operating system, carrier and content affinity.

Tiffany & Co.’s been working to update its business and has been renovating stores, working on in-store training and introducing new designs with multiple price points. To that end, Mark Aaron, vice president of investor relations, said in May that while Tiffany had seen lower overall unit volumes in fashion silver jewelry in some regions, “We are pleased with the initial reaction to new silver jewelry pieces that have been added to the Return to Tiffany and Infinity collections to address softness at price points under $500.”

A pair of sterling silver Return to Tiffany Love earrings sell for $300, while a rose gold heart pendant with diamonds are priced at $2,600. An 18-karat rose gold hinged cuff sells at $12,500.

Tiffany chief executive officer Frederic Cumenal in May discussed the balance between history and modernization.

“We pine for what is lasting and finding meaning not in what changes, but in what doesn’t,” he said. The ceo added that the relationship between luxury and technology was a “symbiosis.” “We cannot rest on the pillar of our heritage — Tiffany is always reaching around the next corner.”

As Hong puts it, although this might be a first for Tiffany and for Snapchat, “the brand has been around since 1837, so it has been relevant for quite some time.”