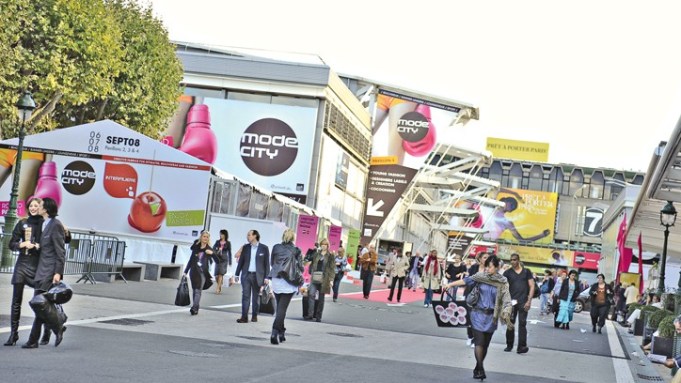 Visitor numbers may have fallen by as much as a third during the recent Paris trade shows, but organizers are seeing opportunity in the crisis, experimenting with two new fairs this coming season.

WSN Developpement, which runs Who’s Next, will unveil a new concept for 150 brands called Under Le Louvre from June 26 to 28 at the Carrousel du Louvre. Prêt à Porter, meanwhile, which runs concurrently with Who’s Next in September, will open a new salon called Before By July from July 5 to 7 at the Docks de Paris.

“Trade shows are more difficult and every sector is affected,” said Jean- Pierre Mocho, president of Prêt à Porter. “Consumption is difficult. It’s the time to take risks, even if we fail.”

Rather than lower prices for show space, the new events aim to help the industry get a head start on spring buying.

Billed as a festival, an advertising agency and a trade show, WSN intends also to establish cobrandings between fashion labels and the worlds of music and cinema, pairing, for example, a hip Japanese band with a French jewelry brand. The aim is to help brands better communicate such stories as sustainable development. The women’s wear lineup includes Didier Ludot, Leaf and Naco Paris; men’s wear includes Edwin, Timberland and Nu Jeans, and accessories brands include Azzaro. Levi’s and agnès b. may join the list as well.

“Fashion magazines on the whole have been an instrument of the major fashion groups: They only show designs by their advertisers, in 90 percent of cases,” claimed Xavier Clergerie, general manager of WSN Developpement, in explaining the move. “This is to help brands communicate differently.”

While Clergerie acknowledged that increasingly cautious retailers are ordering later, for designers who create their own fabrics or their own prints, June is a preferable date to September. “People who follow fashion can deliver at the last minute, creativity needs longer,” he said, noting that designer showrooms increasingly open in June.

“The Prêt à Porter September edition is the last major salon to take place in the world,” said Mocho, who forecast a long-term trend toward earlier ordering. He predicts that within two to three years, the major trade shows will have moved to July.

However, other shows didn’t follow the lead of Before By July, as was hoped, in bringing their shows forward, and take-up by brands has so far been slow. Though there’s a capacity for 150 labels, just 60 had signed up by early May. While the show is intended to offer a head start on buying, firms are allowed to bring fall-winter collections, allowing retailers who’ve reined in spending too zealously to restock, Mocho said.

Indeed, with orders down between 10 and 20 percent on average during January’s Prêt à Porter edition, and a similar story at Who’s Next, Mocho predicted some retailers could find themselves short of stock after stronger than expected sales in France in April.

Acting on feedback from visitors, meanwhile, for September, Prêt à Porter will be simplified, with the number of areas trimmed to seven from 10 previously, with accessories separated, not mixed as they were before.

Accessories fair Premiere Classe, meanwhile, will increase its footwear offer to some 150 brands, while September’s Who’s Next will include a showcase on denim. “The jeans sector goes up and down but it never disappears,” said Clergerie.

With a brand new salon in Dubai in October, Who’s Next aims to raise its profile in the Middle East and open up the region to new brands. “We need to get closer to consumers and distribution networks. Not everyone can come to Paris, the U.S. or Japan,” he said, adding there’s demand in the region for lesser-known labels. “They’ve already had the luxury brands and consumers are now realizing they can’t all have the same Louis Vuitton or Dior bag. They want something different,” he said.

Organizers of Denim Première Vision, meanwhile, said the show’s fourth edition, to be held from June 3 to 4, has registered an 11 percent uptick in exhibitors, which counted 68 companies from 12 countries signed up at press time.

Boutique show Tranoï Homme is likewise oversubscribed. “We’re going to be even more selective, go higher end. Our customer wants the best,” said show organizer Micheal Hadida, adding a men’s version of its Tranoï magazine will be published for the first time to coincide with the show.