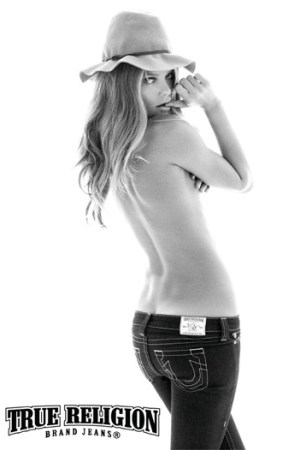 True Religion Apparel Inc. is looking to up its glam quotient and showcase the label’s growing assortment of sportswear when it unveils its latest advertising campaign this spring.

In a first for the Vernon, Calif.-based company, it has doubled up on the high-wattage-model front to feature both sexes. Sports Illustrated Swimsuit Issue regular Tori Praver and men’s fashion face Gabriel Aubry appear together in a black-and-white campaign shot by Nino Muñoz at Milk Studios in Los Angeles.

Jeff Lubell, chairman and chief executive officer, believes the campaign will make a statement about the brand’s progression from a strictly hippie-inspired aesthetic to a more refined and upscale look.

“It is a lot more glam, more glitz, but not moving away too far from our roots,” said Lubell.

According to Lubell, Praver and Aubry have a look that bridges the brand’s original Western carefree image with the more refined direction it’s currently taking.

“They both had that hippie, bohemian-chic look that I look for in choosing high-fashion models,” he said. “At the same time, they also gave me the glamorous side of the business.”

A key aspect of the new campaign will be to draw attention to the company’s nondenim offerings. Achieving a better balance between denim and sportswear has been a management goal for several years and is seen as a key driver of the company’s growth, and Lubell believes the effort is gaining momentum.

“We have a more glamorous type of sportswear product evolving into our collections as we try to attain a 50-50 mix from denim to nondenim,” said Lubell.

“Through the third quarter, our mix in our own stores is 74 percent denim and 26 percent nondenim,” said Lubell. “So we’re at a 26 percentage already, and it’s now growing toward the 45 to 50 percent mark.”

Lubell said the company has made significant progress expanding its product assortment over the last year. During last year’s campaign shoot featuring Gisele Bündchen, Lubell said the stylist brought other items to the shoot for her to wear. Those items, like a leather vest, turned out to be in demand and drove home in Lubell’s mind the necessity for True Religion to meet those desires.

“The response from the retailers and consumers was, ‘Where can I get that?’ ” he said.

The company’s push into sportswear has also come at an opportune time, according to Lubell. Retailers sought to weather the downturn by eliminating inventories, winnowing product assortments and generally playing it safe on styles. Many were also forced to lower their average price points, and are now looking to make up that difference in volume.

“[Retailers] are feeling the impact of their lean inventory and recessionary price structures,” he said.

Lubell believes retailers are now hungry for the next trendsetting product, but, given continued weakness in consumer spending and the weakness of the U.S. dollar, don’t have the ability to pay the premium for imported product. True Religion’s sportswear, however, is manufactured domestically.

“It’s very hard for retailers today to buy what they want,” he said. “It becomes too expensive to import into the U.S. We saw an opportunity to manufacture Italian-type product domestically and to be at an affordable price.”

Lubell did not disclose the cost of the campaign, but the company has increasingly committed more resources to advertising and marketing to support a frenzy of branded store openings over the last several years. According to the company’s annual filing with the Securities and Exchange Commission for 2008, the label spent $2.1 million on its spring and fall print campaigns in the U.S. For the full year, advertising costs came in at $3.9 million. In comparison, the company spent only $1.2 million on advertising in 2007.

Results for the third quarter, which ended Sept. 30, showed the company to be on solid footing as it heads into the end of the year and the spring season. Earnings for the first nine months of the year improved 3.3 percent to $32.7 million, or $1.35 a share, compared with earnings of $31.7 million, or $1.31 a share, in the same period a year ago. Sales rose 10.7 percent to $218.2 million from $197 million, prompting management to up its guidance for the year and target sales of between $295 million and $300 million for the year.

The greatest opportunity for expanding the sportswear offer likely exists in the company’s own store environments. True Religion’s direct-to-consumer segment has been fueling the company’s fortunes while it grapples with sharply declining sales to department and boutique stores. During the third quarter, branded store and online sales spiked 51.9 percent to $32.6 million, compared with $21.5 million a year ago. The pace of store openings is likely to help move the denim-to-nondenim needle rapidly. An additional seven branded stores were opened during the quarter for a total of 66, compared with 36 last year. Management anticipates having 70 stores by the end of the year.

The branded store environment allows the company to fetch higher prices on its goods. For example, the average selling price for women’s jeans was $253 for the quarter, while men’s came in at $273, representing a double-digit increase for both.