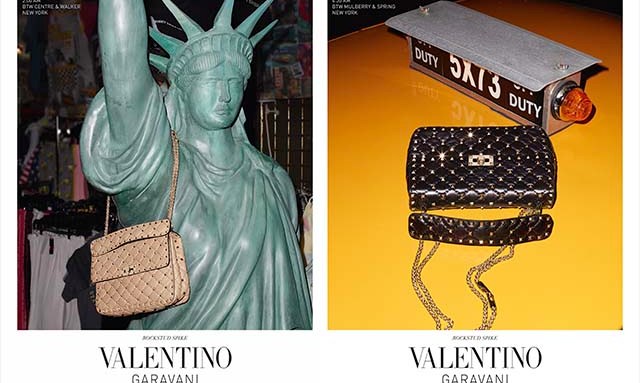 MILAN — Pierpaolo Piccioli is beginning to make his mark on Valentino as the luxury brand’s sole creative director. The designer, who was appointed to the role in July after Maria Grazia Chiuri’s exit and move to Dior, is launching the label’s new Rockstud Spike Bag and has set in motion a strong communication campaign, revealing the brand’s first steps under his lead.

Piccioli has turned once again to Terry Richardson, but has added a more “street” mood to the campaign. Together with the photographer, the designer cruised lower Manhattan at the end of a “boiling hot” July in a street casting effort, so that each woman would wear the bag her own way.

“It is not the accessory that defines the persona, but it is the object that allows the persona to express one’s character, attitude and diversity,” Piccioli told WWD.

Small studs enrich the quilted tote with an almost “punk dotting,” Piccioli said, and the handle is placed between the shoulder strap and the body of the bag as an adaptable piece that can be personalized. The campaign has a point of reference: the photographic project “Humans of New York,” founded by Brandon Stanton. Piccioli said he wanted to capture and emphasize the “rich diversity of people on the street, without filters, and the value of being unique, celebrated by the Rockstud Spike without any distinction of gender, race, culture or social belonging.” Extreme personalization and the celebration of individualism are at the core of the campaign.

Piccioli said he wanted to underscore the customization of a shape that is “well-known, almost a grandmother’s bag. Studs are a punk symbol on a bourgeois object.”

Richardson also directed a series of viral videos, which will go live on social media together with the ads, breaking on Thursday.

The subjects appearing in the videos all carry a Rockstud Spike Bag in a personal way and speak of their favorite color or are asked to describe New York in three words, reflecting the city’s diverse population. New York was the “city chosen as a universal symbol of a society where diversity and uniqueness remain the fundamental requirement of contemporary times,” the designer said.

The campaign reflects “a historical moment. We live with different cultures,” he said, observing that “authenticity was key, to create a sort of travel diary to better understand people. Stanton’s site is interesting, it tells the stories of people. Here, the idea is that of telling a story of individuals through an object and how the object changes through people because they add life to the object. The bag adapts to the look. We should cultivate the idea of difference, and I did not want to create a postcard. This is what they see daily, through their eyes, so the project is more about an experience.”

Piccioli underscored that, in the videos, the individuals do not discuss the bags but talk about themselves and the accessory “becomes part of their personality. Fashion should discuss the value of being unique.”

In previous advertising images for Valentino, Richardson’s tattooed arms featured prominent], and this, Piccioli said, “added a strong rock touch” to the brand. The campaign changes this season, becoming “more street…showing new ways of contemporary expression. Social is a great medium, depending on the quality of the content and there must not be a generic approach,” he said.

Piccioli wanted the videos to be live recorded, without any digital retouching for a “more interesting quality. It’s more narrative and less advertising.”

The designer walked away with the feeling that “you can’t create the characters that actually exist in reality, such as a boy wearing samurai sandals under rapper pants.” He also wanted to inject life in the still images, so there is no pre-lighting and the bag is pictured in everyday street contexts.

The black version is in leather with ruthenium hardware. The red, hazelnut and ivory versions in napa show platinum hardware.

The brand’s first runway show with Piccioli solely at the design helm will be held on Oct. 2 at the Hôtel Salomon de Rothschild in Paris.