Versace Shows a Different Side

The visuals for house's fall collections, slated to break in August issues of lifestyle and fashion books, represent a major shift from previous campaigns. 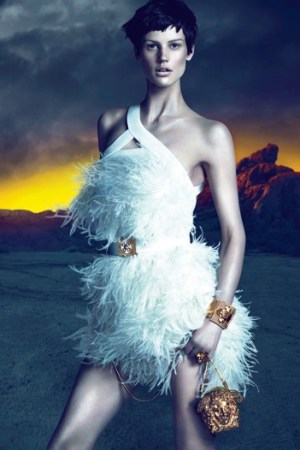 When Donatella Versace brought her fashion shows back to Via Gesù starting with men’s last year, it was a homecoming for the designer in more ways than one.

It’s where her brother Gianni used to present his collections, and the women’s show last February picked up on many of the baroque themes that he made iconic to the house. With so many symbolic statements, it was only a natural that she also wanted to shift gears with the campaign to accompany these collections, and the new visuals, slated to break in August issues of major lifestyle and fashion books, represent a major shift from previous campaigns.

In a Versace first, Mert Alas and Marcus Piggott were tapped to shoot the campaign, and rather than the of-the-moment celebrity or platinum blonde so synonymous with the house, Versace worked with brunette model Saskia de Brauw and Sean O’pry as her male counterpart. Versace explained that the casting harkens back to various moments in Versace’s heritage.

“For me, it is expected to have the blonde girl, the sexy girl, and this is what Versace meant recently,” Donatella Versace told WWD on Thursday, during a fitting for the spring 2012 men’s show, scheduled for Monday. “But I thought about how in the past, when Gianni used girls like Kristen McMenamy and Stella Tennant, everyone was always saying, ‘Wow, this is not a Versace girl, she is not blonde.’ Sometimes you need to renew yourself to work better and to make a little bit of a push.”

The campaign, which Alas and Piggott photographed in London last April, was art directed by Giovanni Bianco, who has worked extensively with Steven Klein for Italian Vogue as well as with Madonna. Joe McKenna served as the stylist. “It’s a glamorous woman and it’s a little pop, which I love,” Versace said of the resulting images. “Mert and Marcus are very talented and full of ideas.

“This season is just the beginning,” she added. “I want to push something different and new.”

Mario Testino, who had shot the fashion campaigns from 2004 through last season, will continue to photograph the brand’s fragrance campaigns.

The new ad direction is also emblematic of a new era at the house, led on the business end by chief executive officer Gian Giacomo Ferraris. Versace explained that the new campaign was another facet of this. “It’s a very good moment right now,” she said.