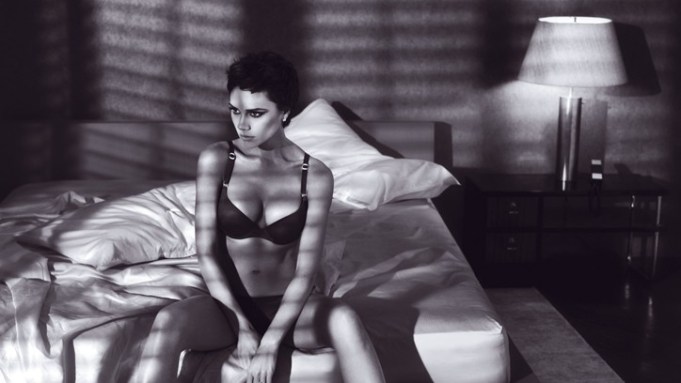 Both campaigns will break in February titles. The Emporio shots will also appear on billboards from New York to Tokyo, via Rome, London and Paris.

The ex-Spice Girl displays her trim body in sultry black and white images with a retro lighting but modern feel.

Lounging on a carpeted floor or sitting on a modern bed, Beckham dons bra and panties ensembles, one scalloped and polka dotted, the other a more basic version with a wide-strapped demi bra.

“Great underwear is alluring and provocative, so I wanted to work with someone who would make a real impression,” said Giorgio Armani.

Enveloped by saturated and sun-drenched hues reminiscent of Grecian sunsets, Alas and Piggott snapped Holmes against a Fellini-esque set built with graphic partitions that overlook orange-tinted water and sky.