By Marc Karimzadeh on May 7, 2009
View Slideshow 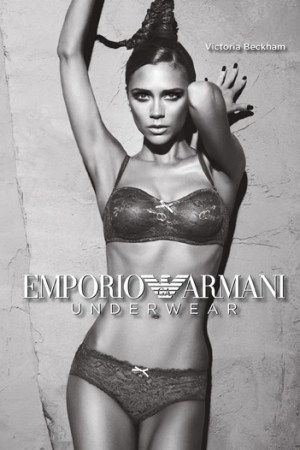 NEW YORK — What happens when one of the world’s best-known women comes to the world’s largest department store?

If it’s Victoria Beckham and the venue is Macy’s, it can cause a frenzy. On Wednesday, Beckham made a pit stop at Herald Square to unveil the first image of the new Emporio Armani Underwear campaign.

Wearing a tailored black tuxedo jacket with jet-beaded shoulders and Swarovski crystal-beaded leggings from Emporio Armani, Beckham’s arrival drew a crowd of more than several hundred. Those who didn’t get too close certainly couldn’t miss the 20-foot banner with the photo of her, which she unveiled with Macy’s Inc.’s chairman and chief executive officer Terry Lundgren. The unveiling sent shoppers and paparazzi into overdrive.

“It was amazing,” Beckham said. “For me, the collaboration with Armani is so exciting, and to be here at Macy’s and have so many people turn up is great.”

The campaign was shot by Mert Alas and Marcus Piggott in Milan, where the former Spice Girl’s husband, David, is playing soccer for AC Milan.

“Mert and Marcus are such amazing photographers, and we pushed it a little with this picture,” Beckham said. “We really experimented with different hair and different makeup, which is what I like to do. I really like to change it up.”

This is the second Emporio Armani Underwear campaign Beckham has appeared in. “It came out of a genuine friendship Mr. Armani has with both of them,” said John Hooks, deputy managing director of Giorgio Armani SpA.

Beckham struck a pose for photographers with her back against the photo, before making her way to the store’s women’s intimates department on the sixth floor. There, she met with fans and posed for more pictures.

After her whirlwind tour of New York, which included attending the Costume Institute benefit on Monday, Beckham will head to London to work on her own collection, then stop in Milan to see her husband before returning to her current home base in Los Angeles. “I have to time it, depending on where my mum is and where David’s mum is, so they can help out with the boys,” the mother of three said.

At Macy’s, Beckham admitted she didn’t actually turn around to peek at the giant banner during the unveiling. “It probably would have freaked me out a bit,” she said. “I don’t often do photo shoots like this. This is something a little bit different. It’s great that when I am 60 years old with however many children, I am lucky enough to have by then, I can say, ‘Well, I looked good.’”