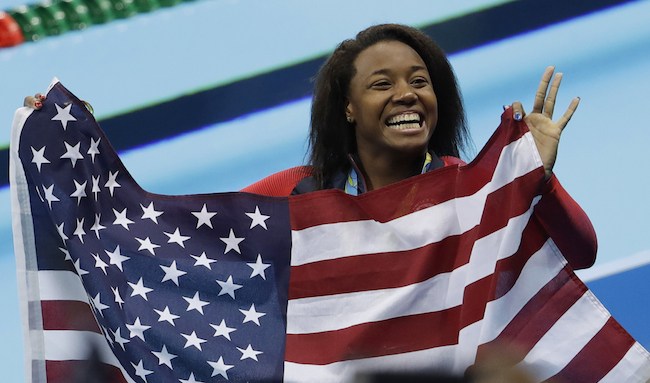 Every four years, the Olympics herald a major opportunity for competing athletes: the glory of victory, the agony of defeat and the promise of payday.

Along with millions of people around the world, marketers are tracking the performances at the Summer Games in Rio de Janeiro to see who could shine as a spokesmodel. Fashion and beauty executives are no exception.

“I really see opportunity there,” said Vinny Nesi, senior vice president of Iconix Brand Group’s men’s fashion division, who also works on its athletic brands, including Starter and Umbro. Some of the athletes he’s keeping an eye on are American beach volleyball players Kerri Walsh Jennings and April Ross (who settled for the bronze in Rio). “I very much think the U.S. female athletes are role models,” he said.

Fashion brands’ interest in this year’s Summer Games could be growing due to the strengthening link between sports and the apparel industry, particularly with the seemingly endless growth of activewear.

Aéropostale appeared to have received the marketing memo early. The teen clothing retailer unveiled its back-to-school denim campaign featuring London gold medalist Aly Raisman in June, a month before the 22-year-old was named a returning member of the U.S women’s gymnastics team.

Completing a floor workout in Aéropostale’s stretchy jeans, Raisman is the latest Olympian to cross into fashion. Seven years ago, Nastia Liukin soared in an ad campaign for BCBG Max Azria after taking home the best all-around gymnast gold at the 2008 Summer Games in Beijing. Fresh off his athletic accomplishments in London in 2012, swimmer (and current Rio-robbery-mystery-man) Ryan Lochte ended up in a Calvin Klein campaign as well as in his own reality TV show.

Moreover, a gold medal isn’t always a prerequisite accessory. A bronze medal in diving at the London Games helped Britain’s Tom Daley to try his hand at modeling for Adidas’ youth-oriented Neo label.

“Coming out of the Olympics, if you’re hugely successful as an athlete, you become a celebrity brand,” said Daniel Durbin, director of USC Annenberg Institute of Sports, Media and Society. “That gives you a value to marketers — especially fashion marketers — as an athletic, exciting, accomplished, heroic kind of brand.”

Even with a gold medal, Olympians could be a bargain compared to other professional athletes. Take LeBron James, who jumped into the NBA straight out of high school in 2003, and has more than lived up to the hype. “He commands a huge amount of money for his services and merchandising as most athletes who have been on the stage for any time do,” Durbin said. Indeed, in Forbes’ 2016 rankings of the 100 highest-paid celebrities, James’ $77 million in earnings and endorsements qualified him for the 11th spot, ahead of Madonna and Roger Federer.

Life out of the arena isn’t always easy. Ronda Rousey can attest to that. The day after she stepped off the podium with her bronze medal in judo at the Beijing Games, “I had a full-on anxiety attack because I was like, ‘What am I going to do with my life?'” she recalled. “As soon as it’s over, it’s like, OK, life did not end. It’s happy but it’s not a happy ending. It’s a happy moment. The ending is still far away and you have to find something else to fill the rest of the story.”

Rousey managed to fill the next eight years by metamorphisizing into an Ultimate Fighting Championship star, an actress in movies such as “Entourage” and a denim model for Buffalo David Bitton. It’s no surprise that the 29-year-old’s successful career has been mentioned as a template for other female athletes in Rio.

“I’m happy to play that role if I can,” Rousey said. “It’s good to have examples of people who have made a career for themselves afterward with the skills that they learned at the Olympics.” After all, she’s aware that even the fittest are susceptible to what she dubbed post-Olympic depression. “You have to go back to the real world and you realize that you have no work experience because you’ve been training your whole life, you don’t have much of an education because you’ve been training your whole life, and there isn’t a single employer out there that cares that you have an Olympic medal.”

Olympians must capitalize on their value quickly. Andy Hohl, talent brand manager at Artist & Brand Management in Los Angeles, repeated a saying uttered by Jordyn Wieber, a member of the U.S. women’s gymnastics team that garnered gold in London: Olympic athletes have two years to make as much money as they can. He expected the “Final Five” gymnasts from the Rio Games to see deals that are valued at six and seven figures.

Speculation is mounting about which beauty brand will nab U.S. gold medal winner Simone Biles, complete with her glittery eyeshadow, as a spokeswoman. Some in the beauty industry predict that Procter & Gamble’s Cover Girl will score an affiliation with her. During the broadcast which showed the 19-year-old as the best female gymnast in the world, Tide and Hershey’s aired commercials highlighting her all-American appeal. Her grandparents attested to her being a typical American teenager. “She loves girly stuff,” Nellie Biles said in a short NBC biography introducing her granddaughter on prime-time TV. “She loves to shop and she loves to get her nails done, her hair done. She loves to feel pretty.”

An analyst speaking to The Houston Chronicle estimated that Biles could reel in more than $3 million in endorsements in the coming months. But the biggest windfall for her, and for her fellow Olympic athletes, could happen when brands rev up for the 2020 Summer Games in Tokyo.

“We will see [Biles] come back in four years and compete again, and she will be one of the go-to athletes for commercials in 2020,” said Bob Williams, chief executive officer of Evanston, Ill.-based Burns Entertainment & Sports Marketing. He continued, “Advertisers are being proactive prior to the games and, now, it is about setting up for four years from now and who may be on the list for the next Summer Games.”

Plus, Williams singled out 17-year-old hurdler Sydney McLaughlin as an athlete on the rise who could be attractive to beauty brands in the future. The high school senior walked the red carpet at this year’s ESPY Awards, and recognition as Gatorade’s Female Athlete of the Year included bottles of the popular energy drink plastered with her photogenic profile. “She’s likely to be back in four years and has the kind of face that a beauty company would be very interested in,” he said.

Hohl, who works with pro athletes Gabrielle Reece and Laird Hamilton, has his own list of American athletes to watch but he looks up to Biles. “You can’t really knock her down at all,” he said. “She’s a genuine person and has a bubbliness. It appeals to the masses.”

As for mutiple-gold-winning swimmer Katie Ledecky, “I definitely think she’s going to pop after this Olympics,” he said. Even Pita Taufatofua, who is best-known as Tonga’s oiled-up, shirt-off flag bearer during the opening ceremony, could ink a deal. “It’ll probably be on the cheesier side of things than a prestigious commercial,” he said.

Simone Manuel, who made history as the first African-American woman to win an individual swimming event at the Olympics, “could be the surprise star of these Olympic games,” he said. “Her personality is relatable to the public and brands will for sure be looking to partner with her.”

Having a winning personality is vital. A cautionary tale is Lochte, who finally became a breakout during the London Olympics, despite his previous wins in Athens and Beijing. Then his prospects out of the water fizzled. “You can have everything but if your personality isn’t there, people aren’t going to connect with you,” Hohl said.

A unique personal style is another way to connect through a small screen with an audience. Plenty of athletes have displayed their own twists on beauty. Michelle Carter, the first U.S. woman to capture a gold medal for shot put and founder of the makeup brand Shot Diva, sported red lips during her event and subsequent award ceremony, while swimmers including Dana Vollmer and Allison Schmitt have worn elaborately painted patriotic nails. Laurie Hernandez and the rest of the gymnastics squad have tumbled in sparkle-rimmed eyes, colored pouts, taut buns and high ponytails.

Rather than shy away from makeup, many athletes proudly use it and seek deals with beauty brands. For instance, Sweat Cosmetics works with Olympic sprinter Natasha Hastings, who dons blond hair, dark eyeliner and bright lips while running.

“Times are changing, and each Olympics we watch we see more and more athletes embrace their beauty and want to represent these beauty and cosmetic brands that they wear on a daily basis,” said Sweat Cosmetics chief marketing officer Leslie Osborne, a former professional soccer player and defensive midfielder on the U.S. women’s national soccer team.

For beauty brands, vibrant looks on commanding athletes encapsulate inspiring messages they want to convey. “I love watching all of these fearless, confident and athletic women competing this year,” Osborne said. “I love even more that they are able to rock their own self-expression, whether it’s their lipstick, sparkly eye shadow, bronzer or mascara. It’s empowering to see women be bold, beautiful and win gold medals.”

When the flame of the Summer Games’ torch is finally extinguished, the athletes don’t have to fall into a funk. They can heed Rousey’s advice as they vie for an endorsement. “Don’t be afraid to suck at something for a little while,” she said. “It’s worth the effort to start over and make a life after for yourself.”