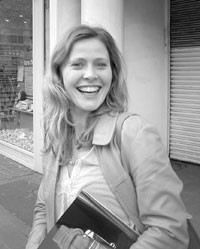 Indeed, it takes more than a hawkish American president — or a like-minded British prime minister — to change the way British consumers, ages 18 to 40 years old or so, view fashion brands, let alone alter their buying habits.

Random interviews last week with more than a dozen adults in a handful of London neighborhoods (see right) showed the policies of President George Bush and Prime Minister Tony Blair, with regard to Afghanistan, Iraq and the war on terror, rarely enter the mind of a shopper who’s eyeing, say, a cropped Gap jacket or a pair of French Connection flip-flops.

Holding far more sway over fashion choices, they said, were influences such as the good deals afforded by the weak dollar and, not surprisingly, style itself.

At least one Londoner canvassed, Gemma Coles, recently made a shopping trip to the U.S. to capitalize on the exchange rate between the pound and the dollar. “I went to New York last month to take advantage of the weak dollar,” Coles said in an interview on Regent Street. “The shopping was great. Gap is cheap here, but in the States it’s so much cheaper. I bought jeans while I was there.

“I certainly haven’t cared about the Bush connection, but now you’ve got me thinking,” Coles added.

Another Regent Street pedestrian claimed politics didn’t affect her fashion sensibility, which varied in its receptivity to American brands. “I wouldn’t buy Gap anyway, or Ralph Lauren, but I’m not going to stop buying Calvin Klein underwear because of Bush,” Nazreen Farmen said. “I went to the antiwar marches, so I’ve done my bit,” Farmen reasoned.

For Sally Stillman, who was strolling through Covent Garden, “If you’ve got a problem with Bush, there are better ways to voice it. I don’t think [politics] has influenced my buying U.S. or non-U.S. labels. I think you’d be misguided to go down that route.”

In fact, more than three-quarters of the consumers interviewed in London shopping districts had made up their minds long ago about which fashion brands they do — and do not — buy. About four out of five said they hadn’t changed their fashion purchasing patterns because of U.S. or British government policies. Observed Gail McKinnon, a clerical worker strolling on Regent Street: “I’m more into Japanese labels. I don’t really buy from any of the big [American and British] brands anyway.”

The person-in-the-street interviews conducted by WWD support the findings of a survey by Chicago-based Edelman Public Relations Worldwide, as reported last month. That study, done in June 2003, found college-educated, business-savvy Europeans with annual incomes of $75,000 and up are unlikely to reject U.S. and U.K. fashion brands, particularly luxury labels, because of negative feelings toward the Bush and Blair administrations.

Similarly, an online poll conducted by Harris Interactive Europe, between Feb. 27 and March 4, showed adults in Great Britain, Spain, France, Germany and Italy generally separated their perceptions of American politics and pop culture. Whereas 70 percent of the respondents held negative opinions of President Bush and U.S. foreign policy, only 13 percent had a negative take on Americans. When it came to pop culture, 48 percent expressed a positive view of U.S. films and TV, for instance.

In its random poll last week, WWD found Londoners were more likely to take out antipathy toward Bush and Blair on mass-market brands in other categories, from Coca-Cola to Cadbury, much as consumers in France and Germany indicated in the Edelman study last summer.

But some, like Suzanne Davies, are more politically sensitive in their fashion choices. “I haven’t been into a Gap for a long time, maybe subconsciously,” she said last week in Covent Garden, noting she perceives ads for American brands, from Gap to Calvin Klein, as perpetuating the American Dream.

“I don’t think that washes with anyone anymore,” Davies asserted. “I wouldn’t buy anything that was an obvious U.S. brand — well, probably wouldn’t anyway.” Still, she acknowledged, “That doesn’t mean I go into Selfridges and look at the labels to check that things aren’t made in the U.S.”

If fashion purchasing patterns appear to be little affected by Bush and Blair war policies, however, it seems the styles people are donning daily have changed — for some, at least. “We haven’t seen Kate Moss wearing her Union Jack jumper for a while, have we?” Davies said. “Anything with a flag is pretty dangerous these days, like all the Fake London stuff, British Bulldog, Duffer of St. George.” (All of those labels, at one time or another, included styles that proudly sported the British flag and other British icons, like the bulldog or the Queen’s image.)

“People are veering away from any clothing with a vaguely British patriotic slant to it these days, whereas before the Iraq war it was all Cool Britannia,” Davies added. “Most young people these days seem to feel that Blair has left them with very little to feel proud of.”

— With contributions from Ellen Burney and Nina Jones