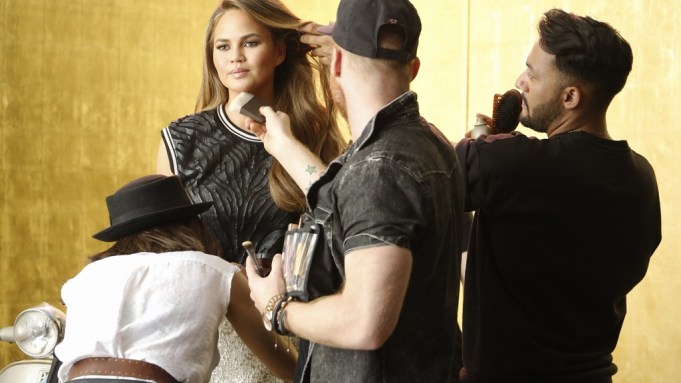 Chrissy Teigen, who made a name for herself as a Sports Illustrated swimsuit model, is the new face of XOXO’s fall ad campaign.

“It’s great to be able to do a brand that you’ve known for so long. When you think of Sports Illustrated, the first word that comes to mind is ‘iconic,’ and when you think of XOXO, that’s pretty iconic, too,” said Teigen, on the set of her ad campaign shoot in Manhattan Friday.

The 28-year-old model recalled earlier XOXO ads featuring Christy Turlington and Tyra Banks, as well as last year’s model, Lily Aldridge. “Obviously the brand has evolved, but it’s still so recognizable as an XOXO campaign. Growing up it was exactly my style. It was sexy and it was flirty and there was something cheeky about it,” said Teigen, who is married to singer John Legend, who dropped by the shoot with Champagne and their French bulldog, Pippa.

Over the years, Teigen has done campaigns for such brands as Billabong and Rock & Republic, but her big break came when she started modeling swimsuits for SI. Teigen became an SI swimsuit model when Brooklyn Decker and Andy Roddick came backstage at one of Legend’s shows to say hello. “They knocked on the door of the trailer and I immediately connected with Brooklyn, and John connected with Andy, and we decided we had to double date,” she said. A few weeks later, someone e-mailed her from SI and said Decker referred her. At the time, Teigen was with a smaller agency doing “catalogue-type stuff where you wouldn’t even see my face. To get Sports Illustrated after that kind of stuff is pretty crazy,” she said.
During the XOXO photo shoot — which was done by Cathrine Westergaard at Milk Studios — Teigen wore several of the brand’s outfits and accessories, ranging from a floral dress to gold shorts and a black top. Ads will break in August in print, digital, Taxi TV and in-store, and the fall budget is flat to a year ago, with a slightly larger investment in digital.

Asked if she considers herself a role model for young women, Teigen said she believes she is. “Being in Sports Illustrated and a swimsuit model, it’s interesting because people assume that men love you and want to look at you and ogle you, but I’ve always had a strong female fan base and I’ve always really loved my girls. I’ve always felt like the oddball with the sexy models, because I never have thought of myself as sexy,” she said.

Teigen believes that magazines are doing a better job these days showing a diverse group of women. “You’re getting a nice mix. There are so many types of women in the world, and you don’t need to represent just one anymore. You can flip to any page in a magazine and odds are you’re going to see a different body type and that’s great,” she said. As for keeping her own shape, Teigen said it’s difficult for her to diet because “I love cooking and I love eating.” When she has a big shoot coming up, she tries to cut out carbs and does bar classes at Physique 57.

She said she’ll spend the summer planning a baby shower for her sister and touring with Legend. This past weekend, she attended the 2014 Billboard Music Awards, introducing her husband onstage. She also accompanied Legend to the University of Pennsylvania, where he received his second honorary doctorate and gave the commencement speech on Monday. They plan to take their vacation in the beginning of September to celebrate their first wedding anniversary, although they’ve been together for eight years. Teigen said she met Legend on a video shoot. “It was my one and only video. I was one of the only ones who would do it for free. He was in a suit and I was in lingerie. When you’re from meeting like that, it’s bound to happen,” she said. They married in Lake Como, Italy, and live in New York’s East Village.

Considering herself a fashionista, Teigen said she’s obsessed with online shopping. “I like shopping in stores but I refuse to try anything on, so I am, for the most part, an online shopper.” She said she’s hooked on Net-a-porter and likes Forward by Elyse Walker. As for her favorite designers, she said, “I love Rag & Bone, Helmut Lang, Alexander Wang. I’m a big fan of black, white, gray metallics. I’m not a big color person. I have hundreds of pairs of David Lerner leggings. They are my pants. I’m obsessed with shoes and bags. I have a stylist, Jessica Pasteur. She changed my world,” she said.

One of her biggest passions is cooking. “I read cookbooks, I bring them on my flights and tag them with Post-its. John doesn’t love to cook. He’s a good cook and will offer to make me meals, but I can’t have that going on without me helping him. I do it myself, or he’s kind of my sous-[chef]. I’ll go to bed after we have dinner and he’ll do the dishes. I don’t know how to tell him that no other husbands do that.”

As for new projects, Teigen has an MTV show coming up called “Snack Off,” which is a cooking competition with young people. “You can call me the ‘Padma of snack foods.’ Instead of working with lobster or risotto, they are using ingredients that young people would have in their kitchen. I am a judge,” she said. It starts this summer.

It’s also no secret that Teigen hopes to have a big family someday. “I’d love to have four children. I want to be able to look around 20 years from now and see everyone gathered around my table. That’s my dream,” she said.

But one place you’ll probably never find her is on the runway. “I wish. It would be kind of hysterical. I think I’m a little too short. I’m 5-8. That’s my excuse for never getting called for it.”