The robust atmosphere at the recent shows provided a spark of encouragement for the Italian apparel industry. 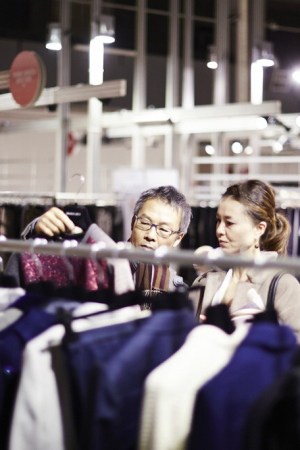 A view of the Super show.

For buyer Gabriella Corazza, who works for the multibrand boutique Anna in the southern Italian city of Matera, the Super and White shows offered appetizing styles to reel in customers.

“They provide eye-catchers,” Corazza said, explaining that she had found items to lure customers to the clothing brands the store carries like Cucinelli, Tory Burch, Diane von Furstenberg and Isabel Marant. “They’re like a spicy condiment to a healthy meal.”

After flat sales in 2012 and a 0.9 percent dip in 2013, total turnover for the Italian women’s wear sector was forecast to rise 2.1 percent in the first half of 2014, according to figures from Italian textile and clothing federation Sistema Moda Italia.

A boost in international buyers, especially from Asia — as well as a long-awaited return of Italian retailers — convinced fair organizers, however, that they are reaping returns from major efforts to revamp and renew their offerings since Italy’s economic crisis.

“We received lots of positive feedback during the three days of Super,” said Agostino Poletto, deputy general manager of fair organizer Pitti Immagine and director of Super, which was launched in February 2013 after Pitti Immagine shuttered three smaller fairs.

Billed as an event for research and talent scouting, Super offered 335 brands ranging from exclusive products to the commercially shrewd, from start-up labels to new collections from established names. Accessories comprised 60 percent of the show, which also carried capsule collections and rtw.

Elisabetta Paroli, head of development and marketing for Super, reported that buyers are dedicating more of their budgets to bijoux, bags, hats and heels, because assertive accessories have become the fundamental building block for creating a look on a backdrop of clothes.

“It is a phenomenon that has consolidated over the last five or six years,” Paroli said, “It’s no longer correct to call them ‘accessories.’”

Paroli praised the Jeffrey Campbell shoe label as a prime example of Super’s products offering high fashion content at low wholesale prices to allow higher-than-average markups, which she said usually hover at 2.5 to 2.8 times wholesale. She held up a towering platform heel ankle boot with a rubbery surface of black-and-white cascading drops that looked like melted candle wax.

Florentine hatmaker SuperDuper was among 15 emerging talents selected by Sara Maino from Vogue Talents for the “Super Talents” section.

“I truly see thousands of designers every year,” Maino said.

“Our sales have been doubling season by season,” he said, adding the start-up has now reached production of 4,000 units a year, nearly all sold abroad, including at Japanese retailers United Arrows, Tomorrowland and — beginning this season — Isetan.

Established French rtw maker Didier Parakian straddled White and MIPAP with stands at both fairs. He said 2013 turnover for his namesake label, whose top markets are Italy and France, fell 13 percent in a year to 20 million euros ($27.6 million). But losses in Europe were offset by his participation in a three-year-old Chinese joint venture with 35 monobrand stores that sold 15 million euros ($20.7 million) worth of product.

Parakian said he entered White this edition as part of an effort to raise the position of his brand, which introduced a couture line last year and opened a Paris showroom in Rue Saint-Honoré.

“New contacts are made there [at White]. Here [at MIPAP] orders are made,” said Parakian, summing up the difference between the fairs for his own business.

He said that for buyers, White “is not alternative” but “complementary,” servicing the “research” niche in the merchandising mix of fashion retailers.

Andrea Provvidenza credits White for spotting and supporting his LodenTal coat brand, helping it grow in a year-and-a-half from a 150-coat project to a rising young company with production of several thousand coats and placement in stores like United Arrows, Isetan and Barneys New York.

Provvidenza said rummaging in the cellar and finding his father’s old loden coats inspired his contemporary cuts and hues for Austria’s iconic water-resistant wool. Wholesale prices for his garments range from 300 to 600 euros ($415 to $825).

At this edition of White, 40-year-old textile maker Texpar launched its new button-front shirt line Made 4, featuring especially soft, enzyme-washed cotton and buttons made of galatite, a resinlike substance made from milk derivatives, providing a subtle shimmer. Made 4 shirts retail for 130 to 160 euros, assuming a markup of 2.8 to three times wholesale.

Siblings Chiara and Stefano Pariani, who took over the company from their father, said they hoped White would help them enter production for big brands.

Paola Lusvardi, head of sales and marketing for EAN 13, said she was happy to return to MIPAP after an absence of many years. Lusvardi described the brand’s style as “showy, comfortable and elegant” for women ages 35 to 40 and older. Printed T-shirts using metal studs and Swarovski crystal ranged from 60 to 150 euros wholesale, or $83 to $207.

“We found a lot of new Italian clients [at MIPAP],” Lusvardi said. “It was a nice surprise.”

A general manager for women’s wear at Isetan, Kenji Yamashita, said he saw “high quality” clothes for mature women at MIPAP, although they weren’t fashionable enough for his customers.

“We have to differentiate ourselves from White and Super,” Forlin said. “The segment that I want to represent is a classic, midrange product…for a contemporary woman who isn’t a fashion victim.”
She said the fair was 90 percent rtw, with very few accessories.

“This is more of a business fair,” Forlin said. “Many people here leave with orders in hand.”