The expected growth follows leadership changes at Nike and Under Armour.

Activewear is expected to see growth this year that will outpace the rest of apparel sales.

Regarding the latter trend, where consumers engage in outdoor activities such as hiking, kayaking, skiing, snowshoeing and orienteering, base layers that use Lyrca or similar textile innovations are key to warmth, flexibility and comfort. These same fabric qualities are also sought in running apparel, workout clothes and yoga wear as well as sports bras.

Footwear, performance running socks and headwear are also pegged to do well this holiday, with shoppers eyeing half-zip running tops and classic hoodies, and for women, running capris.

As a result, retail analysts see the activewear market wrapping up 2019 with a 6-to-7-percent year-over-year gain. The forecast is in contrast to holiday spending estimates that range from gains of 3 to 5 percent, and apparel-only holiday sales growing just 1.3 percent this season, according to Customer Growth Partners.

On the business side, the activewear segment has had its share of volatility. In one stunning day last week, both chief executives officers of Nike and Under Armour stepped down. Effective this coming January, Mark Parker will be replaced as ceo of Nike by John Donahoe, who is the current president and ceo of ServiceNow Inc. as well as chairman of PayPal Holdings. The move comes as Nike just wrapped up two years of technology investments aimed at improving its digital strategy. Parker will take on the role of executive chairman. 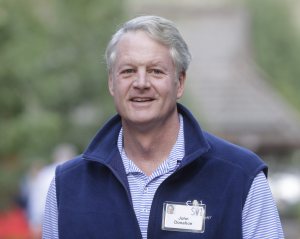 John Donahoe is set to take the reins at Nike.  Andrew Gombert/EPA/Shutterstock

At Under Armour, Kevin Plank is stepping down as the ceo — also in January, and will remain as executive chairman and “brand chief.” Under Amour president and chief operating officer Patrik Frisk is set to fill the ceo seat. The move follows some strategic hiccups at the company.

Under Armour had experienced a period of robust growth in 2015 and 2016 with total sales gaining 28 and 22 percent, respectively. But that rate of growth slowed in 2017 to 3.2 percent, according to data from S&P Capital IQ. In the 12-month period ended June 30, annual year-over-year revenue growth slowed to 1.8 percent. Analysts expect Under Armour to deliver annual sales of $5.3 billion for the 12-month period ended Dec. 31 — which represents a 3.1 percent growth rate.

At the much larger Nike, annual sales have shown steady growth of between 6 and 7 percent year-over-year, for the past five years. Nike’s annual sales are about $39.8 billion, and analysts have credited the company for delivering must-have products — especially around the holidays and key sporting events. For this holiday season, Nike’s Sportswear 2019 Holiday Collection includes joggers, Sherpa-style fleece liners and classic hoodies.

Other winter-themed collections include the Nike Icon Clash collection, which the company said features a “versatile line of mix-and-match workout pieces rooted in basketball design.” Nike said in a statement that the collection is “sprinkled with feminine glam, such as gold and silver metallics, and paired with detailed stripes, jersey fabric and engineered knits, the pieces are tailored for a variety of workouts and transition easily to daily runways.”

Collaborations are also helping to boost activewear sales. At Lululemon, for example, the ath-leisure brand is currently touting its partnership with Roksanda Ilinčić. The collection features bras, tights, skirts and accessories. Lululemon is also positioning its fleece jackets, crew-style tops and boyfriend box Ts for the fall-to-holiday transition period. 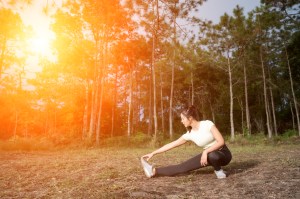 “From a product standpoint, exclusive collaborations, premium styles, and retro launches should continue to fuel customer demand,” Telsey said in a report this week. “In terms of brands, Adidas, Nike, and Lululemon are likely to be the winners during the holidays.”

Telsey said she expects Adidas’ non-apparel sales to grow double digits in the fourth quarter, “as it benefits from new Yeezy launches, such as Yeezy Boost 380, and waning supply chain constraints in mid-priced apparel.”

Expected to fuel more growth at Lululemon is the rollout of the company’s “loyalty program and new streetwear brand, Lab. That said, shifts in consumer shopping habits toward direct channels is likely to result in modest Athletic Store sales growth of 3 percent year-over-year,” Telsey said.

“By retailer, Dick’s Sporting Goods should have a solid holiday season, as it laps easier comparisons and benefits from private label, an enhanced footwear offering with more lifestyle product, and digital, given its two new e-commerce fulfillment centers (New York and California),” Telsey added.

Dick’s Sporting Goods is also well-positioned to leverage explosive growth in the outdoor recreation segment, which is anchored by activities (such as camping, hiking, trail running, rock climbing and kayaking) that converge hospitality and the experiential economy under the “adventure tourism” moniker. Whatever it’s called, one thing is clear: It’s big business for brands.

According to the Bureau of Economic Analysis, outdoor recreation grew 3.9 percent in 2017 (the latest year of data available), “faster than the 2.4 percent growth of the overall U.S. economy,” researchers at the BEA said in a report last month. 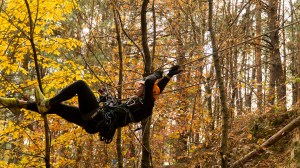 “The U.S. outdoor recreation economy accounted for 2.2 percent [$427.2 billion] of current-dollar gross domestic product in 2017,” the BEA said. The researchers said that in terms of real gross output, “compensation, and employment all grew faster in outdoor recreation than for the economy as a whole.”

The economic trend confirms what retail analysts have been saying, notably that consumers prefer experiences over “buying stuff.” In apparel, companies such as Nike, Under Armour, L.L. Bean, Columbia, Orvis and Eddie Bauer have repositioned their brands to lure in shoppers dressing for adventure. This includes performance activewear, base layers, sports bras, headwear, shells, rain gear and UV-protection apparel.

Key to this trend is travel tourism. Researchandmarkets.com said in a recent report that the “global adventure tourism market was valued at $444.9 million in 2016, and is projected to reach $1.4 billion in 2023, registering a [compounded annual growth rate of 17.4 percent from 2017 to 2023].”

The authors of the report pointed to the impact of social media as “inducing” a desire to travel, and as a result, bolstering adventure tourism and related activities. Researchandmarkets.com described adventure tourism as traveling that is done “outside a person’s regular environment.”

“Adventure travel may involve various adventurous activities such as caving, climbing, cycling, hiking, hunting, rafting and others,” researchers at the firm said. “Tourism is one of the most rapidly growing sectors, while adventure tourism is one of its fastest-growing segments.”

Through this lens, the conventional core activities garnered 30.6 percent of the total economy of the market while other core activities made up 19.3 percent and supporting activities represented 50.1 percent. The BEA also said retail trade was “the second-largest sector contribution to outdoor recreation nationally, accounting for $95.7 billion of current-dollar value-added.”

For now, the momentum of ath-leisure, activewear and “outdoor adventure” apparel doesn’t seem to be slowing anytime soon. And for DTC brands, in particular, the growth of e-commerce and improved personalization technologies along with textile innovations, should sustain the market for some time, analysts noted.

And more importantly, these activities are being positioned as “four-season” experiences. That means spending on activewear, year-round.