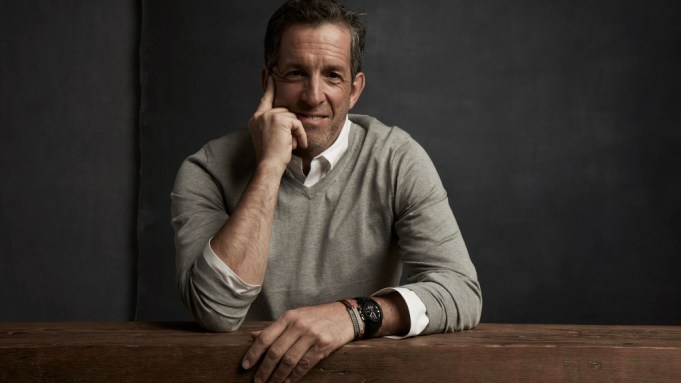 For its first virtual gala, the 42nd annual American Image Awards delivered a slate of honorees that included the Alibaba Group, Ralph Lauren Corp., Brandon Maxwell, Bravo/”Project Runway,” and Kenneth Cole, along with his surprise presenter, Gov. Andrew Cuomo, who happens to be Cole’s brother-in-law.

The event, presented by the American Apparel & Footwear Association, benefits the Council of Fashion Designers of America Foundation.  The virtual event was emceed by CNN anchor Brooke Baldwin and host, designer and author Jeffrey Banks. Over 500 invited guests logged on, although officials declined to reveal how much money was raised.

“Tonight this online celebration brings to life what a truly impactful, resilient and inspiring industry that AAFA represents. COVID-19 has deeply impacted us in many ways. For us, resilience means more than spring back, it means spring forward,” said Steve Lamar, president and chief executive officer of AAFA, who opened up the program standing in front of the Lincoln Memorial in Washington, D.C.

CaSandra Diggs, president of the CFDA, said, “This year has been a very difficult one for the fashion industry and the world at large. Hit by the COVID-19 pandemic, like our friends at the AAFA, the CFDA immediately pivoted to help our industry navigate this unprecedented time. We are incredibly proud of our efforts to support designers, factories and retailers through A Common Thread.”

Turning to the evening’s awards, CNN’s Baldwin said, “Year after year, you have proven to be an industry built on creativity and constant innovation…you have proven time and time again that fashion can be a catalyst for social activism and political change, and we have definitely seen that, especially this summer, and you have also shown that fashion means business.”

“We created the show to showcase some of the best designers across the country along with their remarkable stories. With ‘Project Runway,’ we strive to highlight the evolution of exclusive and diverse fashion. Whether it’s through our designers, models and innovative challenges, our goal is to reflect the world around us, in order to promote evolution in the fashion industry,” said Forstadt.

The Retail Innovator of the Year went to Alibaba, which was founded in 1999 by Jack Ma, and today reaches 800 million consumers in China and is growing around the world. More than 250,000 brands and millions of small businesses run storefronts on Alibaba’s marketplaces.

Michael Evans, president of Alibaba Group, said, “Donning  a tuxedo and going into an empty office and pretending to accept an award from Brooke Baldwin is not something I ever expected to do. But in these extraordinary times, we have to think outside the box and innovate. That is certainly truer today than ever before. A global pandemic, lockdown, store closures, supply chain disruptions, you name it, in 2020 we have seen it. The fashion industry has been especially hard-hit. Innovation is not only needed in times like this, it may be the difference between surviving and not. That’s why winning the Retail Innovator of the Year Award in 2020 means so much to Alibaba.”

In accepting the Designer of the Year Award, Maxwell, who has been in business for five years, said, “There’s nothing like getting an award that says Designer of the Year delivered to your house after you’ve been in your pajamas sitting in the same room for six months wondering where your life is going.

“This time has been wild and weird, and has also amplified for me all the things I knew to be sure about the industry I love being in so much. It’s filled with not only creative people, but incredibly strong people who go to work every day, and fight for things that are hard and bring beauty into the world. During this time we’ve not only seen our community bring beauty and joy into the world, but also help so many people who need it, and it’s made me incredibly proud to be a part of this New York fashion community. I wake up every single day so grateful and excited to be a part of this wonderful group of very talented people. I don’t know why I have been chosen, but am very grateful.”

Patrice Louvet, president and ceo of Ralph Lauren Corp., accepted the award for Company of the Year and thanked AAFA for being an important and powerful voice for the industry. “It’s an honor to accept this award on behalf of Ralph, and our Ralph Lauren colleagues around the world. This is a testament to their commitment and creativity, their passion and dedication and especially their agility and resilience during truly unprecedented times,” he said.

“I believe firmly that fashion does have a future worth celebrating. Ralph has always said our business isn’t about making clothes, it’s about dreams, defining them, and bringing them to life and inspiring others to do the same. It’s about having a purpose, a vision and standing for something. That, I think, is going to shape the kind of future we as companies and as an industry create,” said Louvet.

Cuomo was there on behalf of Cole, who won Person of the Year.

“Kenneth Cole has been my brother-in-law for 32 years, I’ve watched him build his business,” the governor said, adding that he actually tried to help Cole build his business and had many good marketing ideas, which Cole rejected.

Addressing Cole’s award, Cuomo said, “He’s not just a great businessman, but he’s a great person.” He said Cole has used his platform and his resources to bring “global attention to issues of social justice.”

“He’s a man unafraid to speak and advertise his mind and his opinions, even when it’s easier to stay silent. This year, when COVID-19 increased anxiety, loneliness and fear, he launched the Mental Health Coalition to end the stigma around mental illness,” said Cuomo. In the Eighties, when the AIDS epidemic was just breaking he “courageously created a campaign that brought the issue to the forefront.” As the United Nations Goodwill Ambassador for HIV-AIDS, he shares his efforts with a global audience, said Cuomo.

Cuomo praised the way the fashion industry overall has handled the pandemic.

“Despite the difficulties your businesses faced during COVID[-19], you stepped up to offer support and resources, transforming your factories and design rooms to produce P.P.E. You even turned masks into a fashion statement,” said Cuomo. “Heart, soul, community and unity. That’s what the fashion industry showed this year. For all this pain, the unity was beautiful.”

In accepting his award, Cole thanked Cuomo for everything he’s done for his family and the family of New York. “In a vacuum of leadership, you’ve guided us through the most challenging of times we have all ever collectively faced. New York was one of the earliest and hardest hit states by COVID[-19], and under your leadership, is now one of the best off. Your actions, your resolve and your leadership, changed countless lives, as we’ve gone from worst to first. Most importantly, you’ve brought us clarity in a time of confusion and lightness in a time of darkness.”

Cole said nobody could have imagined that people would have to navigate a global pandemic, while socially engaging, self-isolating and social distancing. He described the challenge of not just shelter-in-place, but to be productive in that same place.

He said it’s odd to accept an award when there are so many people doing so much, such as essential workers and heroes in the industry. “This fashion industry has always been creative, resourceful and resilient. I am confident we’ll just not survive in a P.C., post-COVID[-19], world, but I am sure it will thrive as it always does.”

Cole added: “My story in the end is one of an American designer to use the platform he has to make the difference he can. I believe our biggest challenge today is to find a reason to exist in people’s already crowded closets, while respecting the health of our planet and the physical and mental health of its inhabitants.”