The mood at the spring market here reflected the downward slide of stocks, but there was some relief from retailers.

By Elizabeth Thurman and Georgia Lee on November 4, 2008
View Slideshow 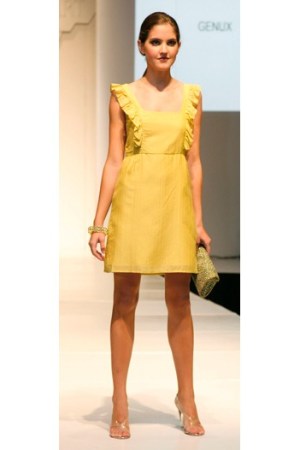 ATLANTA — The mood at the spring market here reflected the downward slide of stocks, but there was some relief from retailers who wrote orders for spring or picked up immediates.

Buyers at the four-day market at AmericasMart that ended on Oct. 14 generally stuck to their core lines, mixing in special item pieces such as novelty jackets, bright tunics and dresses, along with visually interesting accessories to entice customers.

Julie Routenberg, owner of Potpourri, a bridge-priced specialty store with two Atlanta locations, said caution had “trickled up” from moderate to high-end consumers.

“The economy is no longer just affecting the Wal-Mart shopper,” she said. “Wealthy consumers are not buying.…My biggest fear in buying is that we’ll give a party and no one will show up.”

With a budget that is down 12 percent, Routenberg said she purchased spring deliveries, especially as “vendors are now cutting to order.”

Concentrating on only the most special items to lure customers, she bought wide and broad, from many vendors, to mix lines. Along with core lines, including Yansi Fugel’s travel jersey and LaFayette 148’s separates and knits, Routenberg picked up a new label, An Ren, buying whimsical, mixed-media jackets.

She noted newness in the market, in citrus colors for spring, and new shapes such as shorter tunic tops and jackets. She also bought more dresses, a strong category now, for spring.

Janet Wilfong and Pam Somers, owners of Celebrity, a high-end special occasion store in Atlanta, had not written an order by Oct. 13, the third day of the market, and did not plan to attend the next day.

“We were reluctant to even come to the Atlanta show,” Wilfong said. “The only reason we’re here is to fill voids and gaps. We are squeezing our budget to death.”

Wilfong, who cut her spring spending in half, reported a sizeable decline in business beginning at the end of September.

Wilfong and Somers searched for jewelry and accessories to complement long gowns and skirts by Marissa Baratelli and Rose Taft, spring pieces they picked up in New York.

Karen Bull, owner of Karen’s Fine Apparel in Duluth, Ga., attended for trend direction but did not purchase any merchandise. She is coping with a 15 percent decline in year-to-date sales, and said the financial turmoil was having an unprecedented impact.

“In 21 years of business, I’ve never seen anything like this,” Bull said. “Customers are afraid to come in because they don’t want to be tempted. It’s affecting every income level, including people who are watching their 401(k)s decline.”

In an effort to compensate, Bull is cultivating professional career women who are still buying. She is spending more on events, including networking parties and trunk shows for executives.

Lisha Orman and Jean Stratton, co-owners of The Ladies Shoppe in Nashville, which is opening Nov. 15, bought for spring and some immediates, focusing on special occasion pieces by Kay Unger, better dresses by Maggy London and bridge sportswear by Ellen Tracy.

The 2,500-square-foot freestanding store targets women ages 45 and up, a customer base that is virtually unaddressed in Nashville, Orman said.

“The economy hasn’t had as large an effect on our customer,” she said. “They can’t find our type of merchandise anywhere else in the area.”

Lawton Hall, senior vice president of leasing at AmericasMart, said, “We didn’t know what to expect. [The show] wasn’t the best, but it was good.”

Accessories, especially shoes, and young contemporary apparel performed well, Hall said, adding that the industry will weather the economic maelstrom. “Once the election is over and the government puts [new programs] in place, the credit crunch will be eased and things will improve.”