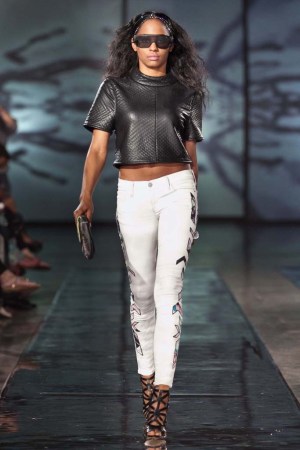 ATLANTA — Retailers at the Atlanta Apparel Market, which closed its five-day run on Monday, opened their fall budgets for leggings in various different textures, colors and fabric treatments, including stretch vegan leather and quilted fabrics.

They also went for plaid, high-low tops, leather and real and faux fur embellishments, as well as scarves, and cashmere and other luxury fabrics.

Also, the “Downton Abbey” series influenced some trends, including oversize tops and lace and crochet. Quilting was strong in jackets. Fall colors included gray, black, neutrals, navy, royal blue and burgundy, with shades of orange as a pop color.

Kim Kidd, owner of The Willow Tree, based in Centre, Ala., with four stores, said her sales through March were up about 10 percent, despite being closed for several days in January because of snow and ice.

Ben Belton, owner of Benjamin’s and Libba’s, in Morganton, N.C., said harsh winter weather was challenging for his two stores, but sales were OK.

“We feel very positive about the rest of the year because we see the economy improving, plus a change in product categories at our stores that people will be excited about,” he said.

Retail attendance was even with a year ago, said Lori Kisner, senior vice president of apparel at AmericasMart. Exhibitors in the show’s temporary area increased 18 percent over the April 2013 edition, with 30 percent new to the marketplace. New temporary exhibitors included Canadian designer Robert Kitchen, a contemporary woman’s line showing in the Premiere Luxe area.

A social occasion market, started in April 2013, was re-branded this year and named Vision. Held April 1 to 3, attendance for this show was up dramatically, said Kisner.

“It’s very much a national market, and we’re working on making it an international market,” she said. “One of its strengths is it overlaps with this [regular] show.”

Showroom owners said retailers wrote orders that were deeper and farther out than in the past thanks to confidence in the economy and in trusted products.

Belton booked 65 percent of his fall open-to-buy at the show, saving dollars for later as trends change. He was less aggressive in buying jeans, adding, “People are starting to have confidence in dressing [up] again.”

Carol Dickerson, owner of J.W. Tweeds in Blowing Rock, N.C., said she is seeing more structure and surface interest for fall, as well as a lot of grays and color mixed with grays. She booked jackets, tops and leggings, and said pleather and cashmere were important fall fabrics.

Thomas Heery, owner of Heery’s Clothes Closet in Athens, Ga., booked about 60 percent of his fall, buying cashmere sweaters, anorak jackets by Filmore and Ciao Milano, and solid-color tops. Heery said sales for his two apparel stores are up 6 to 7 percent this year over the same period in 2013.