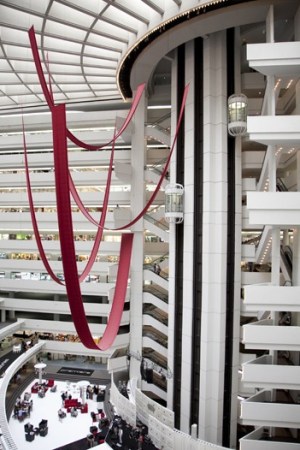 ATLANTA — AmericasMart officials are banking on a typically strong social occasion market in August and growth in the contemporary apparel and accessories categories to carry them through the second half of this year, while continuing efforts to strengthen Atlanta’s image as a viable wholesale buying destination.

Meanwhile, business in the Atlanta marketplace is still trending toward mostly immediate deliveries, a result of the recession that Lori Kisner, senior vice president of leasing, said isn’t likely to loosen up for at least six months.

“Our last spring and fall shows were sort of disappointing, in terms of the number of orders written, because buyers want to write them as close to the deadline as possible,” Kisner said. “I do think that we’re in a recovery mode, but I think it will be at least the end of 2010 before we start to see any gains. Our recovery is going to be a slow creep.”

However, signs of such a recovery are evident. Consumer confidence continues to make modest gains and market attendance has increased “quite a bit” since last June, said Kisner, who also noted a recent uptick in new store openings as an indication of potential market growth.

“This time last year was really tough, but a year later, I’m sitting here thinking that things are just fine and that we’re in a rebuild mode,” Kisner said. “We got hit six months after the bottom fell out economically, so I think there will also be a lag in the time the economy starts to recover and the time that [wholesale market centers] will start to feel those effects.”

The social occasion category, long the linchpin of the Atlanta Apparel Market’s August edition, which will run this year from Aug. 26 to 30, is touted by mart executives as the nation’s largest prom market and also will focus on pageant, mother-of-the-bride and bridal, a category that Kisner said has changed during the economic downturn.

“Social occasion has been a real bright spot for us, but if anything’s taken a hit, it’s been bridal,” she said. “It’s not that people are buying fewer gowns, but they’re buying different gowns. There’s a huge trend right now in destination weddings, where people don’t wear the typical bridal gowns, and we’re seeing manufacturers offering styles with a more ready-to-wear sensibility.”

AmericasMart also plans to open in August or October the entire west side of the ninth floor, an area that will be devoted to contemporary resources that are new to the market, an initiative that Kisner said is designed to address inconsistency within the category.

“Ready-to-wear is our stronghold, but contemporary has always been more up and down,” she said.
Although AmericasMart moved out of the men’s business about two years ago, Kisner expects to draw more crossover men’s buyers with the expansion since many women’s contemporary lines now offer men’s.
In the accessories area, more high-end lines will be introduced over the next six months in order to balance the price point range.

“Lower-end items have been selling best, but I think we’ll be coming out of that soon,” said Kisner, adding that more footwear lines will be incorporated into the accessories product mix.

In addition to adding more resources and fine-tuning existing areas, AmericasMart is stepping up its marketing efforts, not only to improve buyers’ market experiences, but to promote Atlanta as a convenient and affordable wholesale destination. To this end, the mart is now working with all marketing platforms, including online, radio, TV, direct mail, social media and a newly introduced look book, which features editorial shots of lines shown in the building and is being mailed to new buyers and manufacturers. The mart also will continue to offer buyer perks such as discounted hotel rooms, which are all within walking distance to the mart, reducing the need for expensive taxi rides.

“Buyers can get everything they need right here in a vertical market without having to fly over our heads to go somewhere else,” said Kisner.