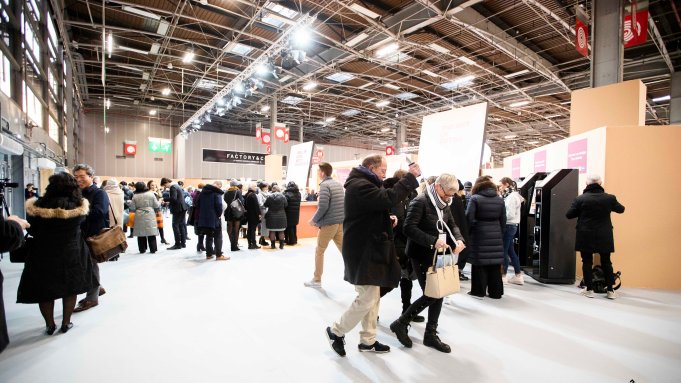 PARIS — Heritage lingerie brands looking to transition to new models are seeing the results of their efforts while demand for young, edgy brands remains strong. But overall, the global lingerie market remained difficult last year, and this was starkly apparent at the recent Salon International de la Lingerie and Interfilière trade shows here.

Traffic at the two shows, held from Jan. 19 to 21 at the Porte de Versailles exhibition center, dropped 10 percent year-on-year, according to organizer Eurovet. “This edition nevertheless remains in line with the realities of the market, which is declining globally,” Eurovet stated.

Sources suggest that global premium lingerie sales fell by around 5 percent last year, following a flat year in 2017. “There is a definite Trump effect that is perturbing business, and in France the yellow vest protesters are impacting consumer sentiment; there is also the effect of the #MeToo movement,” said Lise Charmel managing director Olivier Piquet. “But this is a call to be more creative and to create a dialogue with consumers.…Those who have faced up to the new reality have seen growth, while those that rest on their laurels are stagnating,” he continued.

“The market is demanding change,” said Galeries Lafayette buying manager for women’s wear and lingerie Pascale Camart. “It’s a complicated sector, for lingerie for day at least, which has rested on its laurels of corsetry know-how and high prices, and it’s a positive thing when someone uses their know-how to evolve and bring something new.”

At the show, she praised the infusion of color making its way into the collections as well as the integration of softer, more natural shapes like bralettes and crop tops into core brands’ offers as a move in the right direction, highlighting Groupe Chantelle as spearheading the movement. “I hope this pushes the rest of the market to evolve,” she said.

Groupe Chantelle’s chief creative officer Renaud Cambuzat said the firm is beginning see the fruits of its revamp to focus on a more consumer-oriented and fashion-driven discourse. “The feedback is positive,” he said, adding that the group’s sales were flat last year. “It’s true that on the retail customer side there was a lot at stake in terms of the change in vision, they could have been worried about the changes implemented on a product level, but the department stores in particular understood the shift immediately,” he said. “There was a risk that we would lose existing customers, and that has not been the case.” On the firm’s stand, Chantal Thomass’ new identity was visible for the first time, with a sportier line-up that nevertheless maintained the brand’s codes.

Simone Pérèle is also reaping the benefits of transitioning to a direct-to-consumer strategy thanks to a focus on online and its own boutiques. “All the projects we have initiated in this direction have been fruitful,” said chief executive officer Mathieu Grodner. “Our boutiques and digital have been major sales drivers.” The company’s sales were flat last year in a declining market, he said. The label now does half of its sales through its own retail network, including directly managed department-store concessions, versus 20 percent four years ago, Grodner revealed. Some 5 percent of its sales now stem from online, a proportion the firm hopes to up to 10 percent within two to three years.

As well as focusing more on retail and direct-to-consumer, Simone Pérèle is also broadening its offer in categories including swim and loungewear. New for fall 2019 is a maternity line with removable underwiring.

“The market is difficult overall, but it depends on the country,” said Aubade deputy managing director Martina Brown. “You really need to differentiate. The French market was difficult because of the political situation, but in the U.S. we don’t have any indication of a downturn, [although] the market is changing.”

The brand is ramping up its presence in key department stores this year, especially in Europe. This will include a pop-up at Harrods in London set for August as well as openings in Oberpollinger in Munich and Galeries Lafayette in Berlin, both planned for March.

“The crisis is general for retail, it’s challenging, but the good department stores remain strong in changing markets. They get the message that the shopping experience needs to be seamless and emotional,” Brown said. Aubade will also be introducing its e-shop, launched last year, in new markets in coming months, and has high hopes for its collaboration with Viktor & Rolf on a capsule launching in June, as reported.

U.K.-based Agent Provocateur’s presence at the show was a highlight for many buyers as the brand opens up for wholesale for the first time. Among the highlights on its stand, there were vintage-inspired pieces in pink silk and a rose print on a black background, colorful embroideries as well as lots of metallic details.

“I’m glad to see that Agent Provocateur is starting to do wholesale,” said Stephanie Jacek, owner of Le Bustier in Washington, D.C. “I love the laces, and the greens, reds and mustard yellow,” she added.

Trends at the show included a shift toward more fashion colors like yellow, khaki and russet, and lots of peacock blue, as well as more pastel shades than are usual in the fall collections. The crossover between lingerie, activewear and daywear was more apparent than ever, with increasing numbers of heritage brands upping their focus on comfortable pieces, especially wireless bras, and items that double up as daywear, as well as a focus on lighter, simpler fabrics and constructions and more lightweight solutions being transposed into bras in larger sizes and shapewear.

Chantelle, for example, offered an expanded range under its bestselling one-size-fits-all Soft Stretch line. Introduced in 2016, the line has sold 3.5 million units so far. It has added a padded V-neck bra as well as panties and tops with elastic bands featuring the brand’s logo to the lineup for fall, as well as a range of 30 different colors and prints.

Another example, Maison Lejaby introduced La Petite Lejaby, an entry-level line made from molded Modal priced at 25 euros for panties and 50 euros for a bra available in four shades. “We sense that customers are looking for items that are more accessible and more natural,” said collection manager Karen Piekarski. “Our response is integrating innovative fabrics that allow us to offer the support and fitting that correspond with today’s market. Younger consumers are looking for lingerie that is much more lightweight.”

The Exposed section, which groups together creative brands with the aim of offering a curated proposition for retailers seeking differentiation, continued to garner attention from buyers. “Exposed is the place where we spend the most time [at SIL], but because of that I’m not sure we are not missing things in the rest of the show,” said Galeries Lafayette’s Camart.

She cited La Superbe, which focuses on retro-inspired high waist panties, as one of the highlights at Exposed. Other buzzy labels included Dora Larsen, created in London by Georgia Larsen, an ex-buyer for Topshop, and her husband and launched two and a half years ago.

The label, which creates colorful but feminine pieces with a vintage twist, has around 100 stockists worldwide including Liberty in London and Nordstrom in the U.S., and average retail prices for a bra are around 50 pounds. Highlights in the brand’s fall collection included a range in mustard yellow, peacock blue and bright pink.

Poland-based Undress Code’s quirky bodywear, meanwhile, integrates fabrics like alcantara, cotton and velvet. Sold in Galeries Lafayette and online with Zalando, the label’s pieces range from 100 to 120 euros at retail.

Istanbul-based Else Lingerie expanded its offer made from recycled yarn and expanded its leisurewear offering. “There are a number of great emerging brands, the market is so dynamic, the big guys are going to have difficult times,” said Else ceo Cenk Türkay. “Women are looking for more comfort and that is one of the key values of the brand.” The label will launch its own permanent store in Los Angeles in March.

In contrast with the trend towards more comfortable, flexible lingerie for day, certain buyers cited a return in demand for more sexy looks. “It’s very exciting all the sexy lingerie, no-one wants normal lingerie anymore,” said Giovanna Ventura, owner of Segreti Concept in Naples, Italy, who said that the market is increasingly difficult for her as consumers dedicate less budget to the category. She cited the offer at Exposed as well as Agent Provovateur among her highlights.

At Interfilière, the focus for spring 2020 was on natural fibers, with a reported uptick in demand for alternatives to the synthetics that have dominated the market in recent years for their technical properties. Recycled fibers and solutions using linen, hemp and nettle, for example, were highlighted. Belgian stretch fabric specialist Liebaert, which returned to the show after an absence of several years, introduced a new fabric made from Lycra and recycled polyamide that it has high hopes for in the future, as well as new jacquard innovations featuring Lycra Beauty and Lycra Sport technologies.