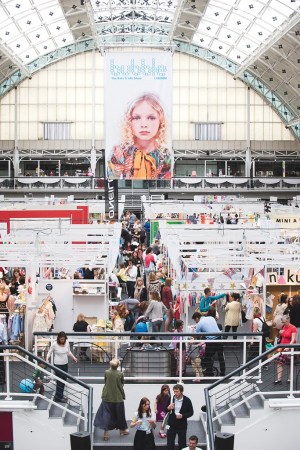 Despite a tough economic climate, they’re approaching the upcoming season with a positive outlook. While some are focusing on expansion or upgrading their show space and extra features, others are looking to fresh brands to boost numbers.

“The biggest challenge to us all is to remain positive when faced with such an extended and wide-reaching economic climate,” said Carole Hunter, director of marketing for LondonEdge Original, LondonEdge Fashion and The Ledge, which showcases the alternative and streetwear market. “The U.S. appears to be finding its way through the storm and where the U.S. goes, the U.K. usually follows. That said, there is room for optimism. We expect, at the very least, to sustain the same numbers as 2012 both in terms of exhibitors and buyers.

Hunter said the show is introducing some new focused areas that are expected to generate interest. That, as well as the continued growth of the Ledge show and the introduction of Snow within it, brings a favorable outlook.

Linda Hoyes, event director of Bubble London, which focuses on children’s wear, remains upbeat and eager for the upcoming season.

“I’m looking forward to innovative new collections and fresh optimism after what was a difficult summer season for most brands and retailers in the U.K. and Europe,” Hoyes said. “Obviously, the economic climate makes things tougher for everyone and we all have to work harder to gain and retain success. I think it is important for organizers to manage brands’ expectations, especially those that are launching into difficult trading conditions. Bubble London is lucky that it attracts some very unique and exclusive collections that have been largely unaffected by the downturn, but obviously some of the more established brands have been badly affected.”

She said the exhibition can only be a reflection of what is happening outside, “but we try our best to encourage retailers to look at new product and offer their customers something different and unique that is worth investing in. I believe that trade exhibitions are even more valuable when trading conditions are difficult.”

The bridal market, meanwhile, has shown substantial growth and continues to persevere.

“Coincidentally, the wedding market and exhibition industry have remained remarkably buoyant over the past couple of years,” said Alex Butler, sales manager of The National Wedding Show. “Featuring three dedicated bridal areas, the show now offers retailers and designers a platform to display and sell collections.…While other industries and media types have suffered, the wedding industry has continued to weather the storm as couples continue to get married. The wedding show market has doubled in size over the past couple of years.”

Many of the exhibitors are focusing on expansion. Bubble London will expand the show into a new hall this season, which will accommodate more of the smaller Bubble GUM stands. It is also developing a visitor program that will provide retailers more pre-show information and a more personal service.

“We believe it will give great visual impact to the January edition,” said Hoyes. “We are looking to introduce a new concept for June 2013, and this is still in the planning stages, but it will create extra value for those retailers attending the show.”

She added that the team was also extending the Bubble GUM area, which attracts add-on product and accessories.

“We will also be introducing the Bubble Hub, which will be a drop-in desk to help retailers get the most out of the show when they are there. It will also help give the Bubble team more opportunity to interact with buyers,” said Hoyes.

LondonEdge Original, LondonEdge Fashion and the Ledge are developing new features. They include London X, for more risqué lingerie; The Festival Tent, which aims to supply music festival-goers with clothing and lifestyle products; Horror & Costume and the continued growth of VintEdge, which is vintage, reformed vintage, vintage-inspired and craft-inspired clothing and jewelry.

Moda, which features contemporary and classic apparel and accessories, will be enhancing its venue with a second runway. There will be new shows devoted to footwear, men’s wear and its urban, street and denim show Flip, which was launched last season.

The new runway theater will enable Moda to increase the number of business seminars. In addition to the second edition of Flip running alongside Moda, they will also showcase Adorned, a new area for new, niche and directional brands at Moda Accessories.

Textile Forum, which is celebrating its 10th anniversary, plans to feature more companies that manufacture in the U.K.

“The economic climate will continue to be tough, and they say when the going gets tough, the tough get going,” said Linda Laderman, cofounder and organizer. “I think this is demonstrated by the number of new businesses that attended the show, as well as representatives from global brands and leading edge designers. The demand for British made product will still be in vogue in 2013 as companies want the ‘heritage’ and also want to source closer to home.”

“Over this length of time we’ve seen the economic state of retail go up and down, but we’ve also observed that the strongest stores are the ones who understand that they need to provide their shoppers with a reason to go to them,” he said. “Whether it’s Urban Industry picking up on new U.K. streetwear brands, or a young women’s wear label like Emily & Fin being ordered by Coggles or Asos.com, the forward-thinking stores know they need exciting new products to maintain a difference from the high-street stores who all stock the same cookie-cutter brand list.”

New labels and creativity are the focus for Scoop International, a boutique trade show that features a global roster of designers.

Stitch, which focuses on men’s wear, has adjusted its show dates to accommodate buyers.

“We have moved to a midweek date line to fit better into the buying calendar in this tough climate. Our aim is to increase footfall and ultimately build on the show’s success,” said Jennagh Delaney, brand manager.”