The city's factories could be the beginning of a new breed of entrepreneurial manufacturer with a new business model: high-end pieces in smaller batches. 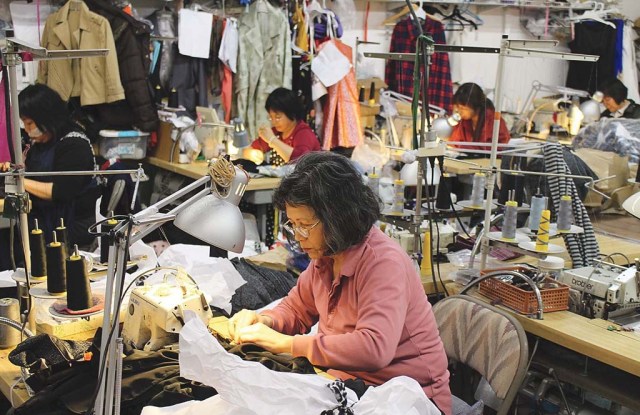 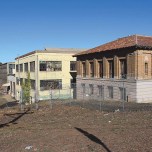 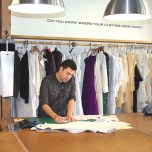 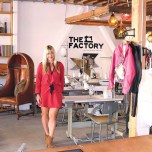 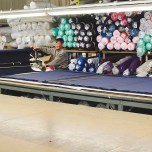 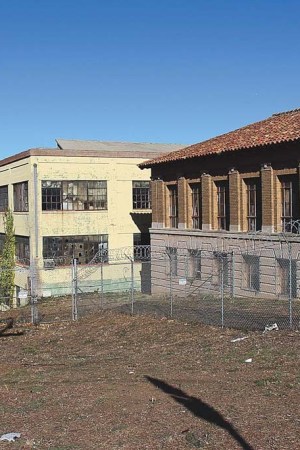 The former facilities of Eber International, a women's, misses' and juniors' outerwear company that used to manufacture in San Francisco. 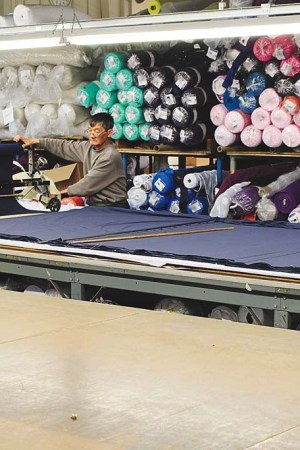 SAN FRANCISCO — The apparel manufacturing industry in this town was nearly extinct just a few years ago, but today there are not enough workers to supply a surging demand.

During the industry’s peak in the Seventies, the city was home to more than 1,000 sewing factories that contracted with the likes of Esprit, Bebe, Byer California, Eber and Gap. At the time, the U.S. manufactured 75 percent of its own clothing. By 1994, cheaper labor costs abroad and the passing of NAFTA made outsourcing a more efficient option for large West Coast-based clothing brands. Then, in 2004, the Central America Free Trade Act helped push domestic clothing manufacturing closer to today’s figure, only roughly 5 percent.

As high-volume orders left San Francisco sewing factories in favor of cheaper labor overseas, others managed to survive largely by working with more specialized, high-end local designers such as Erica Tanov and Julie Weston. Today, there are more than 25 factories — a far cry from the Seventies — but they’re thriving and could be the beginning of a new breed of entrepreneurial manufacturer with a new business model: high-end pieces in smaller batches. To encourage a higher quality of work, sewers are often paid hourly instead of per piece, allowing for more detailed attention to each item.

According to Janet Lees, senior director of SFMade, a nonprofit that supports local manufacturing and serves as a connector between designers and sewing contractors, there are nearly 2,000 people employed in local apparel, bag and accessory design and manufacturing. Other locally designed consumer goods include food and beverages, furniture and pet products. In 2013, local manufacturing added almost 13 percent net new jobs; the apparel industry was responsible for nearly a quarter of that total, which amounts to roughly 120 new jobs in local apparel this year.

“There’s a confluence of factors contributing to the recent success,” said Lees. “Technology has really taken away the barriers to entry — people can get a site up and use crowdfunding to make small batches. The risk is relatively low because you’re not holding inventory.…For the first time in a long time we’ve got grads and folks who want to start their business here believing that it’s achievable in the city.” Lees pointed out that in addition to more control over the product, designers who stay local can take advantage of a quick turnaround — about four weeks.

In a bustling sewing factory on the city’s outskirts on a recent visit, the phones never stopped ringing. “They all call me and say, ‘Do mine first,’” said Jeannette Guo, owner of Jeannette Inc. “I go crazy sometimes.”

Guo is affable and energetic, and her petite frame and pixie haircut give an impression of someone years her junior. In between answering incessant calls on her headset, Guo shows off her factory’s handiworks — all of it contracted by local designers. Fine wool coats for San Francisco darling Erica Tanov; structured faille dresses in gemstone palettes by relatively new Kirribilla, and elegant silk blouses by Amour Vert, an eco-fashion line founded in 2010.

When Guo emigrated from China’s Guangzhou province in 1994 and opened shop, she only had two employees. By 1999, she employed around 20 “ladies” — immigrant sewers mainly from Guangzhou. Guo’s primary business was knitwear for Margaret O’Leary until 2006, when the designer began moving manufacturing to China. To avoid tying her fate to one label, Guo adopted a new business model, accepting a bevy of small batch contracts with local brands. Jeannette Inc.’s roster now boasts more than 15 popular San Francisco Bay Area-based designers, many less than a decade old, including Podolls, Camilla Olson and Benny Gold. The contracts range from a couple hundred to several thousand units.

Factories like Jeannette Inc. are nearly invisible in nondescript warehouses, sprinkled in the Bayview industrial district and SoMa (South of Market), an area home to seedy strip clubs, luxury shopping and high-tech offices all within a one-block radius.

Designer Jeanne Allen ran Jeanne-Marc with her husband Marc Grant out of San Francisco for 30 years. The label was successful and employed more than 100 workers, but Allen recalled that selling to retailers was one of her biggest challenges because much of the industry’s buying power was centered in New York. “There was a certain stigma when we rented hotels as showrooms,” Allen said. “They’d always know you’re not from there.” For the past two years, Allen has served as executive director of the Macy’s Fashion Incubator in Union Square, helping Designers in Residence learn the ropes of local manufacturing. “We’re starting to get a critical mass of designers,” said Allen. “It’s growing. I can’t prove it yet, but I feel it.”

Jake Wall of The Artful Gentleman, a Designer in Residence, allows customers to preorder the next season’s items online through crowdfunding. “It eliminates waste, and it’s another way to communicate with customers,” said Wall.

Locally headquartered companies with venture capital backing such as e-tailer ModCloth have also been able to bypass the pitfalls of overstocking by allowing customers to vote for their favorite items. ModCloth did $100 million in revenue last year and is growing at 40 percent a year. The democratization of apparel production, it appears, is working. When paired with the cache of local manufacturing, it gives customers an involved feeling that, according to observers, is helping to build brand loyalty.

In March, former tech consultant David Wolfe noted “something missing” in the baggy, logo-covered athletic shorts market. Wolfe wanted something versatile to wear about town, yet high-performance enough to withstand a CrossFit workout. The result was nylon, water-repellent shorts with a drawstring made from military-grade parachute cord. Wolfe and three cofounders called themselves Olivers Apparel. They launched the shorts on funding platform Kickstarter in August. The goal was to secure $10,000. To Wolfe’s surprise, the campaign garnered $271,043 in just one month. “I think people saw the simplicity and quality.” Within weeks of funding, 5,400 shorts were made at West Coast Manufacturing. The factory employs nearly 30 sewers, and is located in a vast warehouse in the Bayview district. Production manager Hudson Ku has been in the business for more than 20 years.

In the Nineties, West Coast Manufacturing employed around 200 people and took up two stories in a coveted building in SoMa that was leased to several tech companies a year ago. Ku used to manufacture for brands like Calvin Klein, Lerner (The Limited) and Tommy Hilfiger, but most of the business went to China in the early Aughts. The business has been revived by working with local designers like Olivers Apparel, Carve Designs and Tart Collections.

At Tart Collections, chief executive officer Jamie Finegold used to work for large lower-end juniors labels before launching Tart, a contemporary women’s line, in 2004. Tart is in dozens of stores across the U.S. and exports to Italy and Australia. “I’m the last of the old-school garmentos,” said Finegold, who learned the business while working for juniors label Eber. “I was chasing the low-end business, and Leonard Eber said, ‘Jamie, let me tell you something, if you’re not a brand, you’re not s–t,’” recalled Finegold. “That was a wake-up call.”

Tart Collections focuses on the “hot, stylish soccer moms market,” with Modal jerseys and formfitting print maxidresses. Roughly 80 percent of Tart’s manufacturing is in China. Finegold wants to change that number. He said five years ago, the cost of making one shirt in China was 30 cents. Today, that same shirt costs up to $1.50, not including the duty (around 30 percent) which applies to the fabric, the labor and even the hanger. Not to mention the cost of lost time when items need to be sent back for changes.

In San Francisco, the labor on a shirt costs $2.50, a slightly higher rate that Finegold said he’s willing to absorb. In the spring, Finegold is launching Tart USA, a basics line for women. He hopes to bring 30 percent of the work back to San Francisco.

Though the owners of contract sewing factories are seeing more work, it’s not always easy to find employees to handle the influx. The factories are mainly run by immigrants from China whose children grow up in a city awash with wealth from tech companies like Twitter, which reportedly created 1,600 millionaires with its initial public offering in November. Such opportunities in the modern Gold Rush make manual labor a less appealing pursuit for many.

“The younger generations want office jobs,” West Coast’s Ku said. “They don’t want to do this kind of work.” In fact, good factories are in such demand that some designers didn’t want to disclose their coveted sources for fear of competition.

Brands like American Giant were willing to share their secrets in support of domestic manufacturing growth. The 22-month-old online brand works with sewing contractor SFO Apparel to produce T-shirts and sweatshirts made from North Carolina cotton. American Giant’s president, Bayard Winthrop, created the brand when he found himself nostalgic for quality cotton basics and saw an opportunity in the market. Winthrop asserts that a durable and scalable business comes from a marriage of quality manufacturing with solid e-commerce.

“There’s a great tectonic shift in industry with Internet apparel,” said Winthrop. “And the patriotic part of me remembers that as a kid, my mom would buy a sweatshirt from J.C. Penney’s that was fantastic and affordable, and it would last.…And now we can’t make a sweatshirt in the United States that is affordable and great? That was part of the inspiration, like — ‘What the hell?’ America has always innovated and been a leader, and that has stalled out in the last 20 years or so. And now to be a part of the reengineering of that has felt, well, kind of good.”